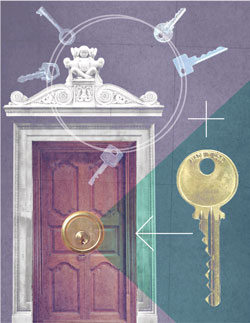 The ABA Commission on Ethics 20/20 has decided not to develop a proposal on whether nonlawyers should be allowed to have some form of limited ownership interest in U.S. law firms.

After the close of the commission’s two-day meeting in early April, co-chairs Jamie S. Gorelick and Michael Traynor issued a statement (PDF) confirming that the commission agreed to shelve plans to submit a proposal on nonlawyer ownership for consideration by the association’s policymaking House of Delegates in February during the 2013 ABA Midyear Meeting in Dallas.

Gorelick and Traynor indicated that feedback from other bar associations and individual members of the profession did not suggest a groundswell of support for revising the ABA Model Rules of Professional Conduct to permit a limited form of nonlawyer ownership. The Model Rules, which are the direct basis for professional conduct rules in all states except California, do not permit nonlawyer ownership.

“Since its creation in 2009, the commission has under taken a careful study of alternative law practice structures,” said Gorelick and Traynor in their statement. “Based on the commission’s extensive outreach, research, consultation and the response of the profession, there does not appear to be a sufficient basis for recommending a change to ABA policy on nonlawyer ownership of law firms.”

Gorelick is a partner at Wilmer Cutler Pickering Hale and Dorr in Washington, D.C. Traynor of Berkeley, Calif., is a past president of the American Law Institute. The commission was appointed by then-ABA President Carolyn B. Lamm to consider possible revisions to the Model Rules in response to the impact of globalization and technology on law practice in the United States. Lamm is a partner at White & Case in D.C.

Alternative law practice structures, known as ALPS, are prohibited in every U.S. jurisdiction except the District of Columbia, which permits a limited form of nonlawyer ownership. But nonlawyer ownership is becoming more common in some foreign jurisdictions, notably Australia, Canada and the United Kingdom. American law firms doing business overseas are in a quandary over how to balance the more permissive rules on business structures in other countries and the more restrictive regulations in U.S. jurisdictions.

Members of the Ethics 20/20 Commission never developed a consensus on whether to recommend some form of nonlawyer ownership. In December, the commission released a discussion draft (PDF) describing a limited form of court-regulated, nonlawyer ownership of law firms that largely followed the District of Columbia model, but that included additional requirements that lawyers in a firm would retain controlling voting rights and financial interests in the firm. That form also required lawyers to make reasonable efforts to establish a nonlawyer’s professional integrity before that person may gain a financial interest in the firm. But the commission never went further than the discussion draft.

“The commission considered the pros and cons, including thoughtful comments that the changes recommended in the discussion draft were both too modest and too expansive, and concluded that the case had not been made for proceeding even with a form of nonlawyer ownership that is more limited than the D.C. model,” said Gorelick and Traynor in their statement.

A DECISION ON THE MERITS

The commission’s decision forestalls the possibility of a tough debate in the House on nonlawyer ownership. At previous meetings of the commission, some opponents expressed concerns that such a proposal would amount to a replay of the House debate in 2000 over a proposal to allow multidisciplinary practice at law firms. The House rejected that proposal. In March, the Illinois State Bar Association’s board of governors adopted a resolution that would call on the ABA House to re-affirm its position on MDP and reject any future proposals that would allow nonlawyer ownership of law firms.

The Ethics 20/20 Commission has refuted arguments that ALPS really stands for MDP, and that question now appears to be moot. But Gorelick and Traynor also emphasized that the commission’s decision to refrain from making any proposals on nonlawyer ownership was made on substantive grounds. “We made the decision on the merits,” said Gorelick in an interview with the ABA Journal after the commission’s meeting.

In their statement (PDF), Gorelick and Traynor confirmed that the commission will continue working on draft proposals that would address choice-of-law issues that might occur in the context of fee-sharing arrangements between lawyers and nonlawyers in jurisdictions, including the District of Columbia, that do permit nonlawyers to have ownership interests in law firms. “The commission previously released draft proposals on these issues, and it will decide at its October 2012 meeting whether to submit formal proposals to the ABA House of Delegates for consideration in February 2013,” said Gorelick and Traynor. “Meanwhile, the commission welcomes additional comments on the previously released drafts.”

The commission also is studying possible amendments to the comments to Model Rule 5.5 that would give lawyers additional guidance about the meaning of the phrase “systematic and continuous presence” in a jurisdiction in accordance with Rule 5.5(b).

But in the meantime, the Ethics 20/20 Commission has business before the House of Delegates when it meets in August.

The commission was expected to submit its formal resolutions and supporting reports to the House before the May 8 deadline. Resolutions submitted by that date will be included in books distributed to the House’s 560 members prior to the annual meeting. Resolutions submitted afterward may still be considered as late reports, but they are distributed to House members essentially on a last-minute basis, and action on late reports often is postponed.

COMING UP IN AUGUST

The commission’s resolutions going to the house for consideration in August fall into these areas:

• Technology and confidentiality. Essentially, the commission is recommending revisions to the Model Rules to clarify a lawyer’s ethical duty to take reasonable measures to protect the confidentiality of a client’s information, including materials stored electronically. The revisions would provide additional guidance on how a lawyer should deal with information that the lawyer was not supposed to receive.

• Technology and client development. The ethics commission’s recommendations would adapt provisions of the Model Rules that relate to advertising, solicitation and other contacts with prospective clients to accommodate various forms of marketing that take place online. Among the issues addressed is when electronic communications might give rise to a prospective client-lawyer relationship.

• Outsourcing. The commission’s recommendations would revise provisions in the Model Rules to emphasize that lawyers and law firms should make reasonable efforts to ensure that services provided by nonlawyers outside the firm are performed in a manner that is compatible with the lawyer’s own professional obligations, including protecting client information from inadvertent disclosure.

• Lawyer mobility. The recommendations include revisions to the Model Rules to address confidentiality and conflicts of interest when a lawyer considers changing firms. The commission also is proposing a rule on practice pending admission, which would allow a lawyer to establish a presence in a new jurisdiction while pursuing permanent admission to that jurisdiction.

The commission is using the weeks leading up to the annual meeting to engage in extensive outreach to other entities represented in the House of Delegates in efforts to build consensus on its package of recommendations.

So far, Gorelick said, “there is a significant amount of support for our core recommendations.”

Print and initial Web versions of "Summer Job," June, incorrectly stated that the ABA Commission on Ethics 20/20 is considering whether to propose amendments to Rule 5.5 of the ABA Model Rules of Professional Conduct "that would clarify when lawyers may establish a presence in a jurisdiction without being permitted there." The commission actually is studying possible amendments to the comments to Model Rule 5.5 that would give lawyers additional guidance about the meaning of the phrase "systematic and continuous presence" in a jurisdiction in accordance with Rule 5.5(b).