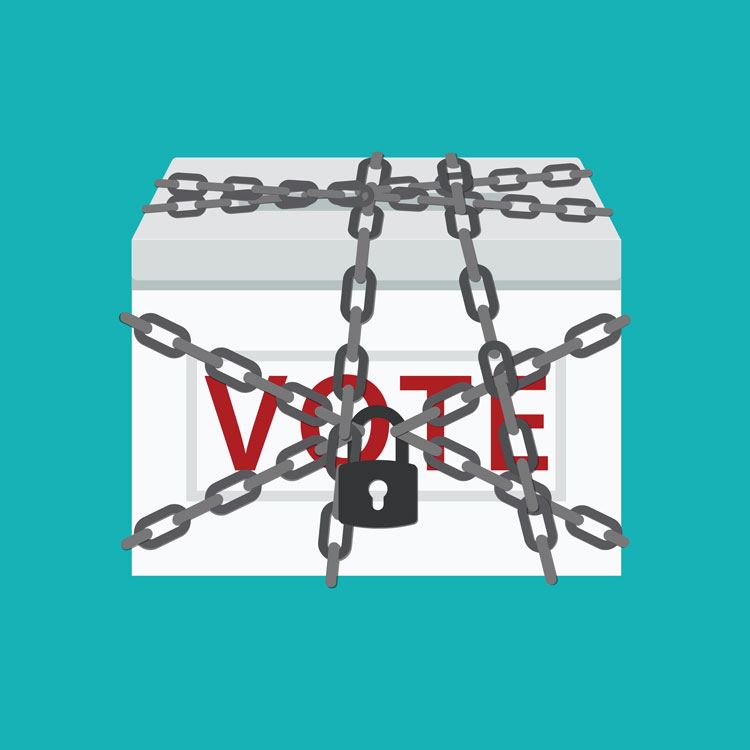 Larry Harmon, a software engineer and U.S. Navy veteran from Kent, Ohio, typically has voted in presidential and gubernatorial elections. But starting with the 2010 midterms and continuing into the next two federal elections, he skipped going to the polls.

“In 2012, I was disillusioned with the candidates and the political process, so I decided to abstain from voting, which was my own way of having my voice heard,” Harmon said in court papers. “There’s no option on a ballot for ‘none of the above,’ so I stayed home and expressed my political preference that way.”

Harmon is now at the center of a major U.S. Supreme Court case regarding the methods authorized by federal law for the states to clean up their voter registration rolls.

In Ohio, after a voter fails to participate in an election during a two-year period, which could mean missing just one election, the state sends an address verification notice. If the voter fails to respond, the state eventually removes the voter.

In November 2015, after skipping those prior elections, Harmon arrived at his polling place to vote in an Ohio state election. “I was told that my name was not in the poll book, meaning I was not registered to vote and therefore could not vote in the election,” Harmon said in a court declaration.

“I was very upset,” he added. “My registration was canceled even though I had not moved, and the state had accurate records at their disposal that would have shown the reality: That I still resided at my address.”

Although Ohio had sent Harmon a notice in 2011, he said he never received it. “Because I had voted in prior elections, I believed I was registered to vote in the 2015 election,” Harmon said. “I do not remember ever receiving a notice in the mail asking me to confirm my address or warning me that my voter registration would be canceled if I did not vote.”

The question posed in Husted v. A. Philip Randolph Institute, which is scheduled for argument Jan. 10, is whether Ohio’s process is consistent with the National Voter Registration Act of 1993.

That federal law, also known as the “motor voter law,” made it easier for voters to register at motor vehicle offices and by mail. But the law also contains detailed provisions that encourage the states to maintain “accurate and current” registration rolls and remove the names of ineligible voters—such as those who have died, those who’ve moved or those convicted of a crime.

The NVRA also specifies that the states’ voter-roll maintenance programs “shall not result in the removal of the name of any person … by reason of the person’s failure to vote.”

Congress amended the law in 2002 to make clear that the states could remove a voter who failed to respond to a notice about potential removal and subsequently did not vote in two or more consecutive general elections for federal office.

The Ohio secretary of state’s policy on cleaning up the voter rolls is at issue in this case. The secretary’s office directs county boards of elections to send notices to voters who fail to vote for a two-year period and to remove any such person who does not respond to the notice and doesn’t vote in the subsequent four years.

What this means, according to challengers, is that Ohio’s policy is the harshest in the nation in terms of purging its voter rolls.

“Ohio is the only state that does it based on not voting in a two-year period,” says Dale E. Ho, director of the American Civil Liberties Union’s Voting Rights Project, which along with the public policy group Demos, is representing Harmon and two Ohio nonprofit organizations. “It doesn’t make a lot of sense to assume that most registered voters move every two years.”

Ohio Attorney General Mike DeWine, a Republican, said in a court brief that the twin goals of the NVRA and its amendments were to increase voter registration and to reduce the number of ineligible registered voters.

While the “failure-to-vote” clause of the federal law bars programs that result in removal of a voter for nonvoting, other language in the law—referred to as the “confirmation procedure”—affirmatively requires states to use nonvoting in removal, according to the state’s brief.

“The [Supreme] Court can reconcile these provisions by holding that the failure to respond to a notice under the confirmation procedure breaks the prohibited link between nonvoting and removal under the failure-to-vote clause,” DeWine said in his brief.

This article was published in the January 2018 issue of the ABA Journal with the title "Urge to Purge: Court considers whether Ohio’s methods of cleaning up voter registration rolls go too far."