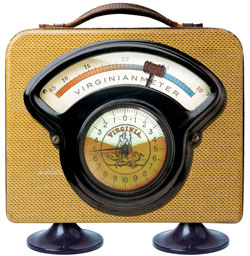 When Mark J. McBurney of Rhode Island claimed his former wife defaulted on child support payments, he asked the Virginia Division of Child Support Enforcement to file a petition on his behalf. He had lived in Virginia from 1987 to 2000, and had divorce and child support decrees there.

The DCSE told McBurney that his petition was filed in August 2006, but the agency did not actually file it until April 2007, depriving McBurney of almost nine months of child support payments, according to his petition for certiorari.

McBurney filed a request under the Virginia Freedom of Information Act in 2008 seeking “all emails, notes, files, memos, reports, policies [and] opinions” pertaining to him, his son and his ex-wife, as well as “all documents regarding his application for child support” and the handling of child support claims where one spouse resides in a foreign country. McBurney was living in Australia, the petition says.

McBurney claimed the DCSE possessed documents that would help him determine how his petition was processed and why the delay. But the DCSE turned down McBurney’s VFOIA request, saying, among other things, that McBurney was not a citizen of Virginia when he initiated it. While McBurney later acquired some information, he never got everything he requested in his earlier VFOIA requests.

Roger W. Hurlbert of California was in a similar situation. His business, Sage Information Services in Glen Ellen, north of San Francisco, provides real estate tax assessment records for clients. In 2008 a client asked Hurlbert to secure public records from Virginia’s Henrico County real estate assessment office, which Hurlbert did under the VFOIA. Again, the state denied his requests because he was not a citizen of Virginia.

This clause generally prohibits a state from discriminating against out-of-state residents with regard to their ability to earn a living. They also contend the law violates the dormant commerce clause, which prohibits state or local laws that unduly interfere with the free flow of commerce.

On Feb. 20, the U.S. Supreme Court will hear arguments in McBurney v. Young on whether a state may limit its public records requests only to its citizens or residents. In addition to Virginia, several other states—including Arkansas, New Hampshire and Tennessee—have similar provisions in their state open-records laws.

Constitutional law expert Erwin Chemerinsky says the case “should turn on whether there is any justification for discriminating against out-of-state citizens with regard to public records. But to get to that question the court has to find either that access to public records is a ‘privilege and immunity’ within Article IV or a restriction on commerce within the meaning of the dormant commerce clause. Each is a difficult proposition,” says Chemerinsky, dean of the University of California at Irvine School of Law.

With respect to privileges and immunities, Chemerinsky says, “almost all of the cases have involved earning a livelihood, though the court has said that fundamental rights are protected from discrimination. But does access to government records fit within this?”

One precedent may be Toomer v. Witsell, a 1948 case in which the Supreme Court invalidated a South Carolina law requiring in-state commercial fishermen to pay $25 for each shrimp boat, while out-of-state commercial fishermen had to pay $2,500 for each shrimp boat. “One harm of the Virginia law is that it gives a competitive advantage to people in the state over those out of state,” says Washington, D.C., attorney Deepak Gupta, who represents McBurney and Hurlbert and will argue the case.

“Mr. Hurlbert is in the business of requesting records,” Gupta says, “and this law makes it impossible for him—as someone in California—to do that in Virginia. There is a direct harm to him and people like him.”

The petitioners also challenge the law under the dormant commerce clause. “The Constitution prohibits discrimination against commerce across state lines, and the court has already ruled that public records are articles of commerce,” Gupta says.

But the Richmond, Va.-based 4th U.S. Circuit Court of Appeals, in a decision issued last February, rejected the privileges-and-immunities-clause challenge, pointing out that Virginia “does not regulate anyone’s qualifications or prerequisites to enter into or engage in any profession or trade within Virginia.”

The decision set up a circuit conflict with the Philadelphia-based 3rd Circuit, which ruled in 2006 that Delaware’s citizen-only provision violated the privileges and immunities clause. “No state is an island—at least in the figurative sense—and some events which take place in an individual state may be relevant to and have an impact upon policies of not only the national government but also of the states,” the court wrote in Lee v. Minner.

In its brief in opposition to the petitioners’ writ of certiorari, Virginia contended the petitioners’ argument would expand exponentially the reach of the privileges and immunities clause and threaten a host of state laws with residency requirements. “Recognition of such a ‘privilege’ would cast a cloud of uncertainty over the constitutionality of all state and local government services that are tied to state or local residency status,” the brief said.

The 4th Circuit also determined that the Virginia law does not discriminate against interstate commerce. “Any effect on commerce is incidental and unrelated to the actual language of VFOIA or its citizens-only provision,” the appeals court wrote. “Nothing in VFOIA burdens the flow of interstate commerce.”

“Discrimination under the dormant commerce clause means differential treatment of in-state and out-of-state economic interests that benefits the former and burdens the latter—facially or in effect,” says Marvin Ammori, a Washington, D.C.-based attorney who filed an amicus brief for the petitioners on behalf of the American Society of News Editors.

“This law does so facially,” he says, “making state records available only to Virginians. It also does so in effect. Organizations and individuals in Virginia engaged in interstate commerce have access to greater information in the state, with fewer burdens.”

Many other groups have supported the petitioners, including numerous media entities. “We don’t have a First Amendment claim, but you can see that the law causes First Amendment-like harm in restricting access,” Gupta adds.

Another facet of the Virginia law is that it has a provision exempting certain forms of traditional media. This means that out-of-state television and print media can obtain public records, but bloggers can’t. “Today, news comes in all forms, so this law discriminates between the old and new media, which is very problematic,” Gupta says.

Ammori hopes the court will address the media exemption in the case. “The Supreme Court, unlike the 4th Circuit, can take a broader look at the multiple statutes across the country that have citizen-only limitations and provide national certainty, and may address whether the media exemption in the Virginia law makes the law more targeted and less likely constitutional,” he says. “We believe that it does—partly because the Internet has changed the meaning of the media to include anyone with access to the computer and the desire to research and break a story.”

The state declined to comment in detail. “We have no comment other than we look forward to defending the state law in court and feel confident it will be upheld,” says Brian J. Gottstein, director of communications for the Virginia state attorney general’s office.

“My clients are thrilled that the court granted review,” Gupta says. “They really care about this issue, not just as it affects them but because they see what they are doing as something in the public interest.”