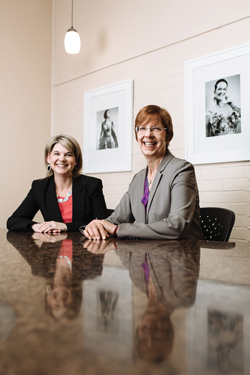 Coping with cancer is never easy, even with the best possible outcomes. That harsh reality will hit home with nearly 232,000 women in the United States who the American Cancer Society estimates will be diagnosed with various stages of breast cancer this year.

And not all the challenges cancer patients face are medical in nature. While coping with life-changing symptoms, treatments that sometimes are as debilitating as the disease itself and the anxieties of an uncertain future, cancer patients often must also deal with a slew of complex legal issues, including insurance, employment, bankruptcy, divorce and end-of-life decisions. And it’s not always easy to get adequate legal help to sort through these issues.

In an effort to help meet those needs, the ABA Breast Cancer Task Force has stepped up its campaign to encourage lawyers nationwide to become legal advocates for patients with breast cancer and to provide lawyers with educational resources and training opportunities, says Jennifer L. Rangel, a partner at Locke Lord Edwards in Austin, Texas, who chairs the Breast Cancer Initiatives Executive Committee, which coordinates the work of the task force.

Last year the task force began offering free webinars for lawyers that so far have covered topics including labor and employment, employee benefits, case management and insurance appeals, family law, bankruptcy, and estate planning, Rangel says. While continuing to work with bar associations and local chapters of Susan G. Komen (originally the Susan G. Komen Breast Cancer Foundation), the largest breast cancer organization in the U.S., the task force also has entered into a partnership with the Cancer Legal Resource Center based in Los Angeles. This is the task force’s first partnership with a national organization aimed at helping connect trained lawyers with cancer patients who need legal counsel. That same goal is behind the task force’s increasing collaborations with law schools and medical schools around the country, says Rangel.

These activities reflect a new level of involvement for the task force in efforts to respond to the legal needs of breast cancer patients. The task force’s roots date back to 1993, when the ABA Commission on Women in the Profession initiated its first program on breast cancer. The commission later implemented a new public education initiative designed to protect the legal rights of breast cancer patients. The Health Law Section assumed responsibility for the
project in 2008.

The need to assist breast cancer patients with their legal issues is as great as ever. According to the American Cancer Society, there will be more diagnoses of breast cancer in 2015 than any other form of the disease. Only lung cancer accounts for more cancer deaths among women.

Those numbers help explain the task force’s commitment to increasing awareness and training about breast cancer within the legal profession. “I’m very passionate about this,” Rangel says. “We want to make sure that others know who we are and that we’re here.”

In addition to the free webinars inaugurated in 2014, the task force offers breast cancer legal advocacy workshops in cities around the country and provides a legal advocacy guide, training toolkit, survivor material and other educational materials. Covering the rights of cancer patients on a wide variety of issues, the training helps lawyers in numerous practice areas prepare to offer their specific expertise to cancer patients, often for reduced fees or on a pro bono basis.

“What we are trying to do is raise awareness of the legal issues,” says Hilary Hughes Young, a member of Joy & Young in Austin and a vice-chair of the Breast Cancer Initiatives Executive Committee who also serves as secretary of the Health Law Section.

Young says that, as a breast cancer survivor herself, she understands the stresses and legal issues that cancer patients often confront. “What struck me as a patient is that I had insurance and my insurance was very good, but I could not imagine going through it without insurance,” she says. She also knows that she was fortunate in being able to continue working, even if it was at a slower pace than before her diagnosis, so she did not have to grapple with such employment issues as leave time, accommodations or job retention. “I was able to work it out with my [law] partner. I didn’t have to deal with a large firm or company,” she says.

THE IMPORTANCE OF PARTNERSHIPS

Task force representatives say the partnership with the Cancer Legal Resource Center is a significant step toward bringing lawyers and cancer patients together. A joint program of the Disability Rights Legal Center and Loyola Law School in Los Angeles, the Cancer Legal Resource Center provides information and education to the public through its national telephone assistance line. The center also conducts national education and outreach programs for community groups, employers and health care professionals. Lawyers who have taken the Breast Cancer Task Force’s legal advocacy training are encouraged to join the center’s legal panels, or any other cancer support/legal referral service set up by other organizations around the country, Rangel says.

Shawn Kravich, director of the legal resource center, welcomes the partnership. When inquiries come in, the center’s panels conduct a complete intake and then refer people “to a very local attorney who specializes in a legal area they need,” he says.

The Breast Cancer Task Force launched its series of free webinars last year with a program in April titled “Labor and Employment Issues Facing Cancer Patients.” Panelists discussed how cancer patients are protected under such laws as the Americans with Disabilities Act and the Family Medical Leave Act. Other webinars held during the year focused on family law and end-of-life decision-making; employee benefits and insurance coverage issues; an overview of medical treatments available to cancer patients; the Food and Drug Administration’s position on compassionate use for investigational drugs and the legal hurdles that cancer patients face in attempting to obtain them; and legal advocacy and social resources for cancer patients facing bankruptcy and financial issues.

The task force also has been seeking out law schools and medical schools to work with it to bring legal advocacy to breast cancer patients while, at the same time, educating health care providers about the legal issues their patients are facing. In October, the task force carried out a successful pilot project in conjunction with the University of Arkansas. First, a full-day breast cancer advocacy workshop was held at the William H. Bowen School of Law at the University of Arkansas at Little Rock. Several days later, a legal clinic was conducted at the university’s Winthrop P. Rockefeller Cancer Institute.

Several teams, each made up of a supervising lawyer and two students, saw a total of 17 breast cancer patients during the clinic, says Janet L. Pulliam, of counsel to Watts, Donovan & Tilley in Little Rock and a member of the Breast Cancer Initiatives Executive Committee who helped organize the event. “It was a very good experience for the supervising lawyers—the students loved it; the patients loved it; the physicians said they want to do it again,” she says. The program’s most important accomplishment, she adds, is that it brought patients “to the place where what we’re doing matters. It’s easy to get to the lawyers, but not as easy to get to the patients.”

This article originally appeared in March 2015 issue of the ABA Journal with this headline: “Fighting Back: A task force of the ABA Health Law Section is helping breast cancer patients deal with their legal concerns."