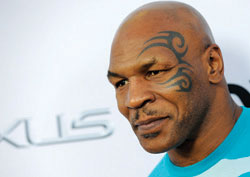 One day you’re feeling bold, or perhaps temporarily insane, and you walk into a tattoo parlor to get inked up. Congratulations, you’re the proud owner of the art now displayed on your skin and you can flaunt it however you wish. Not so fast.

A growing body of case law derived from a series of high-profile lawsuits suggests that ultimately it’s the tattoo artist—not the person who bears the tattoo—who owns the rights to that tattoo.

Copyright law protects original works of authorship fixed in any tangible medium of expression, including anything from paint on a canvas to sculpted clay to a piece of music.

And now it’s increasingly clear that the law also applies to ink on skin.

“Of course tattoos can be copyrighted,” said Judge Catherine D. Perry in a 2011 federal court hearing involving boxer Mike Tyson’s well-known tribal tattoo. “I don’t think there is any reasonable dispute about that.”

Tyson’s tattoo is widely credited with sparking the issue after his tattoo artist, S. Victor Whitmill, sued Warner Bros. for copyright infringement over the use of Tyson’s tattoo in the movie The Hangover: Part II. In the film, a character becomes intoxicated and wakes up with a replica of Tyson’s tattoo on his face.

Warner Bros. had argued in part that the depiction of the tattoo was simply parody and protected as fair use. But the judge in the Tyson tattoo case disagreed. “This use of the tattoo did not comment on the artist’s work or have any critical bearing on the original composition,” she said. “There was no change to this tattoo or any parody of the tattoo itself.”

The case ultimately settled out of court.

Since then there have been several copyright disputes involving tattoos. In 2012, a tattoo artist who inked mixed-martial-arts fighter Carlos Condit sued video game maker THQ Inc. for depicting Condit’s lion tattoo on a game character resembling the fighter. Also, the National Football League Players Association has warned players to seek copyright waivers from their tattoo artists to guard against lawsuits in the event images of the tattoos are used—intentionally or not—in advertisements, video games and other media.

Lawyers foresee copyright waivers becoming a fixture in tattoo parlors. “I don’t doubt that in many larger tattoo parlors it will become standard that some type of document is presented to those who are going to have tattoos put on them stating that those tattoos have been created by the tattoo artist or the parlor,” says entertainment lawyer Jerry Glover of Leavens, Strand, Glover & Adler in Chicago.

Some have worried that all this litigation could result in people having to sign over the rights to their body anytime they are tattooed. But so far the case law has suggested that simply getting a tattoo doesn’t mean the body and its art has to be shrouded whenever a camera is near. Instead, it’s the tattoo design that cannot be misappropriated.

“When you tattoo somebody, what you are giving them is an implied license to live their life,” says professor Yvette Joy Liebesman of Saint Louis University School of Law. “They don’t have to be concerned about the way the tattoo is displayed on themselves. The issue is copying that tattoo on somebody else.”

For the most part, a regular Joe who gets a tattoo shouldn’t confront this issue since most of the cases deal with tattoos on famous people. So breathe easy—most likely that Mickey Mouse tattoo on your ankle isn’t drawing much attention from anybody, other than, perhaps, your mother.

This article originally appeared in the January 2014 issue of the ABA Journal with this headline: “Ink Inc.: As tattoos become big business, tattoo artists are asserting their copyright claims.”