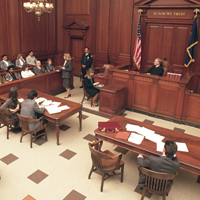 Paralegals carrying laptops equipped with 3G and wireless cellphone lines accompany Los Angeles County plaintiffs lawyer Paul Kiesel to court when it’s time to pick a jury. Providing that they can pick up a signal, the workers do real-time social media searches while the clerk reads the names of jury panel members.

In Los Angeles County, how jury panel members’ names are released is left to the judge’s discretion. On big cases, Kiesel says, the court might release names the evening before selection begins. But more commonly, counsel finds out who is on the panel as the members walk in.

“Last month I had 50 jurors, and as the court clerk read out the names, I had two people in the courtroom and a third person back at the office, with all three of them doing research,” says Kiesel, a partner with Kiesel, Boucher & Larson. Junior lawyers also assisted, and Kiesel estimates the social media research for that case cost less than $5,000.

The case was over a construction accident involving a supplier and installer who fell four stories. The plaintiff demanded $1 million and the defense countered with an offer of $15,000.

One prospective juror, a 30-something lawyer who defended workers’ compensation cases, gave Kiesel a good feeling. His client’s employer wasn’t a defendant, Kiesel reasoned, and the man would likely have a good understanding of California law.

Bringing social media into jury selection “messes with you a little bit,” Kiesel says, “because it’s providing information that my gut instinct may not be clearly attuned to who I’m talking with.”

Not surprisingly, he kicked out the defense lawyer. The jury, which found Kiesel’s client partially at fault, awarded the man $500,000.

For the most part, state courts allow lawyers to bring laptops into court rooms, but Googling the jury panel isn’t what they have in mind, says Paula Hannaford-Agor. She directs the Center for Jury Studies at the National Center for State Courts.

“It’s hard to make a broad generalization, but it’s fair to say the bench is more protective of juror privacy,” she says, adding that online snooping “tends to creep jurors out when they’re aware of it.”

Kiesel says no judge has banned him from using the Internet in jury selection. That sort of mandate, he adds, would violate the First Amend? ment.

Hannaford-Agor allows that the searches would be hard to police.

“This is a really fluid area right now, and no one in the legal community is adequately keeping up with the technology or some of the implications,” she says. “So if you call me again in six months, I might have a different answer.”