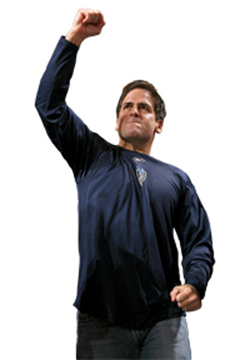 U.S. Securities and Exchange Commission lawyer Jeffrey B. Norris moved to Texas in the early ’90s and became a passionate fan of the NBA’s Dallas Mavericks. The team’s fortunes, he said, practically controlled his emotional state.

But that all changed in the spring of 2007, when Norris, a trial counsel in the SEC’s Fort Worth office, learned that Mavericks owner Mark Cuban, who also owns a stake in a movie distribution company, was considering distributing Loose Change. The film suggested that the Bush administration orchestrated the 9/11 terrorist attacks as a pretext for going to war with Iraq.

“It’s a very sad day for me,” Norris wrote in an e-mail message to Cuban from his SEC account on March 28. He informed Cuban that, because of his ties to the movie, Norris would no longer be following the Mav­ericks and also would hope for their early elimination from the 2007 playoffs.

“Next time one of [my children] asks me, ‘Daddy, do we like the Maver­icks?’ I will say, ‘No, honey, we don’t. We hate the Mavericks because the man who owns the team helps very bad people who hate America and hate President Bush. We love the Lakers,’ ” Norris wrote.

It all came to a head when the Golden State Warriors unexpectedly beat the Mavs in the first round of the 2007 playoffs, and Norris wrote a parody of Loose Change in which he suggested that Cuban had purposely orchestrated the team’s defeat for financial reasons. Norris e-mailed Cuban his parody, to which Cuban replied: “And you work for the SEC? That’s scary. Should I forward all your e-mails to [SEC Chairman Christopher] Cox?”

“Previously, I thought you were merely foolish and naive. Now, however, I see that you are also a hypocrite,” Norris responded, offering to copy Cox on the e-mail in light of Cuban’s “threat.”

“Not a threat,” Cuban replied. “Just thought he would be curious to know the type of people he has working for him.”

“I have no apologies to make,” Norris fired back, saying he supports his country and his president, and works hard to protect investors. “Oh, and I think par­odies can teach important lessons to people who other­wise find it difficult to listen.”

“Yeah, sending an unsolicited e-mail to me, basical­ly accusing me of being a traitor and lacking in patriot­ism, from your SEC e-mail account and during working hours is exactly how taxpayer dollars should be spent,” Cuban responded.

The whole matter might have ended there but for the fact that the SEC was apparently investigating Cuban for possible insider trading involving an Internet search engine company. When the agency filed a civil enforcement action against him last fall, Cuban’s brother, Brian, posted the entire e-mail exchange on his blog, The Cuban Revolution.

Cuban denied the allegation and a Dallas federal judge dismissed the charges in mid-July, but not before Cuban filed his own suit against the SEC, alleging it with­­held documents he’d requested under the Freedom of Infor­ma­tion Act relating to the agency’s investigation of him. The SEC’s inspector general also is apparently investigating a misconduct complaint filed by Cuban’s lawyers against Norris and other staff members, according to his semi­annual report to Congress.

Cuban’s lawyers could not be reached for comment. The usually talkative Cuban didn’t respond to an e-mail request for com­ment. Norris, who is on temporary leave from his job, didn’t respond to a message left on his voice mail. An SEC spokes­­man says that Norris, who has been disciplined for the inappropri­ate e-mails, “played no role in” and “did not know” about the insider trading inves­tigation of Cuban.