That's a Good One: Effective Trial Lawyers Know How to Tell a Good Story 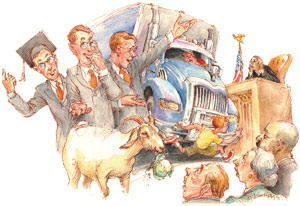 “A great story is like a well-crafted joke—deliciously brief, immediately memorable, eminently repeatable and virtually impossible to dismiss.” —Kenneth Albers, actor and director

Whether written or oral, stories are essential to virtually every part of litigation—from opening statements to direct and cross-examinations to final arguments, written briefs and the give-and-take between lawyers and judges in the middle of an appellate argument.

Which means lawyers who want to become effective communicators must understand that stories are at the heart of how people think, learn, exchange ideas and struggle to understand the world around them.

Good stories are not just snapshots of isolated events. Stories deal with the interrelationships that show how people think and how the world works. Stories are at the very heart of what the law is all about.

So it was only natural that at some point our local bar association’s monthly program would be about stories—and that Angus and Judge Horatio Standwell would plan the event and lead the discussion.

Right at 7:30 last Wednesday evening, Judge Standwell opened the program with this question: “What do we all have to continually unlearn from our law school training to be able to effectively try real cases

“After all,” he said, “almost everything the law deals with—just as almost everything medicine deals with—is both important and inherently interesting. The problem is that both lawyers and doctors have been carefully taught to speak and write in tongues, to hide our ideas so that only the elite can share them.”

“First,” said Angus, “we had to become bilingual. We had to learn enough legalese to begin with so we could read and understand old appellate decisions in law school casebooks.”

“But the trouble is,” said Judge Standwell, “when we were in law school, we thought learning to talk like lawyers made us special.

“And it does. It makes us specially annoying. The real challenge is to learn how to talk about difficult legal topics and problems using ordinary, everyday English so that any juror snatched off the streets to serve on a case can understand what we’re talking about.”

“But how can you do that ” said Sandra Garcia, who was sitting in the front row, religiously taking notes.

“First,” said Angus, “by reading your depositions out loud and crossing out every word you used that wouldn’t be understood by the average 13-year-old.”

“Amen to that,” said Judge Standwell. “Next, the key for lawyers to become effective communicators is to appreciate the importance of stories to how people learn and understand.”

“But I’m not a storyteller,” said Sandy.

“Sure you are,” said Angus. “You’ve been telling stories, listening to stories and understanding stories since you were very young—years before you were even able to read.

“You don’t have to be a spellbinder,” he said, “but you do have to know what you’re talking about. And you do have to learn how to put the story together so it makes sense to the people you’re talking to. If that includes putting a simple outline on a blackboard or flip chart, so much the better.”

“One of the most important things you need to learn,” said Judge Standwell, “is how to cut your case down to size, whether you’re representing the plaintiff or the defendant.

“You’re not in law school anymore. You get no bonus points for identifying and arguing every possible complaint or defense no matter how remotely relevant. No one gives you kudos for introducing the most demonstrative evidence or calling every possible witness, especially if they have nothing to add to what three other witnesses have already testified to.

“In other words, ‘Go with the best; to hell with the rest’ is not a bad approach to winnowing any case down to size.”

“Absolutely right,” said Angus. “One way to remember this rule is to think about an example the late Irving Younger used in his lectures at the National Institute for Trial Advocacy.

“The plaintiff, a farmer who grew a patch of cabbages behind his house, had a neighbor who kept a goat in his backyard. One day the goat broke loose, got into the cabbage patch, and ate lots of cabbages while digging up and ruining the rest of the patch. The farmer sued the owner of the goat for his lost cabbages. Here is how the ‘raise-every-issue defense lawyer’ responded in his opening statement:

“ ‘If you had any cabbages, they were not eaten.

“ ‘If your cabbages were eaten, it was not by a goat.

“ ‘If your cabbages were eaten by a goat, it wasn’t my goat.

NO TIME FOR TALL TALES

Then Judge Standwell said, “You hear all kinds of lawyers making all kinds of opening statements when you’re sitting on the bench. Over the years I’ve made a list of what I think are some important rules to follow when you stand up to tell the judge and jury what the case is all about:

“First, tell the story. Virtually every case has a story for each side. It’s the simple picture that tells what the case is all about. You need to be able to tell someone who knows nothing about the dispute what your case is about in 30 seconds.

“Two, you’re not in law school anymore. You can’t keep throwing issues into the case because they are theoretical legal possibilities. You have to cut through all kinds of legal and factual clutter to decide what really counts.

“Three, don’t keep every possible issue in the case. Losing issues are worse than clutter. Just because you have some winners doesn’t mean keeping the losers won’t sink your ship.

“Four, law school is not real life. You get no extra credit in the real world for arguing every possible issue.

“Five, never exaggerate. It creates a burden of proof you can’t possibly meet.

“Seven, be plausible. If you’re representing the defendant trucking company in a child run-down case, don’t fight too hard to slow down your client’s truck. The jury will never believe it was only going 10 miles per hour in a 35 mph zone. Instead, concentrate on speeding up the kid, who was in between two parked cars when he suddenly darted across the street in the middle of the block.

“Eight, never take inconsistent positions. The real problem with putting your eggs in more than one basket is you send the message that you don’t trust the other baskets.

• ‘This is what we lawyers call an opening statement.’

• ‘Nothing I say is evidence.’ Technically true, but why say it? In effect, you’re shooting yourself in the foot. Just tell the story of the case.

• ‘This opening statement is like the picture on the cover of a jigsaw puzzle.’ Well, maybe, but the underlying message is that this case is so complex they’ll never be able to figure it out, much less put it all together.

“And finally,” said Judge Standwell, “the most powerful thing you can do in your opening statement is tell the story of the case so that it arouses the judge and jury’s sense of injustice. When you are for the plaintiff, it sends the message that ‘Here is a wrong that you need to set right.’

“And when you represent the defendant, it says, ‘It would be terribly unfair to make this woman pay for something she didn’t do.’ ”