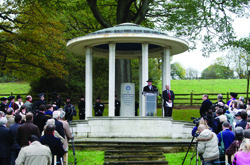 At Runnymede in November 2010, Justice Secretary Kenneth Clarke launched five years of celebrations leading up to the 800th anniversary of the signing of the Magna Carta. AP Images/Steve Parsons

The ABA has a long-standing affinity for Runnymede, the idyllic meadow along the banks of the Thames River west of London, where legal history was made nearly eight centuries ago.

On June 15, 1215, King John of England met with his barons in that meadow to resolve a power struggle. Their agreement was set forth in the Magna Carta. Just the fact that King John agreed to sign a document affirming the principle that no one, not even a monarch, is above the law was historic.

But the Magna Carta contained words of even deeper importance to the long-term evolution of the rule of law. Most of the document addressed practical matters relating to the dispute between King John and his barons, but mixed in with those provisions were statements describing what were understood to be the fundamental rights of Englishmen. Those statements express principles that provide the basis for individual rights under the law in the United States as well as in Britain.

“The signing of Magna Carta is an important civics lesson to teach and remind all Americans about the rule of law,” says Stephen N. Zack, an ABA past president who chairs the Magna Carta 2015 Committee, which is developing the association’s plans to commemorate the 800th anniversary. A series of events will be held in the United States and the United Kingdom, including a ceremony at Runnymede, says Zack, who is administrative partner in the Miami office of Boies, Schiller & Flexner.

GIVING RUNNYMEDE ITS DUE

Until recent decades, Runnymede received little attention as a place where history was made. Well into the 20th century, a traveler meandering along the country highway that runs along the Thames could pass Runnymede without a clue of what had occurred there. For a time, there was talk of turning the meadow into a housing development.

That changed in the mid-1950s, when the late Charles S. Rhyne, who served as ABA president in 1957-58, spearheaded an effort to build a monument at Runnymede. The association raised funds for the project by soliciting members for donations of up to $10 each.

The dedication ceremony held July 28, 1957, in conjunction with the London sessions of that year’s ABA Annual Meeting was attended by some 5,000 people, including Queen Elizabeth II, and broadcast over television and radio.

But despite all the pomp and circumstance, “do you know what I remember most?” said Rhyne in a 1999 interview with the ABA Journal. “Prince Philip riding up to the ceremony on his horse from some polo match.”

After dedicating the monument in 1957, the ABA sponsored commemorative ceremonies at Runnymede when it held annual meeting sessions in London in 1971, 1985 and 2000. The memorial, however, “is badly in need of repair,” Zack notes.

The commemorative events in 2015 will not be held as part of that year’s annual meeting in Chicago, says Zack. “There are no plans for a full-fledged London session of the annual meeting” in light of economic considerations and feedback from members indicating that they prefer the association’s major meetings be held in the United States, Zack told the Journal. Instead, the committee will seek funding primarily from voluntary sources. The committee also is looking at possible partnerships with other groups, including the Law Library of Congress and British legal associations.

In the United States, the committee is recommending that the legacy and lessons of the Magna Carta be the theme of Law Day 2015 (also started by Rhyne). William C. Hubbard, a partner at Nelson Mullins Riley & Scarborough in Columbia, S.C., who is running unopposed to serve a one-year term as ABA president in 2014-15, has expressed his support for that proposal.

And Queen Elizabeth would certainly be welcome to attend another ABA ceremony at Runnymede, Zack says. “Any royal support we could get for this would add to the excitement,” he says.