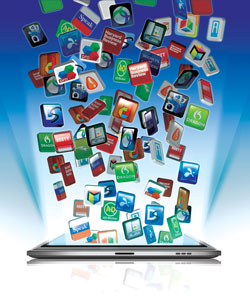 While the format has its skeptics, mobile apps are revolutionizing the way law is being practiced in the U.S.—a trend that will only intensify this year, according to ardent supporters.

Indeed, the latest smartphone or must-have tablet is no longer a technological fashion statement; it’s a critical, competitive tool that many attorneys simply refuse to live without. “Smartphones and tablets are not just shiny objects to catch up on the news or update Facebook,” says Chad E. Burton, whose virtual law firm serves Ohio and North Carolina. They “can play a key role in producing work product for clients and managing a law firm.”

“I can run our entire practice off my iPad,” says Burton, whose headquarters is in Dayton, Ohio. “One example: You could Skype in a client or another lawyer to a deposition or hearing to let them observe what is going on—which naturally saves time and money.”

Jeff Richardson, a New Orleans lawyer and author of the blog iPhone JD, would not think of hitting the legal trenches without GoodReader, which he calls “the most useful app on my iPad.” It allows tablet, iPod Touch and iPhone users to read virtually any document—PDFs, books, maps, even pictures and movies.

And Jeff Taylor, an Oklahoma City lawyer and author of the Droid Lawyer blog, is similarly smitten with Fastcase, a legal research app that enables an attorney to pull up cases, statutes, court rules and other documents virtually anywhere on the planet using any Android device. 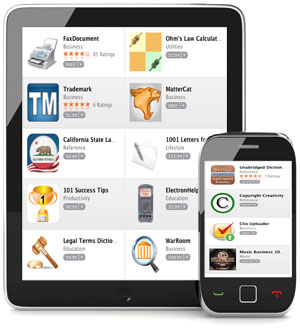 App fanatics cite all sorts of reasons why they believe mobile is the future of law computing, but the ability of apps to technologically arm an attorney on the go continues to be one of the format’s greatest draws. As Brett Burney of Burney Consultants in Beachwood, Ohio, says, “The fact that you can do so much work today on a small iPad that used to require a heavy, bulky laptop a few years ago is a tremendous leap forward in productivity.”

Apps also have a reputation for appealing to an extremely specific need and no more—a welcome change for attorneys with little time for learning software overgrown with features they’ll never need.

“My 2-year-old knows how to navigate back and forth between apps,” Burton says, “so lawyers should be able to do the same.”

Burney’s firm advises corporate executives and legal professionals on e-discovery, offers litigation support, and provides guidance on choosing legal software. He adds, “When you’re in an app, you’re not stressed out by a bloated number of features. The interface is usually intuitive with only the buttons and features that you need to complete the task in front of you.”

Plus, the “instant-on” capability of mo-bile devices makes the alternative—waiting for a PC to boot up for what seems like an eternity—seem hopelessly antiquated. With an app, you flip the switch on a phone, tablet or similar device and you’re working.

Many apps also offer attorneys fingertip access to all the firm’s data that’s stored in the cloud, no matter where they happen to be. “If the firm or lawyer uses cloud platforms for practice management and document management,” Burton says, “apps allow instant access to a client’s information whether the lawyer is in a conference room at the firm, at the client’s office or traveling.”

“I no longer need to worry about wasting time while waiting for a doctor’s appointment or sitting idly on a train,” says Jennifer Ellis, vice president of Freedman Consulting Inc. in Lansdale, Pa. “My smartphone apps enable me to catch up on and act in response to emails, communicate with social media networks and perform work for my clients at any time.”

With a smartphone or tablet ever at the ready, the perennial problem of tracking billable hours also becomes eminently manageable. “Trying to remember time later invariably results in lost billable hours,” says Ellis. “Keeping track of time with an app that is always in the attorney’s pocket is a great way to help with this problem.”

With the installed base of mobile devices now pervasive throughout all strata of society, apps offer attorneys the opportunity to communicate with clients on a much more intimate level, if they so choose. With “lawyers carrying their phones with them all the time,” Burney says, “I believe that [videoconferencing programs] Skype and Facetime will become more prevalent in communication.” 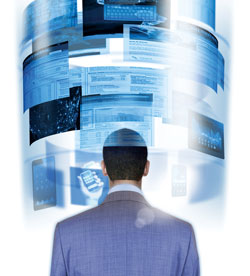 Granted, there are those who are less than enamored when it comes to computing’s latest wrinkle.

What’s more, he says, “for creating content, I find tablets to be awful. Microsoft Office isn’t installed on my iPad, nor can it be, and almost none of the programs I use daily will run on an iPad. Of course I could try to find apps that do some of the same things. But to me, it’s just a big waste of time. I already have the programs on my laptop.

“So I view tablets as an accessory. I can’t run my practice or business on one. But they’re fun to use, easy to take with me and pretty nice for reading. If ultrabooks live up to their potential of being the best of a PC and a tablet in one package, I’ll give my iPad to my kids, who will use it for what it seems designed for in the first place—playing games.”

Fortunately for app makers, there are hordes of attorneys who do not share Henley’s view. Consequently, app fans can look forward to another torrent of fresh product—both from software vendors and firms looking to stay technologically current—during the coming year.

“Tablet penetration in the legal field is on a very steep and rapid adoption curve, and that creates the pull for more apps,” says Paul Mansfield, president of his own legal technology consulting firm in Corrales, N.M. “So we’ll see all of the legal market vendors vying for position by tying mobile devices to their core systems, either directly or via a cloud interface.”

Further intensifying the availability of apps is the anticipated emergence of ultraportable laptops as a serious alternative to tablets and smartphones, Mansfield adds. These devices will appeal to lawyers who are looking for something in a larger format that is still thin and light and offers instant-on capability by using a solid state drive.

Also, Microsoft’s rollout of Windows 8, a touch-screen operating system designed to run on all hardware formats, will only create more demand for apps. “Add Windows 8 to the mix,” Mansfield says, “and the user interface becomes totally transparent across the spectrum of devices: desktop, laptop, tablet and smartphone all look alike. That’s all good.”

The only major caveat amid all the app fervor is security. Over the years, law firms and corporate clients have put all sorts of safeguards in place regarding the data they’re entrusted to guard on mainframes, desktops and, more recently, laptops. But the seemingly overnight proliferation of mobile devices across the legal profession, sometimes without the development of policies for protecting client data, has put too many attorneys at risk.

“Like anything else that puts client data outside the safety of the office, we have to be sure proper security precautions are in place,” Mansfield says. “Attorneys who purchase these devices and ‘go rogue’ with them—not hooking them into the firm’s network and security—are taking unnecessary risks. It’s better to have total buy-in from the firm.”

He adds: “Be careful out there. It’s a jungle.”

“There are simple security measures that lawyers need to take with their mobile devices,” she says. “They must understand the risks of carrying around client data on your device, and all devices should have strong passwords and remote-wipe capabilities in the event the device is lost or stolen.”

Law firms with ambitions of releasing their own apps in the near future will first need to decide whether they want a single version to run on all devices or take a more customized approach.

Unwittingly, the decision will force them to pick sides in a debate raging across the Web—whether to program in HTML5, a one-size-fits-all solution, or design multiple versions of the app for each of mobile’s native operating systems: Android, Apple iOS, Microsoft Windows Mobile OS, BlackBerry and the like.

It’s a conundrum that has befuddled some of the digerati’s savviest, including Mark Zuckerberg, CEO of Facebook. “I think that the biggest mistake we made as a company is betting too much on HTML5 as opposed to native—although long term, I’m really excited about [HTML5],” Zuckerberg told showgoers at TechCrunch Disrupt this past September. An early adopter of the language, Zuckerberg backtracked after watching HTML5 apps designed for Facebook run at a crawl. His firm is now in the process of releasing rewritten versions designed to run on specific mobile operating systems.

Like many techies, Zuckerberg was lured in by the seemingly elegant simplicity of HTML5, which enables developers to write an application for the Web that can be run on any mobile device having a browser.

With HTML5 there are also no royalty fees to pay because it is not proprietary; anyone can design for free in the language. And there is also no 30 percent distribution fee to pay the Apple App Store, since HTML5 apps can be freely shared across the Web.

There are several heavyweight firms getting behind the HTML5 standard, including the software company SAP, which announced last spring it was partnering with Adobe and a number of significant software partners to champion apps in HTML5.

“SAP, customers, partners and the entire ecosystem now have a tremendous opportunity to rapidly produce millions of high-quality apps using the tool of their choice,” says Sanjay Poonen, SAP president of global solutions.

But for some, HTML5 has not completely lived up to its press. Its apps sometimes run slower than the same apps designed for specific, mobile operating systems. In addition, mobile browsers sometimes lag behind the latest advances in HTML5, causing cutting-edge apps to run less efficiently than envisioned.

Still, the alternative—designing different versions of your law firm app to run on different operating systems—can seem equally unappealing, especially if your law firm has limited IT funds.

If you’re caught between that rock and a hard place, you may want to try a third approach. Software firms like ViziApps, for example, are offering app-authoring software that claims to combine HTML5 and native app authoring in one. To users, hybrid apps are like native apps in that they can take advantage of device features, such as the camera and GPS, according to George Adams, ViziApps CEO. And the apps can be distributed through an app market like the Apple App Store or Google Play.

As a result, he says, hybrid apps provide the flexibility for mobile business apps to access Web content and integrate advanced functionality, such as that needed for mobile games and complex app logic.

Joe Dysart is a freelance writer based in Manhattan.