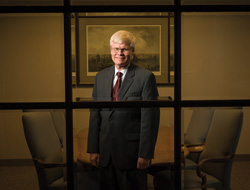 For more than 34 years, Horstman has worked in Houston-based Marathon Oil’s corporate legal department, where he now oversees all international legal operations. Until five years ago, he didn’t give a second thought about doing pro bono legal work.

“I always felt I did enough law at work,” he says. “I focused my public service and community work on nonlegal matters.”

In 2007, Marathon’s then-general counsel instituted a formal pro bono program for the company’s lawyers. As part of the new effort, Catholic Charities made a presentation highlighting the legal needs of immigrant children in the United States.

Horstman agreed to tackle a single case. It changed his perception of himself and his practice. “I realized that I am one of the few who can do this because of my expertise as a lawyer,” he says.

“I regret that I didn’t start doing pro bono earlier,” he says.

Horstman also considers it smart for lawyers in corporate legal departments to use their positions to persuade their outside counsel to get more involved with pro bono. He has partnered with numerous law firms on his pro bono projects.

Horstman’s cases are heartbreakers. He has represented kids as young as 3. They are from El Salvador, Guatemala, Honduras and Mexico. Most have been horribly abused and neglected. They are housed in overcrowded shelters with no family or friends while they face removal proceedings.

He recently represented a 12-year-old Salvadoran girl who was abandoned by her parents when she was a baby. She was repeatedly raped at age 6. Finally, a family member paid a smuggler to help her flee to the United States. The girl was caught and detained in Houston. Immigration officials were planning to send her back.

“If these kids are sent back, they will likely be killed,” says Horstman, who now performs about 230 hours of pro bono a year. “The kids don’t have a chance without a lawyer. These cases are very complex with many hurdles to clear. A lot of these cases are girls running from drug cartels, and their punishment for fleeing is certain death.”

The cases can take a year or more to obtain legal status and establish permanent residency for the kids. Of the 10 cases Horstman has handled, he has won nine and has one pending.

“These kids are so truthful and considerate, and they are just so happy and grateful that lawyers are there to help them.”