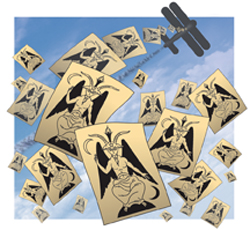 In a progressive society, people are tolerant of myriad viewpoints and lifestyles. Same-sex marriage? Most would agree that two people loving one another is hardly a scourge on our existence. Legal marijuana? It might not be everyone’s cup of tea (figuratively or otherwise), but it’s not been shown to be any worse than alcohol. Satanism? Whoa, now, just hold on a minute.

Yes, it’s no surprise that last one is a hard sell. But just as the other two examples have come to be accepted, if not always embraced, recent occurrences indicate that Satanism is horning its way into the national consciousness as well, even though some are doing a slow burn over it.

According to the website of the Church of Satan, the movement espouses pride, liberty, individualism and carnality—not exactly the lurid, violent, ghastly stuff that is generally depicted in books and movies. Members put themselves at the center of their own universe, as their own highest value. And the FAQ on the site of another group, the Satanic Temple, states that “beliefs should conform to our best scientific understanding of the world. We should take care never to distort scientific facts to fit our beliefs.”

Both organizations reject nonhuman deities and raise challenges to religious displays, especially those appearing on government property. Nativity scenes at Christmastime, for instance.

In December 2013, the Satanic Temple wanted to put up a holiday diorama at the Florida State Capitol.

It carried a greeting from the temple and depicted an angel falling into hell. It was rejected as “grossly offensive” by the state’s Department of Management Services, according to the Tampa Tribune.

But last December, after invoking the U.S. Supreme Court’s Hobby Lobby decision allowing religious beliefs to trump a portion of the Affordable Care Act, the temple threatened legal action—and the diorama was allowed to be shown for seven days, along with various other nontraditional displays on the same time schedule. When the display was intentionally damaged, Satanic Temple spokesman Lucien Greaves told news media the organization would leave it that way “as a testament to the intolerance of some people.”

One city—Lake Worth—said it would allow him to give an invocation, but then decided to do away with the practice altogether. Stevens stated on his website that he hoped other municipalities would abolish the practice as well.

And, lastly, once again in Florida—apparently ground zero for Satanic flare-ups—the Orange County school district allowed Christian-oriented as well as atheistic materials to be distributed in its schools. In September, the Satanic Temple submitted some of its materials for inclusion. The school board has reportedly moved to change its policy so that no religious materials will be allowed in the schools.

It’s a hell of a thing to consider new viewpoints, and many people have a devil of a time doing so. But at least these battles were waged with words, not weapons. Nous sommes Charlie.

This article originally appeared in the March 2015 issue of the ABA Journal with this headline: “Beelzebub Beckons: The devil is in the details when the fallen angel demands his due."