The establishment clause is still a contentious battle among the justices 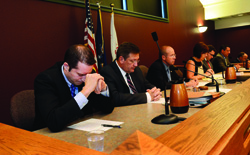 Town board members in Greece, N.Y., begin each meeting with a prayer. The practice will be reviewed by the high court in terms of whether it violates the establishment clause. Photo by Heather Ainsworth/Bloomberg via Getty Images.

Contemporary author Stephen Mansfield called them the “10 tortured words”: “Congress shall make no law respecting an establishment of religion.”

The establishment clause arguably has generated more controversy than any other phrase in the First Amendment—or perhaps even in the rest of the Bill of Rights. As a result, the U.S. Supreme Court’s church-state jurisprudence is labyrinthine and complex. In 2011, Justice Clarence Thomas bluntly declared establishment clause law to be “in shambles.” Designed to provide a degree of separation between church and state, the clause has generated a litany of 5-4 or 6-3 Supreme Court decisions since the late 1940s.

Nevertheless, the Supreme Court once again will wade into the rocky waters of the establishment clause Nov. 6 when it hears oral arguments in Town of Greece v. Galloway. The court will determine whether a New York town’s practice of having prayer before town board meetings violates the establishment clause. For years the town of Greece, near Rochester, began town meetings with a moment of silence. But in 1999, the town began offering clergy-led prayer. The clergy were almost always of the Christian faith.

Two town residents, Susan Galloway and Linda Stephens, complained to town officials about the practice in September 2007. The town continued the prayer practice but expanded the range of prayer givers to include a Wiccan priestess, a chairman of the local Baha’i congregation and a lay Jewish man. But the vast majority of the prayers were Christian.

Galloway and Stephens sued in federal district court in February 2008, contending the prayer practice affiliated the town with Christianity and promoted sectarian beliefs. A federal district court dismissed the plaintiffs’ claims in August 2010, writing that “the town’s willingness to rotate the prayer opportunity amongst various denominations, each with their own particular beliefs, belies any attempt to proselytize or advance any one, or to disparage any other, faith or belief.”

However, in May 2012 a three-judge panel of the 2nd U.S. Circuit Court of Appeals at New York City unanimously reversed the decision. “We conclude, on the record before us, that the town’s practice must be viewed as an endorsement of a particular religious viewpoint,” wrote Appellate Judge Guido Calabresi for the panel. “We conclude that an objective, reasonable observer would believe that the town’s prayer practice had the effect of affiliating the town with Christianity.”

NEW GROUND FOR SOME

Town of Greece represents the first opportunity for several justices to address an establishment clause case. Neither Chief Justice John G. Roberts Jr. nor Justices Elena Kagan, Sonia Sotomayor or Samuel A. Alito Jr. were on the court for the last major establishment clause cases, Van Orden v. Perry and McCreary County v. ACLU. Those cases, on displaying the Ten Commandments on municipal grounds, were decided in 2005.

“It is hard to anticipate the breakdown of the court’s ruling since many members of the current court have not had a chance to opine on an establishment clause case involving something like legislative prayer,” says Luke Goodrich, deputy general counsel for the conservative Becket Fund for Religious Liberty.

The case relies on the Supreme Court’s 1983 decision in Marsh v. Chambers, in which the high court upheld the Nebraska legislature’s policy of beginning legislative sessions with chaplain-led prayer. “The opening of sessions of legislative and other deliberative public bodies with prayer is deeply embedded in the history and tradition of this country,” wrote Chief Justice Warren Burger for the majority.

“This is a very different factual situation than Marsh, where it was one minister delivering nonsectarian prayers,” says First Amendment expert Erwin Chemerinsky, dean of the University of California at Irvine School of Law. “Here, the town invited ministers who routinely gave prayers that were explicitly Christian. Marsh does not permit this; I always read Marsh as permitting nonsectarian prayers. That is not this case. Virtually every prayer had been delivered by a Christian minister, and the prayers usually had an explicit Christian content.”

Jeremy Leaming, director of communications at the progressive American Constitution Society, agrees with Chemerinsky’s assessment. “The town of Greece’s policy on prayer at its public meetings was carried out in a way that clearly was all about Christian prayer,” he says. “Judge Calabresi noted there was nothing neutral about the town officials’ preference for invocations—they were all practically Christian.”

Instead of Marsh, respondents Galloway and Stephens would prefer to use a different establishment clause test, such as the endorsement test, which asks whether a reasonable observer familiar with the history of the town board’s prayer practice would view the town as impermissibly endorsing Christianity.

However, other experts view the case much differently. “The 2nd Circuit in this case seemed clearly hostile to the idea of legislative prayer,” says Goodrich of the Becket Fund, which filed an amicus brief in support of the town. “The court’s decision did not provide clear guidance for towns and cities. If the Supreme Court adopted a rationale like the 2nd Circuit, it would be very damaging to religious freedom.”

Another key question is what the word affiliate means in Calabresi’s statement that prayer practice affiliates the town with Christianity, says John W. Whitehead, founder and president of the Rutherford Institute, a Charlottesville, Va.-based group that provides legal services in the defense of religious and civil liberties and that also filed an amicus brief in support of the town. “I agree that the government should not promote a particular religion, but the facts in this case do not indicate that occurred.”

He adds, “I think there is a good chance that the U.S. Supreme Court will rule in favor of the town in this case unless the justices just reverse precedent. If the court follows Marsh, the town’s practice will be upheld.”

The court could also speak more broadly and shape its establishment clause jurisprudence quite differently.

“I think that there are five votes on the current court to change the law of the establishment clause,” Chemerinsky says. “Town of Greece and its amici are using this case as the vehicle for urging the court to do so. I am very concerned that there are five votes to shift to the ‘coercion test’—that the government violates the establishment clause only if it coerces religious participation.”

Goodrich hopes the court will use the case as a vehicle to expand the role of history and tradition in establishment clause cases, rather than use it as a test that asks whether a reasonable observer would find that a town endorsed or affiliated itself with a particular religion. At the founding, he says, establishment of religion consisted of whether the government would financially support the church, control its doctrine and personnel, coerce religious beliefs and practices, and assign its important civil functions.

“Because legislative prayer does not fall within any of these categories, it is not an establishment of religion,” Goodrich says. “By basing its decision on the historical meaning of the establishment clause, rather than the endorsement test, the Supreme Court would place its church-state jurisprudence on much firmer legal grounds, and would give badly needed guidance to the lower courts.”

But Leaming of the American Constitution Society wonders why the Supreme Court decided to hear this case. “Was it to uphold Judge Calabresi’s decision on a New York town’s prayer policy or slightly tweak it? I would guess not. I think instead you may have a chief justice who sees enough votes to change federal court precedent on prayer or religious activity in the public square.”

He adds that “the Roberts court is a radically right-wing court and has shown little concern with tossing precedent aside in numerous areas, such as First Amendment jurisprudence. So at the end of the day, I think we are looking at a disappointment for those who support a sound separation between government and religion. It could be a decision that redefines neutrality or at least broadens it a bit, to find other types of religious expression in the public square, and in particular at government functions, to be innocuous expressions or nods to majority whims or tastes.”

This article originally appeared in the November 2013 issue of the ABA Journal with this headline: “Another look at ‘10 tortured words’: The establishment clause is still a contentious battle among the justices.”