The Flip Side of ‘Reverse Payments’ 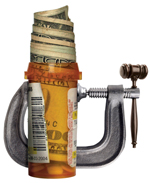 For the second time in three years a case about “reverse payments” is before the 2nd U.S. Circuit Court of Appeals. And this time the New York City-based court may ignore its own binding precedent and do a sharp about-face on the issue.

The last time the 2nd Circuit considered the issue, in In re Tamoxifen Citrate Antitrust Litigation, a three-judge panel allowed a maker of a patented drug to settle an infringement suit by paying off the alleged infringer, which had sought to make a generic version.

Such payments—in stark contrast to ordinary settlement practice where the alleged wrongdoer compensates the patent holder—are common in disputes between patented-drug owners and makers of allegedly infringing generics. The supposed infringer is not merely getting off scot-free but is also getting extremely well-compensated by the supposedly injured party. Reverse pay settlements can run into hundreds of millions of dollars.

According to the Federal Trade Commission, consumer advocates and many antitrust experts, these payments violate antitrust law; critics say they are no more than patent holders buying off their competition.

Yet the courts largely have dismissed this argument. In recent years the 2nd Circuit has joined the Atlanta-based 11th Circuit and the U.S. Court of Appeals for the Federal Circuit in Washington, D.C., in holding that reverse payments are almost entirely exempt from antitrust scrutiny.

Now this interpretation of antitrust law is being challenged in all three branches of the federal government. Under a new president, the Justice Department has changed its position, asserting that reverse payments are presumptively unlawful. Bills in Congress seek to eliminate reverse payments.

And the 2nd Circuit, in Arkansas Carpenters Health and Welfare Fund v. Bayer AG, is taking a hard look at whether to ignore precedent and require that reverse payments satisfy tough antitrust scrutiny.

There’s a lot at stake for everyone involved in health care, from drug companies to consumers to government health insurance programs. By delaying the entry of generic competition, reverse payments keep patented drug costs high. A recent FTC study estimated that if reverse payments are allowed to continue, these deals will cost consumers and other drug purchasers at least $35 billion over the next 10 years.

THREE OUT OF FOUR

“This is probably the most important unresolved antitrust problem in the U.S.,” says C. Scott Hemphill, who teaches intellectual property and antitrust law at Columbia Law School.

In three cases over the last four years, the circuits have said the broad monopoly granted by patents enables patentees to settle their infringement suits on terms that stop competitive products that infringe. Any anti-competitive aspects of reverse payments are “within the exclusionary scope of the patent” and thus allowed under antitrust law.

A reverse payment, these courts say, may violate antitrust law only under certain narrow circumstances:

• If a reverse payment settles a sham litigation.

• If the plaintiff’s patent was procured by fraud on the patent office.

• If the settlement goes beyond allegedly infringing items and restricts the manufacture and sale of noninfringing goods.

An older case from the Cincinnati-based 6th Circuit takes a very different view of reverse payments. In 2003’s In re Cardizem CD Antitrust Litigation, the appeals court held that these payments are per se violations of antitrust law.

However, courts in other circuits have distinguished Cardizem on the basis that the settlement in that case didn’t just forbid the generic company from making the allegedly infringing drug. The settlement also prohibited the defendant from making any other product that competed with the patented drug.

“In Cardizem, the settlement agreement applied to products in that space, whether or not they infringed. So it applied to noninfringing products, too,” says Sean Gates, an antitrust litigator in Los Angeles. “The 6th Circuit decision in Cardizem seems to deal with a situation where the exclusion goes beyond the scope of the patent, and that’s consistent with the 2nd Circuit, Federal Circuit and 11th Circuit cases.”

It’s unusual for an appeals court to revisit a legal issue decided a few years ago, but that is what the 2nd Circuit is doing in Arkansas Carpenters. The court is re-examining the validity of reverse payments; it specifically asked the Justice Department to submit a brief on this issue.

The panel hasn’t explained why it is reopening the issue. However, the 2nd Circuit’s earlier decision in Tamoxifen has been strongly criticized by many antitrust experts. The FTC continues to disagree with the ruling. Even the Justice Department under President George W. Bush asserted the legal standard enunciated in Tamoxifen was wrong.

Then President Barack Obama came into office promising tougher antitrust enforcement. “Because of the distinct change of policy [at DOJ], this might be the unusual case where a view contrary to the 2nd Circuit’s declared view should be given a hearing,” says Martha E. Gifford, an antitrust attorney in New York City.

Giving the DOJ a hearing, however, isn’t the same as adopting its position.

“Tamoxifen is binding precedent in the 2nd Circuit,” says Arthur J. Burke, a Menlo Park, Calif., attorney who co-chairs the Intellectual Property Committee of the ABA Section of Antitrust Law. “Since that decision, there has been no change in the Sherman Act, no intervening [U.S.] Supreme Court ruling. … It would be hard for the panel [in Arkansas Carpenters] to depart from the ruling in Tamoxifen.”

The Justice Department, however, has had little trouble changing its stance on reverse payments. Under Bush the agency indicated there were significant antitrust problems with these settlements, but shied away from offering any clear solutions.

The Justice Department declined to endorse the Federal Trade Commission’s view that reverse payments are presumptively unlawful, and that the parties involved in reverse payments have the burden of rebutting this presumption. The DOJ, moreover, never delineated what the legal standard should be.

“The Justice Department’s position was tremendously muddled and inconsistent with that of its sister agency, the FTC,” says David Balto, an antitrust attorney in Washington, D.C., and a senior fellow at the Center for American Progress.

Soon after Obama assumed office, the Justice Department got tough on reverse payments. In July the DOJ filed an amicus brief for the Arkansas Carpenters case, arguing the 2nd Circuit should abandon the Tamoxifen standard and recognize that reverse settlements presumptively violate section 1 of the Sherman Antitrust Act. This is “a change of course that aligns the DOJ’s position … with that of the FTC,” Gates says.

Congress is also taking a keener interest in reverse payments. Legislators are considering several proposals to do away with most, if not all, of these settlements.

In the House, Rep. Bobby Rush, D-Ill., sponsored an amendment to H.R. 3200, the House Energy and Commerce Committee’s version of health care reform. The Rush amendment would make reverse payments illegal. The committee approved this amendment in August, right before it sent H.R. 3200 up for consideration by the entire House.

A similar bill in the Senate to outlaw reverse payments was watered down in late September. The Senate Judiciary Committee approved a revised version of S. 369, and the bill would now make reverse payments only presumptively illegal under antitrust law.

This revision, proposed by S. 369’s original sponsor, Sen. Herb Kohl, D-Wis., aligns the legislation with the position taken in court by the FTC and the DOJ, but the bill is more explicit about what factors drug companies can use to rebut this presumption. The committee approved the bill in mid-October and sent it to the full Senate.

Sen. Bill Nelson, D-Fla., had suggested another approach. His proposed amendment to the health care reform bill of Sen. Max Baucus, D-Mont., would have taxed reverse payments at a rate of 100 percent. But this amendment didn’t make it into the bill passed by the Finance Committee in October.

Past proposals to stop reverse payments haven’t gone far in Congress; this year might be different, according to some observers. Thanks to increased Democratic majorities and a big push to reform health care, Congress may finally act.

“The odds have never been better than they are now,” says Michael A. Carrier, who teaches IP and antitrust law at Rutgers School of Law. “If we redo our health care system, this will be part of it.”