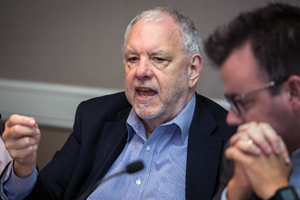 Richard Granat: “We’re going through the most radical change in the legal profession. … And the ethics rules will feel the pressure to change from market forces.” Photo by Kathy Anderson.

One of the biggest hurdles for lawyers seeking to adapt to—and adopt—technology affecting their practices is to sort through questions about how that technology relates to traditional ethics rules that have been in effect long before things like the Internet, the cloud and social media came into existence.

In recent years, efforts have been made to bring ethics rules into closer alignment with changing technology. In 2009, for instance, the ABA Commission on Ethics 20/20 was created to review the impact of technology and globalization on the ABA Model Rules of Professional Conduct, and to propose appropriate revisions in the rules. By the time it completed its work in 2013, the commission had developed a number of recommendations that were adopted by the association's policymaking House of Delegates on issues such as client confidentiality and the use of technology to attract new clients.

But many questions remain about how the Model Rules apply to technology, and new ones seemingly come up with every additional advance in technology. (The Model Rules are the basis for binding rules of professional conduct in every state, although California's rules use a different format.)

The implications of the need to keep up with the changing technology environment are set forth in Model Rule 1.1, which requires a lawyer to provide competent representation to a client. At the recommendation of the Ethics 20/20 Commission, the House of Delegates added language to the comments to Rule 1.1 stating that competence encompasses knowledge about "the benefits and risks associated with relevant technology."

Speakers on two panels held in August during the ABA Annual Meeting tried to offer some reassurance that the situation is not as intimidating as it might seem. But they also cautioned that law practice will never return to the bygone days before the world went digital.

A QUESTION OF COMPETENCE

One comforting reality is that there are limits to just how much lawyers are expected to know about technology under the revised Model Rule 1.1. While Comment 8 was revised to include knowledge about relevant technology as part of what constitutes competence, the Ethics 20/20 Commission let the existing language of the rule stand. The rule states: "Competent representation requires the legal knowledge, skill, thoroughness and preparation reasonably necessary for the representation."

In that context, "reasonably necessary" is the key phrase. "The bottom line is reasonableness," said Andrew M. Perlman, a speaker on one of the panels at the annual meeting. He served as chief reporter for the Ethics 20/20 Commission, and is a professor and director of the Institute on Law Practice Technology and Innovation at Suffolk University Law School in Boston. "You don't have to be paranoid," Perlman said. "No one is expecting you to be perfect."

Nevertheless, the precise meaning of technological competence under Model Rule 1.1, and how it fits with other elements of competence set forth in the rule, is likely to be the subject of extensive debate in ethics opinions and court decisions in the near future.

But if technology has changed how ethics rules apply to issues across the law practice spectrum, the changes are primarily a matter of degree rather than the actual substance of the rules. In the area of confidentiality, for instance, the days of simply protecting files of paper documents from loss or theft are past, said Daniel J. Crothers, a justice on the North Dakota Supreme Court who chairs the policy implementation committee in the ABA Center for Professional Responsibility. Today, said Crothers, who was speaking on the same panel as Perlman, "it's different because with cybersecurity, there can be thousands of potential thieves. It's a problem on a completely different scale than what we used to have."

In efforts to protect the confidentiality of client information, Crothers said, "we have to assume that someone can get at the information we have. The question is what we can do to protect it."

The Ethics 20/20 Commission developed a number of revisions to reinforce a lawyer's ethical duty to protect the confidentiality of client information, including material stored electronically. The key language is in Model Rule 1.6(c), which states: "A lawyer shall make reasonable efforts to prevent the inadvertent or unauthorized disclosure of, or unauthorized access to, information relating to the representation of a client."

But there's that word again: reasonable. Comments to paragraph (c) emphasize that the unauthorized access to or inadvertent disclosure of information relating to the representation of a client "does not constitute a violation of paragraph (c) if the lawyer has made reasonable efforts to prevent the access or disclosure." Furthermore, the comment states that the lawyer's duty "does not require that the lawyer use special security measures if the method of communication affords a reasonable expectation of privacy."

But the standard of reasonableness is continuing to shift with changes in technology and the growing use of such protective measures as encryption.

The growing use of social media by lawyers seeking to market their services is one of the key areas that illustrates the difficulties of applying long-standing ethics rules originally drafted with Yellow Pages ads and TV commercials in mind to new communications technology that allows lawyers to reach prospective clients around the country with the click of a button.

Notably, the Ethics 20/20 Commission left untouched the language of Model Rule 7.2, one of three key provisions in the Model Rules that address lawyer advertising and solicitation. But the commission did develop additional language recognizing the use of "lead generation" services, primarily over the Internet, which was added to the comment to Rule 7.2 by the House. In addition, amendments to Model Rule 7.3 governing solicitation of clients clarify that a lawyer may contact prospective clients by electronic means as long as it does not constitute "real-time" contact.

Various types of lead generation services "are proliferating all over the place," said Richard S. Granat, who spoke at another annual meeting program. Sites like Avvo can amount to marketing arms, especially for small law firms, said Granat, the co-director of the Center for Law Practice Technology at Florida Coastal School of Law in Jacksonville. He noted that even a few bar associations—the Columbus Bar Association in Ohio is one—are tiptoing into this area.

But there still are many unresolved questions, such as whether fee arrangements between lawyers and lead generators meet the requirements of Model Rules 7.2 and 5.4, which prohibits sharing legal fees with nonlawyers, according to Granat, who co-chairs the eLawyering Task Force in the ABA's Law Practice Division.

"We're going through the most radical change in the legal profession," Granat said. "It's tremendous, and it will continue as systems for marketing and lead generation continue to evolve. And the ethics rules will feel the pressure to change from market forces."

This article originally appeared in the November 2014 issue of the ABA Journal with this headline: "The Fundamentals: Lawyers struggle to reconcile new technology with traditional ethics rules."