After lawyer Sara Quirt Sann was murdered at work, her husband evoked Ephesians 6:10-20, a Bible passage about the armor of God, to describe her.

“She had to put her armor on every day and fight for those who needed representation,” Scott Sann wrote on Facebook. “Make no doubt in your mind that she was a warrior.”

Sann, 43, was a solo lawyer, and she did a lot of guardian ad litem and family law work in Wausau, Wisconsin. In early 2017, that included representing Naly Vang in her divorce from Nengmy Vang. It wasn’t going smoothly; Nengmy Vang was pressuring his wife to speed up the process by using a traditional Hmong divorce, in which their clan elders split their property and custody of their seven children. But Naly thought the American court process would better protect her.

It all came to a head on March 22, 2017, when Nengmy stormed into the bank where Naly worked and demanded that she sign divorce papers that didn’t exist. Two of Naly’s colleagues hustled her out the back door—and Nengmy shot them. He then drove to the law firm Tlusty, Kennedy & Dirks, where Sann rented an office, and forced an employee at gunpoint to show him where Sann worked. That employee told the police she then heard a scream, two gunshots and the sound of someone running down the stairs. Nengmy would go on to kill a police officer before officers fatally shot him.

The murders shook up Wausau, a central Wisconsin city of about 40,000 that just a year earlier the FBI had called one of the safest metro areas in the Midwest.

“It was just such a shock,” says Pam VanOoyen, a friend of Sann’s and a judicial coordinator for a Marathon County judge. “We’re not as big as Green Bay or Milwaukee or Madison, even, for that matter. And so we’re all really connected.”

In response, citizens formed Wausau Metro Strong to build a safer community. Among its projects was Sara’s Law, a measure that makes the penalties for battery or threats to a family lawyer a low-level felony, as it would be for battering a police officer or a judge. In most other circumstances, battery must cause great bodily harm to carry the same penalties. The bill passed the state legislature easily; Wisconsin Gov. Scott Walker signed it April 11 in a courtroom named for Sann.

Attorney Jessica Tlusty—who runs the firm that rented Sann her office—helped lead the Sara’s Law effort. She says the law grew out of Scott Sann’s wish that his wife had better protection. Tlusty practices family law herself, and she says threats and violence are too common. 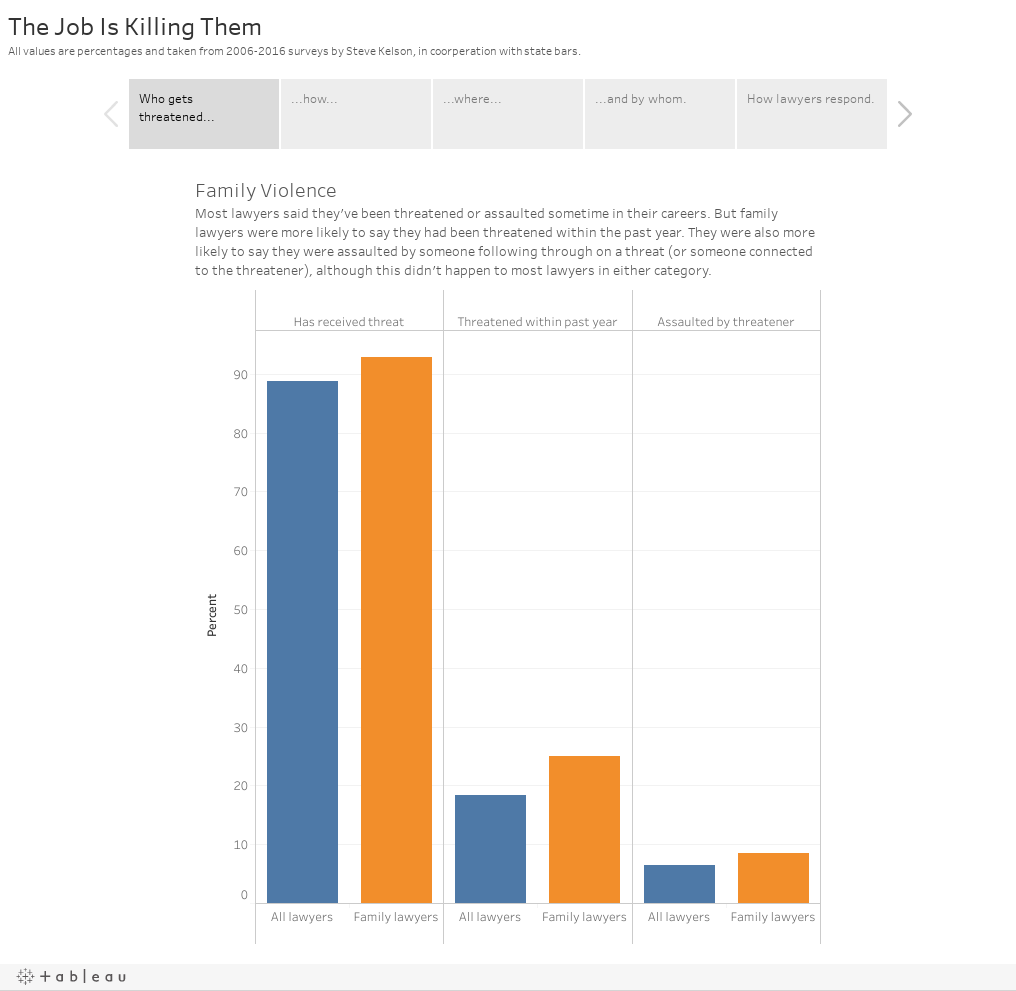 ‘It’s the Risk You Take’

A series of surveys on violence against lawyers shows that family lawyers face disproportionate amounts of threats and violence compared to other lawyers. Almost all lawyers in the 27 states surveyed said they’d received some kind of threat or experienced violence. But the rate for family lawyers was higher. Steve Kelson: “It seems as though upfront, many people said, ‘Well, it’s part of practice – you need to expect it.’ There’s also kind of an impression ... ‘Yeah, there’s a lot of threats, but nothing will happen about it.’ ” Photo by Busath Photography.

Lawyers have reported receiving threats about their children being raped, having their car tires slashed, and seeing clients shot to death in front of them.

“We are often looked at as the cause of many problems in custody cases because the parties want someone to blame,” Tlusty says. “So threats tend to come toward the attorneys.”

The surveys come from Salt Lake City attorney Steve Kelson, who has a full-time business litigation practice at Christiansen & Jensen. One of his law school professors had said the issue was understudied, and Kelson discovered he was right—no one was tracking it in the United States. He took up the challenge in 2006, surveying Utah State Bar members.

He has since surveyed just fewer than 12,000 lawyers in 27 states, most recently in New Hampshire in 2017. Lawyers generally are recruited by state bar associations to participate voluntarily and anonymously. Kelson provided state-by-state data to the ABA Journal, which used it to compile national numbers.

When responses are broken out by the lawyer’s practice area, family lawyers consistently have higher rates of threats and violence. Kelson says criminal lawyers also reported an above-average rate of threats and violence, as did lawyers choosing “general practice,” which could include many practice areas. This might not come as a surprise for lawyers specializing in criminal cases, whose clients or opposing parties sometimes have a history of violence.

But family lawyers’ work is civil—and 92.8 percent, more than lawyers generally, had experienced some kind of threat or violence. Family lawyers also were more likely to say they’d experienced in-person confrontations, property damage or assault. When they were assaulted, the person responsible was more likely to be someone who already had threatened them (8.5 percent vs. 6.4 percent for all lawyers). About a quarter of family lawyers said they’d been threatened within the past year; only 18.4 percent of all lawyers said that.

Kelson’s surveys suggest most of those threats are coming from opposing parties. While lawyers in general were more likely to say they were threatened or attacked by a client, only 38 percent said they were attacked or threatened by an opposing party. For family lawyers,that rate was a much higher 54.4 percent. It’s a reality for many of the family lawyers who answered Kelson’s surveys.

“As a family law attorney, there have been many times whenI have been confronted in person … and threatened,” a Nevada lawyer wrote in response to Kelson’s 2012 survey. “It seems to come with the type of law I practice.”