The Plain Truth: Go for Simple Words if You Want to Communicate Effectively 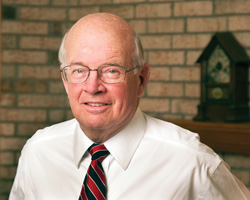 Editor’s Note: Jim McElhaney’s 25-year run as Litigation columnist for the ABA Journal comes to a close with this issue. During those years, McElhaney’s straightforward advice on trial practice became one of the most popular features in the magazine. To recognize McElhaney’s contributions, the Journal has been reprinting some of his “greatest hits” from the past quarter-century. This article, which originally appeared in the Journal’s December 2001 issue under the headline “Empty Words,” sums up one of his most enduring themes: the importance of simplicity.

I stopped in at the Donut Hole on Monday morning for a cup of Dark Mountain Roast, and Nick Wheeler was there talking to Angus about a training program for the new lawyers at Randolph and Wheeler. “How,” said Nick, “could anyone write something like this:

“ ‘Manifestly, the failure of the respondent timely to reply to petitioner’s written demand for compliance with the terms of the aforesaid agreement requiring delivery of the Interface Prototype before Aug. 1 was ample justification for the application of the doctrine of anticipatory breach which operated to free the petitioner to seek and obtain a source for substitute performance.’ ”

“And the respondent?” said Angus.

“What I think it means,” said Angus, “is that when Metropolitan Circuitry ignored Arrowhead’s letter, Arrowhead decided it needed to hire someone else to make its Interface Prototype—whatever that is.”

“Who wrote this mystery sentence, anyway?” I said.

“That’s what hurts,” said Nick. “It’s an inside job. One of our associates did a draft of a brief for a partner who went berserk when she read it. And she’s right. It’s bad enough that it’s incomprehensible, but it was actually supposed to be persuasive.

“So I want to ask you, Angus, would you be willing to give our new associates a course in effective legal writing? Teach them how to avoid this kind of polysyllabic obfuscation?”

Angus thought for a second, and then said, “OK, but on condition that …”

“Anything!” said Nick. “Whatever you want.”

“That it won’t be just a writing course,” said Angus. “That it will be a writing and speaking course. After all, lawyers are supposed to be wordsmiths. Whether or not we ever go to court or even write a brief, all of us are professional writers and speakers. It’s what we do for a living.”

“But aren’t you biting off too much?” said Nick. “Seems to me that the skills involved in good writing and good speaking are so different that you’ll wind up taking far more time than it would take to teach two separate courses. Like they say, write to the eye and speak to the ear.”

A few days later, Angus started his first session at Randolph and Wheeler with a talk before breaking up the class into small workshops. Here are my notes on what he said.

Today, most lawyers in the United States share the common burden of having gone to law school. This is a difficult rite of passage—not because the legal concepts are so hard but because law school requires conforming to a strange new culture and learning a remarkably different way of thinking and speaking.

Law school is as much obscure vocabulary training as it is legal reasoning. At its best, it can teach close thought and precise expression. But too often law school is reverse Hogwarts—where Harry Potter trained to be wizard—that secretly implants into its students the power to confuse other people instead of sowing the magic seeds of clarity and simplicity.

How does that happen?

The unspoken but central message of law school is: If you want to be a lawyer, learn to write like the judges who wrote the opinions in your casebooks. And even worse, learn to talk like a law professor.

As students anxious to try on our robes and pointed hats and wave our wands, within days we start mimicking the mediocrity of our mentors. “Hey, I got a date Saturday night,” says one new student. “Oh, yeah?” says the other. “Are you the datee or the dator?”

And our minds become obsessed with words and phrases like egregious, contumacious, manifestly, clear beyond peradventure, vel non, with respect to, failure of consideration, subsequent remedial measures, voir dire, cause of action and meretricious.

So we lard our speech and writing with words and phrases of awkward obscurity that rarely have anything to do with legal precision but that unmistakably say, “This was written—or said—by a lawyer.”

The problem is that they are hollow, empty words that—even put together properly—don’t tell us a story. To prove that point, Angus read the one-sentence paragraph that Nick had used to lure him into teaching the course. Go back and read it again yourself, and puzzle over what the story is until you read Angus’ translation.

Because we are professional communicators, it is our obligation to be plain and simple. It’s not our readers’ and listeners’ jobs to try to understand us. It’s our job to make certain that everything we write and say commands instant comprehension.

And because we weren’t turned out that way by our law school training, we have to reprogram ourselves if we want to become effective communicators.

You might think that the right way to clear the clutter out of your personal verbal warehouse would be to make a list of the words that you swear you will never use again.

But the difficulty is that every word in your vocabulary has its own set of habits that bring it out when your subconscious thinks it might fit the situation. You can’t just roam through your mind, pushing the delete button every time you find oddities such as “indicate for the benefit of the jury” and “failed to elicit a satisfactory response.” It won’t work.

When you test your case against the rules that might apply to it, you pour the facts into the legal box to see how they fit. Of course, the tops and bottoms and slats and sides and the corner reinforcements of every box are made out of legal jargon. Squeeze your case into the legal box, and it will hand you the list of words it expects you to use.

But you don’t need to do that, even when you’re writing a brief. If you concentrate on the human story instead of the legal box, the story will pick the right words for you.

Why? Because it’s easier to play a different game that’s governed by different rules than it is to change all the rules in the game you’re playing.

The first step in becoming a good writer and speaker is to concentrate on the story. Let the story—not the legal theory—pick the words.

That’s when one of the young associates in the class asked whether Angus’ story theory—as she described it—could possibly work in a legal argument like the Arrowhead case.

“I’m glad you asked,” said Angus, “because it’s a chance to compare the power of facts with the power of legal buzzwords. I’ll just add a few details of the sort you would know if you were actually in the case.

“Arrowhead Electronics had come up with a brilliant new idea for linking computers together without anything except a simple cable. No modems, no fancy switches, no tangle of wires. Arrowhead had invented what eventually became the network interface card that lets computers talk directly to one another.

“But the problem was that Arrowhead couldn’t make the first model of its own invention. The company had it all on paper, but their people couldn’t prove it would work until they could actually test it.

“Arrowhead was worried. Other companies were rumored to be working on similar projects. Would someone else beat them in the race for a new kind of computer card?

“So Arrowhead’s people called Metropolitan but never could talk to the folks in charge. They left phone messages, but Metropolitan didn’t return their calls. They sent emails that Metropolitan ignored. Finally, Arrowhead sent a certified letter to Metropolitan saying it had to have the prototype by Aug. 1, or it would be too late.

“And Metropolitan didn’t answer that letter, either.

“That’s when Arrowhead knew it couldn’t count on Metropolitan to do the work its people had already taken $120,000 for and hadn’t even started.”

Angus stopped and looked around the room. “In law school,” he said, “I think that’s what’s called an anticipatory breach.”