The Quaint Notion of Shame: For Some, a Lack of Conscience Shows a Lack of Humanity 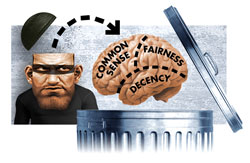 In a world where “journalists” hack the cellphones of fallen soldiers’ families and a crazed shopper pepper-sprays a crowd at a Wal-Mart to get a discounted Xbox, it seems that shamelessness is no longer actually shameful. We’ve seen so much that our response is often just a deep sigh of resignation.

And while we’re at it, we might also bemoan the decline of common sense, fairness and decency, if some recent lawsuits are any indication.

Let’s start with common sense. It’s not something that your average criminal possesses in spades. So in September 2009, when a murder suspect stole a car and crashed it in the yard of a couple near Topeka, Kan., he somehow figured they’d be willing to cut him a deal.

But knife-wielding Jesse Dimmick eventually dozed off at the home of Jared and Lindsay Rowley, at which time they slipped out and called the cops. During the arrest, an officer’s weapon discharged accidentally, striking Dimmick in the back.

The Rowleys sued Dimmick in September for trespass, intrusion and negligent infliction of emotional distress. Dimmick answered in October with a countersuit, seeking to have the Rowleys’ claim dismissed and charging breach of contract.

Dimmick says he offered the couple an unspecified amount of money to hide him from police, and no doubt they were quite willing to tell him anything he wanted to hear at the time. But Dimmick insists a deal is a deal, and he wants $235,000 from the Rowleys for breaking “a legally binding oral contract.” (After this story went to press, a judge dismissed Dimmick’s lawsuit.)

Fairness took a pounding when George Hinnenkamp, 91, of Eugene, Ore., not only had his car stolen but was sued after the thief crashed it. His 1991 Thunderbird was swiped in June 2009 by Joseph Dinwiddie, who’d done some odd jobs for Hinnenkamp. Two passengers injured in the crash sued Hinnenkamp in November, claiming that Dinwiddie was his employee and had been allowed to use the car in the past for errands—and so, ipso facto, Hinnenkamp was responsible for damages.

A bit of conjecture here might yield a theory that because the vehicle was insured, the passengers may be banking on the insurance company settling to avoid a trial. In any event, Hinnenkamp will endure enormous hassle and possibly have his premiums raised.

And decency was nowhere to be found when a sex offender tried to sue the mother of his child victim. Why? Because she wrote about him in a blog, and the poor guy was having trouble getting a job.

Patrick Rojas, 26, filed a lawsuit in King County, Wash., against Danielle Schneider because potential employers’ background checks would inevitably lead to Schneider’s pesky blog, where she claims that Rojas has perpetrated attacks on other minors as well.

In November, a judge dismissed Rojas’ case with prejudice. In December, he filed a motion to appeal.

Ours is a society in which human interaction is being devalued. It may be partly due to the impersonal nature of the Internet. We’re more likely to tweet than meet, more likely to poke than share a coffee and a joke.

And that’s a shame.

Updated Feb. 1 to note that this article went to press in early January.