The State of State Courts: Judges Want Qualifications in Any Disqualification Rules

By Terry Carter and James Podgers 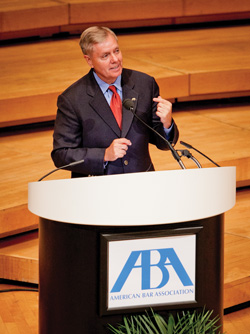 It is a given that democracy is necessarily messy, and perhaps also more interesting at just such times. Things certainly sounded that way at ABA Annual Meeting programs on judicial disqualification and proposed changes in the ABA Model Code of Judicial Conduct (per, in effect, recommendation of the U.S. Supreme Court).

Back-to-back sessions by the Standing Committee on Judicial Independence—“Second Annual Forum on Judicial Independence: The Changing Landscape of Judicial Disqualification” and a roundtable discussion presented by the Standing Committee on Ethics and Professional Responsibility—showed how the effort for stricter, more detailed guidelines is both sticky and thorny.

Three years ago when the Supreme Court ruled in Caperton v. A.T. Massey Coal Co. that independent campaign expenditures on behalf of a West Virginia Supreme Court justice running for re-election created a “serious risk of actual bias,” it also recommended states with judicial elections adopt stricter disqualification standards to shield against the recent influx of huge amounts of cash into such races.

Six months later, the high court poured gasoline on the still-hot coals of the fire many hoped it had cooled: In Citizens United v. Federal Election Commission the court said that, through independent expenditures, corporations and unions could throw all the money they wanted at elections.

During the presentations, state judges expressed concerns about a one-size-fits-all approach—given that states have tinkered to make their own versions of the Model Code; and that they have different election and appointment systems, and different legal cultures.

When the roundtable got granular, Myles V. Lynk, chair of the ABA Standing Committee on Professional Discipline, assured others that any revisions to the code would not include specific dollar amounts for contributions that could trigger need for disqualification. There will be brackets in the model, and states can fill in the blanks.

The practical impact of heightened interest, partisanship and money in state judicial elections was apparent in the plight of one of the four state supreme court justices on the earlier panel. Justice Peggy Quince of the Florida high court said her retention election this year is quite different than in the past.

For one, she and two other colleagues have been sued by parties trying to get them off the ballot, which brings up a particularly interesting question as far as conflicts and disqualifications are concerned: “What lawyer can you get who you would want to represent you that does not have a lot of cases that are going to come before the court?” she asked, getting a good laugh.

It was Benjamin’s re-election that Massey Coal pumped so much money into. The justice noted something that apparently Massey did not put before the Supreme Court: Before the case at hand, he had ruled against Massey 80 percent of the time; and for every dollar the company got in benefit from his decisions, it lost $6 in others. His votes on various decisions helped cost the company $17 million.

Sept. 15 is the deadline for comments on the work-in-progress draft of revisions to the Model Code.

Later, in his keynote speech at the opening session of the annual meeting, Sen. Lindsey Graham, R-S.C., said politics is putting the independence of the federal judiciary at risk.

“I’m really worried about how we’re doing confirmations,” said Graham, who serves on the Senate Judiciary Committee. “They’re turning into political events. I’m a conservative, and I’d like conservative judges on the federal bench,” he said, but if President Barack Obama is re-elected in November, then “his nominees are entitled to be confirmed as long as they’re qualified.”

Expressing concerns that the confirmation process is becoming a litmus test for the political philosophies of nominees, Graham said, “The question is: Are you qualified? It’s stupid to pick on something you said in law school and pick on this or pick on that. I’m not worried about judicial activism. I’m worried about Senate activism.”