What is the state of the legal blogosphere? 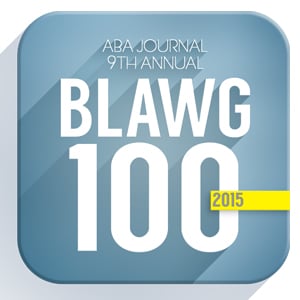 In 2015, there's no longer a Legal Blog Watch at the National Law Journal. But law blogging appears to be flourishing.

Even the slow-to-embrace-change world of BigLaw is increasingly on board with blogging, whether to draw in potential clients or market the expertise of their lawyers.


In a review of top law firms ranked by The American Lawyer, LexBlog CEO and Real Lawyers Have Blogs author Kevin O’Keefe reported in July that 18 of the top 25 law firms are blogging. And a full 82 percent of firms in the top 200 are blogging, according to LexBlog’s 2015 Am Law 200 Blog Benchmark Report.

“In the past seven years alone, Am Law 200 firms have increased the number of blogs they publish from 74 to 962,” the report states. “That’s an exponential growth in less than a decade.”

The picture presented by the 2015 ABA Legal Technology Survey Report isn’t as rosy, showing little to no growth when it comes to law blogging by a wider range of firms, with 26 percent of respondents reporting their firms had blogs. That’s up from 22 percent in 2012, but down from 27 percent in ‘13.

There’s been an unmistakable shift in blogging, particularly in the legal blogosphere.

In those early days, blogs were raw, daring, confrontational. Strong personalities emerged, and they waged intellectual battles back and forth in blog posts and in their comment sections. They traded the spotlight on Blawg Review, a blog carnival loosely connected through the anonymous “Ed.” (short for editor), who monitored their posts and encouraged camaraderie.

Then in 2013, “Ed.” died unexpectedly, and Blawg Review went with him.

Since then, some of our favorite blogs have been shelved or shuttered: The Not-So Private Parts, Legal Underground, Law21, Becker-Posner, Hercules and the Umpire. The list goes on.

What happened? Is this a sign that law blogging is on its way out?

“Despite all the claims of the blogosphere dying out, to me I still continue to see an expansion of it,” says Ambrogi, a blogger at LawSites and a regular contributor to the ABA Journal. “The quality of the blogs getting launched is often very good.”

A shining example is SCOTUSblog, which was founded in 2002 and in 2013 became the first blog to win the prestigious Peabody Award for excellence in electronic media.

“SCOTUSblog is the best example of a blog that is entirely mainstream,” Ambrogi says. “It’s the single best source of reporting on the Supreme Court.”

Above the Law, once a gossipy tabloid, has diversified its coverage over the years to include legal education, mindfulness, solo/small-firm practice and legal technology.

“It’s easier to be a fan now that it’s more mature,” says Staci Zaretsky, who began writing for Above the Law in 2010. Zaretsky says ATL has made a journey from gossiping about what people wear to practical discussions of small-firm life, criminal defense and wellness.

“It’s in some ways probably one of the most-read legal publications in the legal field,” Ambrogi says, adding that blogging has become one of the “central parts of keeping up with what’s going on in the legal profession.”

It’s safe to say that many readers don’t even think about blogs as blogs, but rather as sources of information.

“Blogs have sort of been another way the Internet has democratized information,” Ambrogi continues. “Commentary and analysis blogs are filling in a space lawyers might not have had access to without being able to subscribe to a Westlaw, Lexis or a legal publication.”

Besides SCOTUSblog, a prime example is the developing field of e-discovery.

“There’s no good way to follow that news unless you are following blogs,” Ambrogi says. Blogs, which are easy to access and unlike pricey legal research services and publishers, are most often free. Yet in aggregate, they cover every aspect of e-discovery from the latest cases to analysis and practice tips. Ambrogi says that more and more blogs are filling a gap left by the publishing industry because their products and publications either weren’t affordable enough or weren’t comprehensive enough.

That’s not to say there haven’t been some big voices that have quieted down or disappeared entirely.

The ABA’s Legal Technology Survey Report notes a drop in the percentage of lawyers who maintain a law blog from 9 percent two years ago to 7 percent this year.

“Certainly, there are a number of blogs that have gone dormant or abandoned,” says Ambrogi, noting that St. Louis lawyer Evan Schaeffer announced in August that he was putting his 11-year-old blog, Legal Underground, on extended hiatus.

“People get tired of it or just get busier and unable to keep up with it or get busy with other projects,” Ambrogi says.

The commitment to blogging regularly can be intense. Veteran bloggers often start to feel a sense of déjà vu.

“Sometimes it wipes you out,” Zaretsky says about blogging and disheartening commenters. It’s also difficult to write about the same things day in and day out for years and years, she says. “It’s hard to make things new and exciting.”

Even New York City criminal defense lawyer Scott Greenfield, who never seems to lack for something to say or someone to criticize on his blog, Simple Justice, called it quits once. That was five years into blogging for him in 2012. But his retirement wasn’t a long one, and he’s been faithfully posting multiple times a day ever since.

“The bottom line is that you burn out,” Greenfield says. “After a while, you feel as if you said everything you’ve got to say. You feel like you’re repeating yourself. It’s almost a sense of futility. How can you keep doing the same thing over and over?”

Greenfield is among those who are lamenting what they see as the death of the “practical blogosphere.”

He remembers those early days of legal blogging as full of near-constant interaction; a playfulness between bloggers; and arguments, disagreements and strong opinions in the comments.

Now Greenfield looks at his blogroll and sees dead links and few, if any, updates. “I think the people who are doing it at this point are doing it as pro forma marketing,” he says. “There’s no zeal left in it, no energy left in it.”

Kashmir Hill, a senior editor at Fusion in San Francisco, isn’t so sour on the state of the blogosphere, though she acknowledges a change.

“I feel like there’s less Internet linking than there used to be, less talking to each other” and more talking to an audience, says Hill, whose popular blog, The Not-So Private Parts, is now delivered via weekly newsletter in her privacy roundup.

“I miss that vibrant commenting community,” she says. “People don’t have to comment on your blog anymore. They can tweet a piece and comment that way. It really has moved the conversation out of the blog into the social media platform.”

In the past, if Hill had a reaction to someone else’s blog post, she would write about it on her blog. Now she tweets her immediate thoughts. When she notices it’s taking her two to three tweets to get her thoughts across, Hill will often write up her thoughts more thoroughly in a post.

Hill, who has blogged at Above the Law and on the Forbes platform, still carefully follows the blogosphere to keep up with the topics that are important to her work as a journalist.

“I still rely so much on legal bloggers to help me figure out where to take a story and what the important parts are,” she says, specifically noting George Washington University Law School professor and Volokh Conspiracy blogger Orin Kerr as a must-follow for his thoughts on the development of privacy law. “Journalists really need [law bloggers]. It’s so important for making sure the legal implications of stories get explored.”

‘NOT FOR THE FAINT OF HEART’

“I think the legal blogosphere was important in not having state laws being immediately struck down,” Hill says. The discussion online, with input from lawyers, was more sophisticated and addressed First Amendment implications.

Before she started blogging in 2012, Bricken didn’t even read blogs. And when she thought about blogging and started to read blogs, she was intimidated. But she had a good role model close by—Dan Harris, who (along with Steve Dickinson) pens the popular China Law Blog and is a partner at her firm, Harris Moure.

Once a one-woman show, Canna Law Blog has grown with the practice at Harris Moure and now has several contributors.

So how does Bricken have time to blog? “The truth is we don’t,” she says. “We mine what our clients are going through” and write about those issues.

In the process, she and her fellow bloggers are building a strong reputation as experts in this developing niche. While there’s a perception that bloggers can gain clients by blogging, that’s not been the case for Bricken (or Greenfield).

“It’s not a fantastic generator of leads,” she says. “It’s demonstrative. We want to be the experts” with a “realistic, boots-on-the-ground perspective.”

And while she’s not seen paying clients come in the door because of the blog, she has attracted speaking engagements and conversations with congressional aides and staffers, banks and other financial institutions.

“Law blogging is not for the faint of heart,” Bricken says. “But done correctly it is a very powerful tool in this advanced technological age.”

This article originally appeared in the December 2015 issue of the ABA Journal with this headline: “The state of the legal blogosphere.”