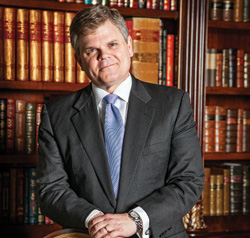 Where do the new entries come from?

Legal literature. I’ve maintained a reading program to canvass the vocabulary that lawyers, judges and legal scholars use. Through teaching legal drafting and advocacy, I’ve gained hundreds of allies who send me leads.

How are terms dated for first appearance in English?

That’s the job of Fred Shapiro, a contributing editor of Black’s. Shapiro is a brilliant reference librarian at Yale Law School who has cultivated expertise in legal lexicography for many decades. Through his labors, we’ve been able to date legal terms more accurately than other historical dictionaries, such as the Oxford English Dictionary. Using scholarly databases, Shapiro has antedated hundreds of terms to give all users of Black’s Law Dictionary a better understanding of the history of legal terminology.

Why are scholarly sources cited more than cases?

Generally speaking, it’s more useful to know what Prosser said about a given tort than what a court has said. Prosser based his analysis on dozens or perhaps hundreds of cases. Charles Alan Wright did the same in discussing federal courts. That’s what the best scholars have always done. Courts, on the other hand, tend to discuss terminology in a case-specific way—and often without the same depth of insight.

In the mid-20th century, Black’s was in danger of becoming merely a compilation of judicial pronouncements about meaning, not really a work of lexicography at all. It contained definitions, often inaccurate ones paraphrased from case law, for many nonlegal terms—including hotel and Boston cream pie. I cut all the words not properly classifiable as legal and redefined the rest.

In writing a single definition, I might consult 20 or 30 cases—no one of which would accurately capture every nuance. So yes, I’ve avoided citing lots of cases, apart from U.S. Supreme Court opinions. Lawyers everywhere tend to be interested in the high court’s declarations of meaning. Otherwise, though, lengthy lists of court cases that discuss terminology can be found in Words and Phrases.

Why all the new Latin maxims?

Latin maxims have long appeared in English and American law, and they’ve never been so accurately recorded. I’ve moved the full Latin sentences to Appendix B. They tended to clutter the main text, and now it’s easier to find the maxim you’re looking for or to ignore them all.

Let me illustrate how the new maxims were collected and defined for the 10th edition. Although the ninth edition contained the most extensive, accurate listing in print, my colleagues and I unearthed more. Consulting a 40-volume encyclopedia published between 1901 and 1913, I noticed its coverage of legal maxims was particularly thorough. I assigned two student assistants who had studied Latin to find all the maxims not included in the ninth edition. After 90 days of reviewing tens of thousands of pages in that encyclopedia, they identified 1,000 new maxims—or, rather, old maxims that had never been recorded in Black’s. Then one of my five lawyer-colleagues at LawProse, Heather Haines, meticulously verified the accuracy of their work against the encyclopedia, making many corrections. Once all was in line with the encyclopedia, I edited the definitions in a nonsubstantive way so as to make the wordings more idiomatic and modern.

Then I sent the 1,000 maxims off to two superb classicists in Missouri, professor Edwin Carawan and his wife, Alison Parker. They spent three months correcting the Latin, amending the translations, and supplying citations to Roman-law classics such as Justinian’s Digest. They identified 100 candidates for admission as being mere gibberish; these I rejected. In all, Carawan and Parker thoroughly revised about 85 percent of the newly discovered maxims. It was an arduous process that revealed the unreliability of the old encyclopedia.

Once all their corrections had been entered, I sent the remaining 900 maxims to professor Tony Honoré of All Souls College, the emeritus regius professor of Roman law at Oxford University. He modified the translations of perhaps half the maxims, noting that a certain medieval concept might be better translated with a term other than the one in the then-current draft. It took Honoré 60 days to do his work. Back in Dallas, all his corrections were entered and doubly verified.

The polished revision went back to Carawan and Parker, who found several remaining errors in the Latin. They were grateful to see Honoré’s work, and they found several additional points of improvement.

Once the final corrections were entered and verified, the maxims went into Appendix B. It took a week for a LawProse staffer to verify the alphabetical ordering of all the maxims, now totaling 4,000.

Having gone through this process with all the Latin maxims in the seventh through ninth editions, we’ve uncovered and corrected hundreds of errors in the Latin that appeared in the first six editions. Those errors might have occurred in the sources that Henry Campbell Black and other lexicographers consulted in the 19th century, or they might simply have been transcription errors.

What I’ve just described is the typical process.

Why revise entries with each new edition?

Because everything needs reconsideration. The United States Code changes year by year, and so do codes such as the Uniform Commercial Code. The new 10th edition is up to date as of March 2014.

By 1990, the citations to these 1920s state cases had been dropped, but the entry was otherwise verbatim, making the repetitiousness more noticeable:

Abandon. To desert, surrender, forsake, or cede. To relinquish or give up with intent of never again resuming one’s right or interest. To give up or to cease to use. To give up absolutely; to forsake entirely; to renounce utterly; to relinquish all connection with or concern in; to desert. It includes the intention, and also the external act by which it is carried into effect. In the 2014 10th edition, the senses are numbered and more acutely distinguished:

abandon, vb. (14c) 1. To leave (someone), esp. when doing so amounts to an abdication of responsibility. 2. To relinquish or give up with the intention of never again reclaiming one’s rights or interest in. 3. To desert or go away from permanently. 4. To stop (an activity) because there are too many problems and it is impractical or impossible to continue. 5. To cease having (an idea, attitude, or belief); to give over or surrender utterly. 6. To leave (a ship) because of sinking or the threat of sinking. 7. Insurance. To surrender to the under-writers the insured’s interest in (the insured property) while claiming payment for the total loss.

Space constraints preclude illustrating the degree to which subentries are now set forth and scholarly commentary lends historical depth to the entries. You might want to see for yourself.

To suggest new terminology for the dictionary, email [email protected]. The only requirement is that new terms must appear with some frequency in historical or current legal literature.

Bryan A. Garner, the president of LawProse Inc., is the author of many books and has been editor-in-chief of all editions of Black’s Law Dictionary since 1994.