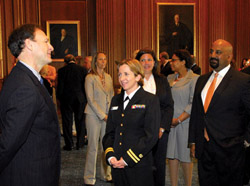 Hugo M. Pfaltz Jr. likes to say that in 12 years of appearing before the U.S. Supreme Court, he never failed to come through for the people he represented. “Each time my motion has been approved without dissent,” he says. Granted, Pfaltz does not appear before the justices to argue controversial matters of constitutional law. Instead, for the past dozen years he has closed a session of the Supreme Court by moving that a group of attorneys accompanying him be admitted to practice before its bar.

The ritual played out most recently on June 1—the day after Memorial Day—when Pfaltz rose to the lectern before the justices and invoked the traditional “Mr. Chief Justice, and may it please the court,” before requesting that 20 colleagues from as near as Baltimore and as far as Bend, Ore., be admitted to the Supreme Court bar. As usual, the outcome was never in doubt.

It was not coincidence that brought this group of lawyers together in the high court chambers that morning. They—along with spouses, children and other family members—were participating in the annual U.S. Supreme Court Trip sponsored by the ABA’s Senior Lawyers Division. The program was started about 15 years ago by William J. Brennan III, son of the late Supreme Court justice and himself a prominent attorney in New Jersey until his death in 2004. The younger Brennan passed the project on to Pfaltz, a friend and fellow member of the New Jersey bar who, at the age of 79, still practices full time at the Summit firm of Pfaltz & Woller. And he has no plans to retire from the Supreme Court trips, either.

For many lawyers, Pfaltz says, the ABA’s Supreme Court Trip is a once-in-a-lifetime experience.

“Washington is the center for everything, and the Supreme Court is the center of our legal system,” he says. “But many, many lawyers have never been to Washington.”

The special thing about the trip, says Pfaltz, is that it is a shared experience. “I think this is a very significant thing for lawyers to do,” he says. “Although they can get admitted to the Supreme Court by a written statement, it’s far more meaningful for them to go with their families to the court and actually hear parts of an oral argument.”

YOU HAD TO BE THERE

Timing this year’s trip for the Memorial Day weekend gave it some added luster. The schedule included a tour of the Capitol on Friday after noon, tickets to the National Memorial Day Concert on Sunday evening and a prime viewing spot for the parade on Monday.

But it wasn’t until dinner Monday evening that the next morning’s 20 admittees would all be in the same room long enough to get to know each other.

First to arrive were Corey Bott and Kimberly Bradley, both employee pension practitioners from Baltimore, and Timothy Williams, a personal injury attorney from the central Oregon city of Bend. They were soon joined by Thomas Beem, a tax lawyer from D.C.

These four lawyers enlivened their corner of the room discussing the very fields—ERISA and tax—that Supreme Court watchers are most loath to follow. The justices, on the other hand, are known to enjoy such cases.

Over the next half-hour, more of the lawyers filtered in. As the conversation picked up, men and women in various phases of their careers and from all across the country expressed their eager anticipation for the next morning’s ceremony.

“After 40-odd years of practice, this year I decided to do the right thing,” said Paul Sutton of New York City. Sutton, the son of a farm er and the first in his family to go to college, used his engineering degree as a foundation for building his successful patent law practice.

But topping off his credentials with an admission to the Supreme Court bar was not the only reason he was looking forward to the next morning. “I hope the justices announce Bilski,” Sutton said, referring to Bilski v. Kappos, a case that could transform U.S. patent law.

Not everyone had followed a strictly traditional path into the law. Theresa Madonna of Jewett City in eastern Connecticut said her solo practice in bankruptcy and foreclosure defense was her third career. “I got my law degree because I was bored,” she said.

Her happily retired husband told her that he would buy her whatever she wanted if she passed the state bar exam. Now Madonna rides a Harley-Davidson to work.

On Tuesday morning, a group of sharply dressed lawyers boarded a bus that would take them to the Supreme Court Building across First Street from the Capitol. Swadesh Kalsi, a retired international trade lawyer and qualified British barrister from Indianapolis, expressed the thoughts of the group when he explained why he signed up for the trip to be sworn into the Supreme Court bar. “It’s an honor,” he said. “I really want to do this.”

While sharing Kalsi’s view, Otis Stephens Jr., a longtime faculty member at the University of Tennessee in Knoxville who is a contemporary of the older justices, also figured it was about time. “There is no time like the present,” said Stephens, who joined the university’s political science faculty in 1967, graduated from the law school in 1983 and now is resident scholar of constitutional law.

The Supreme Court is a familiar haunt to Stephens, who has been blind since birth. He has sat in on many oral arguments, and as his daughter guided him up the steps to the Supreme Court plaza, Stephens reminisced about visits to the court going back to the late 1950s.

“Justice [Felix] Frankfurter really, really cross-examined the attorneys,” Stephens said, while Chief Justice Earl Warren, by contrast, “had a nice, personable style.” As a political scientist, he found Justices William J. Brennan Jr. and Thurgood Marshall to be “extremely effective in oral argument.” On more recent visits, he found Justices Antonin Scalia and John Paul Stevens to be “memorable in the way they talk” from the bench.

Upon entering the court building, the lawyers were led to the West Conference Room for a pre-ceremony briefing from William Suter, the clerk of the court. Portraits of the 20th century chief justices—from Edward Douglass White to William H. Rehnquist—solemnly looked on. In the back corner, beneath a portrait of Charles Evans Hughes, Jane Conners quietly brushed away tears. Conners, a sole practitioner in San Diego, was thinking about her mother. They had planned this trip a year earlier, but her mother fell ill and died in February. “I promised my mother that I would get sworn into the Supreme Court bar before I turned 50, and I made it by five days,” said Conners with a bittersweet smile.

Stephens, holding Sutton’s arm, led the group into the supreme Court chambers. As the clock struck 10 a.m., the gavel banged, everyone stood, the marshal called “Oyez, oyez, oyez,” and the justices emerged from behind massive red curtains. They announced five decisions—but not Bilski, to Sutton’s disappointment.

And then came the big moment. Pfaltz—who had carefully rehearsed the pronunciation of each attorney’s last name—stepped forward to address the court and called on each member of his group to rise. Pfaltz declared that he was “convinced that each possesses the necessary character and qualifications” to practice before the court. Chief Justice John G. Roberts Jr. admitted the motion and welcomed them to the bar, the clerk administered their oath, and the gavel banged once more, signaling the end of the session.

Now members of the Supreme Court bar, the lawyers returned to the West Conference Room, where Justices Samuel A. Alito Jr. and Sonia Sotomayor sauntered in to personally congratulate each of them.

Alito followed Supreme Court form, according to Bott, one of the Balti more lawyers. He seemed a little shy, said Bott, “until we mentioned we were ERISA lawyers. Then he came alive.” Alito even joked with Stephens’ young grandson, asking with feigned incredulity, “You’re admitted to the bar?”

Sotomayor was equally gracious, stating several times, “I love this ceremony; it’s so special.” She was not about to get any argument from the lawyers in the room.

Information on the 2011 trip will be posted in February at abanet.org/srlawyers, the Senior Lawyers Division page of the ABA website.