The organizers and performers behind the first “Theater of Law” production. Photo by Bruce Gilbert

On a Wednesday evening in June, 150 Schulte Roth & Zabel employees and four award-winning thespians packed a Manhattan conference room for a standing-room only event: a performance of Aeschylus’ ancient Greek tragedy The Eumenides.

The premiere of Theater of Law, an innovative dramatic project, was underwritten by SRZ and co-produced by Theater of War Productions and the New York University School of Law’s Forum on Law, Culture & Society.

“Theater of Law serves as a catalyst for what we hope will discuss ethical challenges of the legal system,” said FOLCS board member and SRZ partner Jeffrey A. Lenobel. “We want the play to make us think about our work … and how we deliver justice for our clients.”

As the evening began, FOLCS director Thane Rosenbaum joked: “Is this the coolest law firm in the city, or what? Everyone else is briefing cases.” The room erupted with laughter.

After a passionate 30-minute performance that took both actors and audience on a journey from laughter to rage, Theater of Law director Bryan Doerries facilitated a four-person panel and audience discussion.

“What did you recognize in spite of the distance of time and culture that spoke to your own experiences?” asked Doerries, who is also artistic director for Theater of War Productions.

Voice by voice, a chorus emerged: the importance of status and authority with regard to prosecution, the O.J. Simpson and Bill Cosby trials, the Furies with a “lust for vengeance” when they felt deceived by the play’s outcome, the riot that ensued after the police were acquitted in the Rodney King trial versus reconciliation in the wake of the Rwandan genocide.

“The Furies’ repetition of ‘We are wretched, we are overcome with rage, we cry out with grief, and where is justice?’ couldn’t possibly resonate more than it does right now,” said one panelist, an IT technician (Lenobel asked that some participants remain anonymous). The performance left him shaken, and he shared how recently, while watching a Daily Show clip about the Philando Castile trial, he found himself like the Furies. “I felt like crying with grief again and again. … Justice couldn’t mean more than it does right now.”

A lawyer in the audience referenced the same sequence. “The emotional reality of this from 2,500 years ago was the same,” he said, “from the prosecution side to the defense side.”

A librarian shared her outrage over the part of the performance where a character noted a woman’s death is less important than a man’s. “Tweny-five hundred years ago, and how much has changed?” she asked. “Once that was out there, I was the Furies.”

Theater of Law intends to interrupt emotionally detached industries by offering professional audiences a cathartic way to collectively confront the feelings that underlie their work. The organizers hope the project will travel nationwide to lawyers, prosecutors, advocates and law students. (For upcoming performance information or to host a Theater of Law performance, contact FOLCS producer Katie Yee, [email protected].)

“We want to give people the opportunity that Athena gave the ancient Greeks in this play,” Rosenbaum said, “allowing courtrooms to be a place where justice can hold your anger, hold your rage. Our legal system doesn’t allow for that.”

The script, which Doerries translated, read as a love letter to the legal system, and the discussion bridged the ancient and contemporary worlds.

“It’s always been my belief that lawyers are either actors or writers,” one audience member said. “It is hand in hand—the law and theater. ... The best trial lawyer is putting on a show. And I don’t mean in a Broadway sense; I mean it’s a life or death show sometimes.” 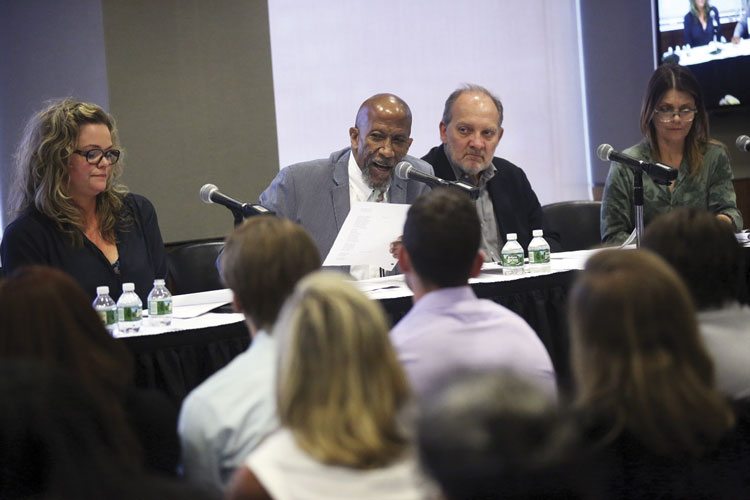 This article appeared in the September 2017 issue of the ABA Journal with the headline “Law Firm Hosts an Evening of Art Imitating Life: Antiquity meets modernity in the Theater of Law.”