These judges are partners in life and on the bench 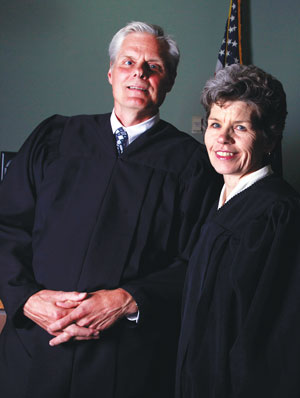 Like many two-lawyer couples, Jane Wipf Pfeifle and Craig Pfeifle have pondered the law since they shared law school assignments and late-night pizza while attending the University of South Dakota School of Law.

But unlike other two-lawyer couples, they have a unique position: They are (we believe) the only husband and wife sitting on the same bench in the same circuit appointed by the same governor in the same state.

In July, Jane was sworn in as a judge in the Seventh Judicial Circuit in South Dakota—the same court and circuit where her husband began serving in 2012, both having been appointed by Gov. Dennis Daugaard. Craig is now the circuit’s presiding judge.

Working together is not a new experience for the couple. They practiced together at the Rapid City firm Lynn, Jackson, Shultz & Lebrun. Craig handled insurance defense cases, while Jane practiced employment law and education law. Both felt loyalty to and affinity for the firm, but saw becoming a judge as public service, particularly as their four children were past the soccer game and day care stages.

“I considered it on and off for a while,” Craig says. “One of my best friends from law school is a trial court judge and he not so quietly encouraged me to consider the public service side of things.”

For Jane, the pace of being a judge is notably different. “In private practice, you are always moving things along. Here you are waiting for things to come to you; you do not take steps to move the ball down the field,” she says, adding that she is humbled by the types of decisions she makes, particularly as they relate to child custody.

When Jane took the bench, she started using her full name to aid those in the courthouse for phone calls and other communications. Both judges happen to have administrative assistants named Julie, so they’re not beyond some fun “Who’s on first”-style confusion in the office.

While the couple often have lunch together and talk about their day on a post-dinner walk, at the courthouse they refer to each other by their honorary titles. Jane concedes that judicial attire adds an air of formality: “When you see each other in robes, that feels different.”

This article originally appeared in the November 2015 issue of the ABA Journal with this headline: “Benched: This couple are partners in life and on the bench.”