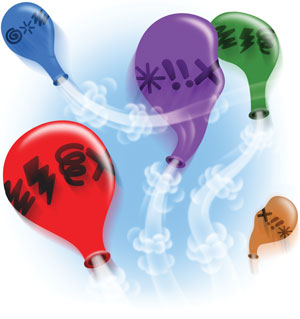 In this most disputatious of eras, maybe it’s time to look at the subject of derogatory words. Some see anger at their use as political correctness; others see acceptance of them as abusive and insulting. And then there are those who take those insults and embrace them.

While it seems counterintuitive to intentionally provide a forum for disparagement—racial or otherwise—that’s exactly what happened with two lawsuits that took an in-your-face attitude in regard to their respective slurs.

Simon Tam, aka Simon Young, founded a band in Portland, Oregon, in 2006. The band members labeled their music “Chinatown dance rock.” In a 2013 interview with Time, Tam said that even before starting his all-Asian-American band, he wanted to “address some underlying issues with racism.” So, thumbing his nose at a common Asian stereotype, Tam chose a deliberately provocative name: The Slants. And just in case that was a bit too subtle, the first album was titled Slanted Eyes, Slanted Hearts.

The group would like to trademark its name but has twice been rejected by the U.S. Patent and Trademark Office, which deemed it disparaging to Asians. The U.S. Court of Appeals for the Federal Circuit upheld the rejection in April but vacated the decision so the appeal could be reheard on First Amendment grounds.

After an October hearing on the appeal, Tam told Al Jazeera America: “We can either choose to perpetuate negative connotations of a word, or we can reappropriate it and reclaim it and develop something that’s a positive association instead.”

The PTO’s rejection of the Slants as offensive and disparaging is a bit of a head scratcher in light of the fact that the agency has approved the following trademarks: News Whore™ (podcast), Little Indian Giver™ (health education services) and Dago Swagg™ (apparel).

(Editor’s note: On Dec. 22, the U.S. Court of Appeals for the Federal Circuit ruled for Simon Tam, founder of the Slants. “The First Amendment protects even hurtful speech,” wrote Judge Kimberly A. Moore in the court’s opinion. “The government cannot refuse to register disparaging marks because it disapproves of the expressive messages conveyed by the marks.”)

Meanwhile, another take-back-the-slur effort—this one in Greenfield, Indiana, about 25 miles east of Indianapolis—made it all the way to the state’s supreme court.

Police officer Rodney Vawter had a license plate on his car since 2010 that carried a message to all those who refer to cops as pigs (which seems like such a ’60s or ’70s thing to do). His plate contained one word: 0INK, with a zero instead of an “O.” In 2013, his application for license renewal was denied.

A lawsuit filed against the commissioner of the Indiana Bureau of Motor Vehicles in May 2013 in Marion County Superior Court refers to the plate as “a humorous comment on the verbal abuse that has frequently been directed towards him in his career as a law enforcement officer, and also as an ironic statement of pride in his profession.”

In other words, like the Slants, Vawter is trying to own the slur and take the bite out of it, rendering it ineffective. However, despite the help of the American Civil Liberties Union of Indiana, Vawter lost his case before the state supreme court in a Nov. 6 ruling. Who gets to use what words in what way is a dispute as old as language. Will there ever be resolution? Who can say?

This article originally appeared in the January 2016 issue of the ABA Journal with this headline: “Sticks and Stones … These plaintiffs argue derogatory words can’t hurt them.”