They Grow Up So Fast: Parents Write Script, Expect Kids and Courts to Make It Happen 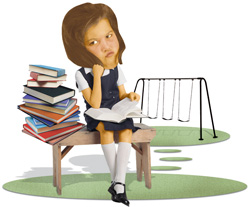 Be it sports or spelling bees, some parents don’t seem able to even fathom the possibility that their precious snowflake isn’t better than the other kids at just about everything.

Such a mindset leads them to place their future Einsteins on the treadmill to success, all the while ratcheting up the speed and incline. And why wait till they start school?

New Yorker Nicole Imprescia figured that age 3 was the right time to start her daughter, Lucia, on the hamster wheel.

In the fall of 2009—with an eye toward admission to an Ivy League college—Imprescia enrolled the tot at the tony York Avenue Preschool in Manhattan. After all, she couldn’t allow little Lucia to enter kindergarten without any art, music, language and math cred, could she?

Imprescia expected her daughter to be prepped for an exam necessary for entrance to elite private elementary schools, but eventually decided the preschool was just too déclassé.

In a lawsuit filed in the New York State Supreme Court in March, Imprescia claims her daughter, “as well as the sons and daughters of the other parents, were dumped amongst each other, notwithstanding their age differences.”

The suit also states that Lucia, at the age of 4, was still being taught shapes and colors, and on one occasion was “dumped with 2-year-olds.”

So, is Lucia actually a Harvard-caliber student who was not being allowed to blossom at the preschool? Who knows? But considering what Mom has already spent on her education, she darn well better know those shapes and colors.

There’s plenty of parent vs. school legal precedent. Disgruntled parents will haul an entire school district into court if they feel their progeny have had a less-than-perfect experience within the hallowed halls.

Think your kid is riding the bench while less-talented kids get all the playing time? Welcome to the human race. But how do you handle it? Do you: a) Work with your child to improve his/her skills? b) Have a calm chat with the coach? c) Sue?

A Pen Argyl, Pa., father chose option “c.” William Blasi sued the local school district, charging discrimination based on his contention that his middle-school sons—who are half-Caucasian and half-Chinese—got little playing time on their basketball team because “the district puts big, fat, obese white kids and white, short weaklings on the basketball court, and they didn’t play my kids.”

Blasi had requested, among other things, rosters of classes taught by the basketball coach, and the names and addresses of all parents with children attending school in the district. He was seeking “support to overthrow the school board.”

Those two requests were denied, and a court upheld the denial.

As long as parents try to live vicariously through their children—perhaps to fill underachieving gaps in their own lives—these types of lawsuits will exist. But the question is, what does it teach the kids?