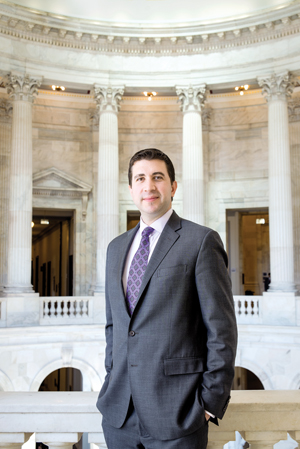 On Nov. 5, 1942, a young Jewish man named Leo Bretholz was herded into a French state-owned railway car bound for Auschwitz. Between 1942 and 1944, the Société Nationale des Chemins de fer Français transported approximately 76,000 Jews and "undesirables" to Nazi death camps. Fewer than 3 percent survived. Bretholz was lucky: He and a friend pried open bars covering their cattle car's small window and jumped. Some 60 years later, while Bretholz was living in Maryland, he learned SNCF was bidding on commuter rail deals in his state. He didn't oppose the deals. He wanted the railway to acknowledge its wartime guilt. Last December—after more than a decade of legal, legislative and diplomatic maneuvering—the French government approved a $60 million fund to compensate victims, survivors and heirs.


Helping to make it all happen was another young Jewish man, Akin Gump partner Raphael Prober.

Q. What was your role in this matter?

A. I oversaw the efforts of more than 50 lawyers and lobbyists in several states, ensuring that every front—state and federal advocacy, negotiations and communications with the State Department, public relations, grassroots outreach, litigation—moved forward in concert toward the ultimate objective of providing reparations and some manner of justice to the survivors and their families.

Q. How did you get involved?

A. Shortly after I joined the firm in 2008, the partner who recruited me and was my mentor asked me to spearhead this representation. He quickly realized how interested I was in the subject and how phenomenal an experience it would be given the skills that were required.

Q. Was your interest in part because you have family members who were murdered during the Holocaust?

A. Yes. My grandfather was from Lithuania—he left for the United States before the outbreak of the war, but soon after the war started, his entire family was exterminated with the exception of his youngest sister, my great aunt. She managed to survive and made her way to the United States and found him because she had remembered his address from the correspondence he had maintained with their parents.

Q. Are they still alive? Do they know what you helped to accomplish?

A. My great-aunt is still alive; she's in her early 90s. It's obviously a very hard thing to talk about for anyone who went through it, but she has been very happy to see that there is still progress being made, that there's still accountability.

Q. Did you get to meet any of the SNCF survivors?

A. I did. I became close to a number of them, including Leo Bretholz. He was truly one of the most re-markable men I have ever and will ever have the honor of knowing. Unfortunately, Leo passed away before the settlement was finalized, but this never would have happened without his tremendous efforts and his refusal to give up.

Q. Did you feel like you had to win—like you couldn't let them down?

A. I felt a tremendous, sometimes overwhelming, sense of responsibility. These survivors suffered in such incomprehensible ways and were denied justice for so long, and they deserved it so richly.

Q. You must have had a significant workload in addition to the SNCF case, considering your area of expertise—congressional and corporate investigations—and the fact that you joined the firm just in time for the 2008 financial collapse.

A. It was just unfolding as I got here, and I was quickly in the middle of investigations and representing companies and institutions like Countrywide, the former CEO of AIG ... and a number of prominent hedge funds. There was no shortage of work—it was like drinking from a fire hose.

Q. How did you juggle it all?

A. It certainly presented challenges at times, but this was a firmwide undertaking. Given Akin Gump's tremendous commitment to pro bono and to this case, there were scores of people pitching in when needed. And I have a very understanding wife.

Q. What happens next in the SNCF case?

A. Once the money is approved and appropriated in France, it will be administered by the U.S. State Department based on the eligibility requirements of the agreement. My hope is that it will move along as speedily as possible, given the age of many of the survivors.

Q. And what's next for you, pro bono-wise?

A. We just started working with the Washington Nationals Youth Baseball Academy, helping with general organizational and governance issues. I am committed to keeping pro bono a part of my career; and as a big baseball fan, I am especially excited about this recent engagement.


This article originally appeared in the April 2015 issue of the ABA Journal with this headline: "Held Accountable: This D.C. lawyer coordinated a massive pro bono effort on behalf of Holocaust victims."

Regarding “10 Questions: Held Accountable,” April, page 11, about the pro bono effort on behalf of Holocaust victims, survivors and heirs that secured a $60 million fund from the French government: Stephen Rodd and Harriet Tamen first filed suit in the matter in 2000, and they are continuing litigation to hold the railway company accountable.