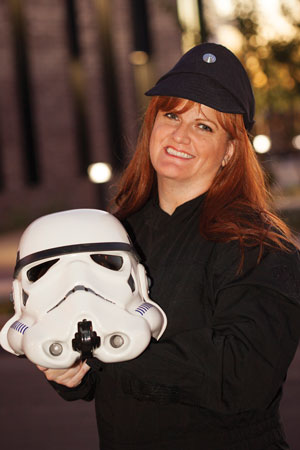 For some people, Star Wars isn't just a movie, it's also a way of life. Jennifer LaFortune is one of those people. Since 2006, the Gilbert, Arizona, lawyer has been dressing up, or "cosplaying," as a Stormtrooper—Imperial Officer TK 7047, to be exact—to attend sci-fi conventions, march in parades and serve the community, all through her membership in an international costuming organization for Star Wars bad guys called the 501st Legion. She's used her interstellar skills to help the group grow and adapt.

A. I have—ever since the first movie came out when I was in grade school. The DJ played the Star Wars theme song at my wedding.

Q. When did you get started with costuming?

A. It was 2005, and I had been to [the international Star Wars convention called] Celebration II and was planning to go to Celebration III. At the time, it was supposed to be the last Celebration, so I said, ‘All right, I am going to go in costume.’ I decided to be Mara Jade, from the Star Wars expanded universe, because she also has red hair.

A. The 501st is a service organization—they raise money for charities, they visit sick kids in the hospital—so I thought it would be a great way to focus my good intentions. The legion is the weirdest and most charming group ever. There’s an acceptance and a worldwide camaraderie like nothing you’ve ever experienced, and it’s all founded on being a geek.

Q. What are some of the things you’ve done for the Phoenix chapter of the 501st?

A. I’ve been able to help chapters and members understand how intellectual property law works; and once I got my LLM in e-commerce and technology, I was able to further reinforce those issues. I’ve also worked on the charter review committee, and I am helping to revise our international rule structure. We have to make sure that the rules work in different states and in places like Singapore and Germany, and that everyone consents and complies. Sometimes it’s like herding cats: Our members like to argue online, and some of these guys weren’t the most socially adept in high school, but you have to evolve when you have 8,000 members all over the world.

Q. How did you become the force behind the founding of the Republic Service Organization, a Star Wars costuming group for women that’s like a stylized USO of the 1940s?

A. I had been a part of several panels about female costumes and Star Wars, and up until a few years ago, it was difficult to find a female costume that wasn’t highly sexualized. I don’t blame George Lucas for putting Carrie Fisher in a metal bikini, but if women only have a choice between that and armor, chances are they’re going to stay home. I wanted to find a way to get them involved to keep the family together, costuming together, so we created our own group where women can dress like pin-up girls, with black pencil skirts and flowers in their hair. We started in 2007 and now have women in 12 states and in eight or 10 countries.

Q. It’s got to be good for young girls to see you and know that they can be Stormtroopers, too, right?

A. Oh, I’ve had parents come up to me and say, ‘You made my daughter feel so much better about the fact that she doesn’t like My Little Pony.’ It’s OK to want to wear armor. We’re here to say to geek girls: ‘Your people are here, and we want to hang out with you, so bring it!”

Q. When did you decide to become a Stormtrooper?

A. As soon as I got into the 501st, I decided I needed Stormtrooper armor. I wanted to hang out with Darth Vader.

Q. Is there an arrangement with Lucasfilm to allow you all to make and wear the costumes?

A. We started creating the framework for what we’re allowed to do, IP-wise, around the time Revenge of the Sith came out. Because it’s all trademarked, our costumes have to represent the brand, and everything has to be family-friendly.

A. The relationship has changed a bit, but they understand what we’re doing. Disney could easily crank out uniforms and pay people to be in them, but they continue to work with us. They know that we do good things, and that we advance and protect the brand.

Q. Do you have a favorite Stormtrooper experience?

A. In 2007, George Lucas was invited to be the grand marshal of the Rose Bowl Parade. He said, ‘If I am going to go up Colorado Avenue, I want 200 Stormtroopers with me.’ So Lucasfilm invited 501st members worldwide to come to California. They put us up for three days and taught us how to march. It was the greatest thing ever.

This article originally appeared in the December 2015 issue of the ABA Journal with this headline: “Super Trooper: This lawyer is using her love for Star Wars to expand the galaxy of geeks.”