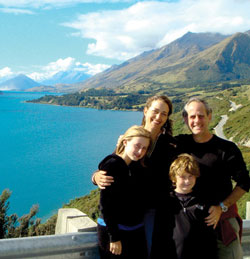 In 2009, San Francisco attorney Morgan Smith set off on a 10-month sabbatical journey around the world, his wife and two kids in tow. The Smiths stopped in 83 places on five continents, but a hotel in Florence, Italy, stands out.

That’s where Smith made the decision to pursue a new career path after 17 years in litigation.

“There I was, talking to my kids about how this plaza was built in 1492 and the Christopher Columbus connection, and I just knew that it was time,” Smith recalls. “At that point I had spent enough time away to find the guts to go ahead and try something different.”

Long a staple of academia, sabbaticals aren’t just for teachers anymore. The career break movement is taking root in other professions, including the law. And attorneys like Smith are using extended breaks to reassess their plans.

“I think it’s because the job is just so demanding,” says Sherry Ott, co-founder of Meet, Plan, Go, an organization that supports professionals considering time away. Ott says many midcareer attorneys seek her advice, often lamenting the work-life challenges inherent in the law.

“It’s usually someone who doesn’t make partner—or realizes that he doesn’t want to make partner—and is trying to decide what’s next,” Ott says.

Ott notes numerous benefits for sabbatical takers, from “time away to think” to the chance to acquire new language and negotiation skills. She distinguishes sabbaticals, which imply a return after a preplanned time away, from career breaks that are typically more permanent.

Former New York City attorney Jodi Ettenberg, 32, has added several new resumé lines in the three years she’s spent on her career break traveling the world. Ettenberg saved aggressively during her five years as a corporate lawyer to fund her current adventures in South America, South Africa, Russia and China. Now she hopes to make use of her newfound writing and photography skills as she considers new opportunities in law.

“For me it’s less about taking time away from the law and more about doing what you love,” says Ettenberg, who highlights lawyers’ career breaks in a special “Thrillable Hours” feature on her website, Legal Nomads.

The economic downturn is responsible, in part, for the sabbatical trend. With companies needing fewer employees and workers looking for new directions, the sabbatical has become a win-win, Ott says. But she believes a generational shift is also at play.

“Generation Y has realized that there will be no security in retirement, and they want to enjoy life now,” says Ott, who ditched her own 14-year corporate career for the chance to support herself through travel, photography and social media.

That’s not to say it’s a decision to be taken lightly. For Minneapolis attorney Amy Schroeder Ireland, 37, the decision to take a career break was the hardest choice she’s ever made.

Ireland never wanted to be an at-home mom, and she managed to keep her legal career afloat until her third child was born. But with kids trading sicknesses week after week and a husband who didn’t have much flexibility in his job as a county judge, Ireland decided that something had to give.

“The benefits have come,” says Ireland, who is preparing for a career in academia while on an extended career break at home. “Our family life is just a lot more calm. I can go to bed at night instead of staying up until midnight or working all weekend.”

San Francisco attorney Smith agrees that families can reap big benefits from sabbaticals; he considers the closeness and focused time spent together on the road with his family to be irreplaceable gifts. But the most important part of the journey, Smith says, was the chance to step away from the law for long enough to imagine something that wasn’t so “all- inclusive.”

The sabbatical journey provided Smith with the spark he needed to launch Cogent Legal, a litigation graphics and consulting firm that develops visual presentations for attorneys.

“That year away was the best year of my life and probably always will be,” Smith says. “I can’t imagine another year that would be more special or meaningful.”