Tipping the balance of justice 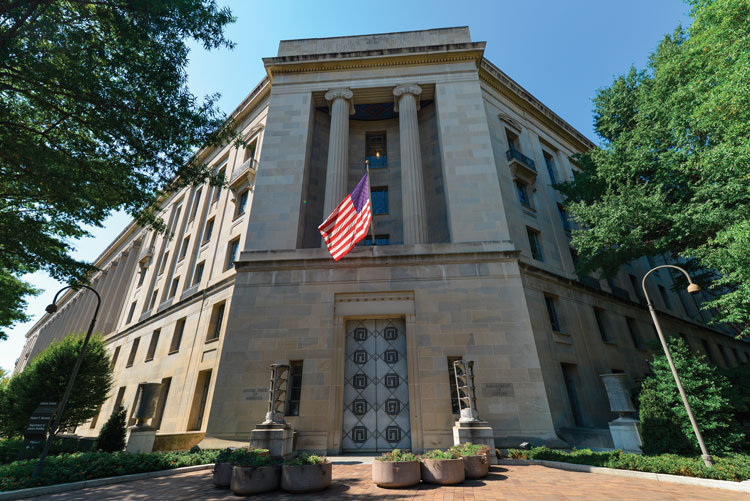 The Department of Justice building in Washington, D.C. Shutterstock

While President Donald Trump’s brash style and bold actions in dealing with the other branches of government have made the study of the separation of powers popular again, the greater concern is a more subtle balance of powers within the executive branch—the level of independence accorded the Department of Justice.

The DOJ must be politically accountable, but it also should be free from political pressure in certain matters, particularly criminal investigations.

These strains were laid bare as the White House has at times bullied the attorney general, the FBI director, who was fired, his successor and others at the top of that agency and the DOJ, seeking to halt an investigation of contacts between the Trump campaign and representatives of the Russian government.

“At least since Watergate, practices and policies have recognized it as almost sacrosanct to have appropriate limits on communications between the White House and DOJ,” says Randall Samborn, a former assistant U.S. attorney in Chicago. Samborn was spokesman for U.S. Attorney Patrick Fitzgerald when he was a special counsel investigating possible White House involvement in a leak identifying a covert CIA operative during President George W. Bush’s term.

“But they’ve been breached at times, as seen in recent battles over the level of independence for DOJ in handling politically tinged criminal investigations that reach into the White House itself,” Samborn says. “Nothing less than preserving the rule of law is at stake.”

See cover story: The executive branch pushes the boundaries of the separation of powers

While the DOJ doesn’t have any constitutional claim to independence from the president, there are norms and practices to prevent federal law enforcement from being a tool for the president’s personal or partisan use. Some of these have been set through memoranda by post-Watergate attorneys general seeking to keep the department “impartial and insulated from political influence,” as the most recent iteration, by Attorney General Eric Holder in 2009, put it.

In 1993, just three people at the top of the DOJ and four in the White House could be involved in initial contacts about investigations. Attorneys general John Ashcroft and Alberto Gonzales in the Bush administration raised those numbers dramatically, ultimately to 895 in the White House and 42 at DOJ for discussing matters that didn’t involve national security.

That combined with politicized hiring at the main DOJ led to scandal when eight U.S. attorneys were fired in 2007. Among the allegations, they had failed to follow directives to pursue voter-fraud cases or refused to prosecute certain Democrats and pull back from the same with some Republicans.

One of those fired, Paul Charlton, who was the U.S. attorney for Arizona, was targeted mainly for seeking reconsideration of his decision not to pursue the death penalty in a case in which he believed the evidence was too weak for it. Ashcroft and Gonzales had been pushing for more capital cases.

“So long as we have career men and women in the Department of Justice to temper the natural instincts of the political appointees to pursue factional purposes, then I think the department will function correctly,” says Charlton.

Long before today’s controversies, Charlton was passing along to others a quote from John Boyd, a famed Air Force fighter pilot and later a military strategist: “If your boss demands loyalty, give him integrity. But if he demands integrity, give him loyalty.”