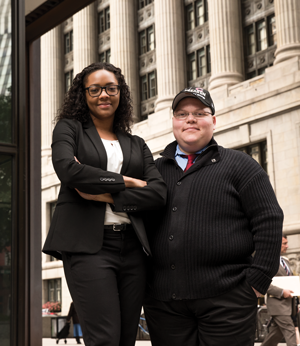 On a chilly October morning, a 24-year-old man stands outside Chicago’s Richard J. Daley Center, pulls out his black Rawlings baseball glove and punches it a few times. This talisman, as beloved as his Chicago Cubs, was a Passover gift in 2002. He was just 10 years old then, but he wrote on it a nickname he always thought reflected his true self—Hans B.

Assigned female at birth, Hans was given a different name—a female name—by his Orthodox Jewish parents, who were part of a community that traditionally segregates children by gender during school and prayer services. Hans knew at age 3 that he was male but waited until last year to live as a man, coming out to his family, community and the world. He had begun testosterone treatments three months earlier. Still, there was much work to do.

Today, he will stand before a judge with Brittany Morgan-Glenn, a third-year student at the John Marshall Law School, and Kelly Burden Lindstrom, supervising adjunct professor and staff attorney, at his side. By the end of the day, Hans will be his legal name and his gender marker will be male, allowing him to travel, bank and find work more easily.

Lacking proper identification that matches a person’s name and gender marker is impractical, says Lindstrom. “You can’t get a job because you don’t present what your gender marker says on your driver’s license. Or you’ve gotten the offer, but wait: You don’t look like Joe Smith.”

“Every time I pull out an ID that doesn’t match my identity, I have to out myself,” Hans says. “That means I put myself in a compromised position, and my safety is at stake.” (To protect his privacy, Hans asked that his last name and the name he was given at birth not be revealed.)

Hans’ fears of being outed and for his safety are real for him and the 1.4 million American adults who identify as transgender, according to the Williams Institute at the UCLA School of Law. In 2011, a survey by the National Center for Transgender Equality and the National LGBTQ Task Force found about 90 percent of trans people experience harassment, mistreatment or discrimination at work. And 78 percent of K-12 students reported harassment, 35 percent physical assault and 12 percent sexual violence. The stressors are so high that 41 percent of transgender and gender nonconforming people attempted suicide, the study found. At press time, the center was finishing work on a follow-up, the U.S. Trans Survey, scheduled for release on Dec. 8, 2016.

Fewer than 60 percent of transgender and gender nonconforming people have updated the gender marker on their driver’s licenses or state identification cards, while only 26 percent have updated their passports, reports John Marshall.

Changing gender markers on birth certificates is another matter. Illinois and many other states require a court order to change or amend them, a letter from a surgeon certifying gender reassignment surgery or both, according to Lambda Legal, an organization that advocates for LGBT rights. California, the District of Columbia, Iowa, New York, Oregon, Vermont and Washington have removed surgical requirements. And Tennessee is the only state that specifically forbids the correction of gender designations on birth certificates of transgender people.

“One of the most valuable skills as an attorney is the ability to listen. It’s one of the things they don’t teach you at law school,” says Kylie Byron, an associate at Seyfarth Shaw in Chicago. Byron, who wrote the ID document instructions in the current edition of the Guide to Name and Gender Marker Changes for Illinois, has lectured the class about the challenges facing the trans community.

“The client at the clinic will not have a whole lot in common—economically, socially—with the law student. But the primary job of the student lawyer is to listen and identify a set of needs that they themselves have never had.”

“It is offering emotional support as well,” says Morgan-Glenn, who walked through the process with Hans. “The client knows someone is there advocating for you, and you don’t have to go through this alone.”

In Illinois, the legal process for name and gender marker change usually takes about six to eight weeks, a time frame that fits in one 16-week semester.

Typically, a potential client calls the clinic through a referral, and a student takes down initial information. Then they check to make sure the petitioner has no felony charges during the past 10 years, was never convicted of fraud or identity theft, and is not a sex offender.

After filling out the paperwork, the student meets with the client during a 20-minute intake session. Then they go to court to file a petition for a name change and fee waivers. “For transgender people to get [the paperwork] done on their own, with the language of the forms and where you do filing, it can be overwhelming,” Morgan-Glenn says. “It’s emotional for them.”

Next, petitioners must publish notice of their intent to change their name and the court date in a general circulation newspaper, typically the Chicago Daily Law Bulletin, for three weeks.

On the appointed court date, the law student and a licensed attorney accompany their client to the five-minute hearing. The judge checks the client’s state identification, certificate of publication, birth certificate, passport and other documents before approving the name change.

The client’s gender marker is changed at the Office of the Secretary of State on a new driver’s license or state ID. The Illinois Department of Motor Vehicles requires clients to have medical documentation stating they are undergoing transition; however, unlike other states, Illinois’ DMV does not require individuals to have gender reassignment surgery.

There are robust LGBT-oriented clinics at other schools too. Brooklyn Law School’s LGBT Advocacy Clinic opened in 2016. Students handle family law, immigration, civil rights and other matters. “There are more people who are comfortable about identifying as transgender, and their issues are becoming more visible, meaning there are more calls for attorneys,” says Susan Hazeldean, an assistant professor of law and the founder of the clinic.

Students take a two-hour class surveying LGBT legal issues, then work with the community one day a week through the Volunteer Lawyers Project of Onondaga County, located in Syracuse, New York.

“There is a huge demand. We get one or two calls a week for gender and name change issues,” Curran says.

After Hans’ successful hearing, he’s beaming with a huge smile and an official new name. “It’s a huge moment, the biggest moment of my life so far,” he says. “Transition is the best thing that ever happened to me,” Hans adds. “I want others to feel like I do right now—to feel the world is a safe place, and they can come out and transition.”

This article originally appeared in the January 2017 issue of the ABA Journal with this headline: "Naming Rights: Law students offer free legal services to help transgender people navigate the complexities of changing their names."