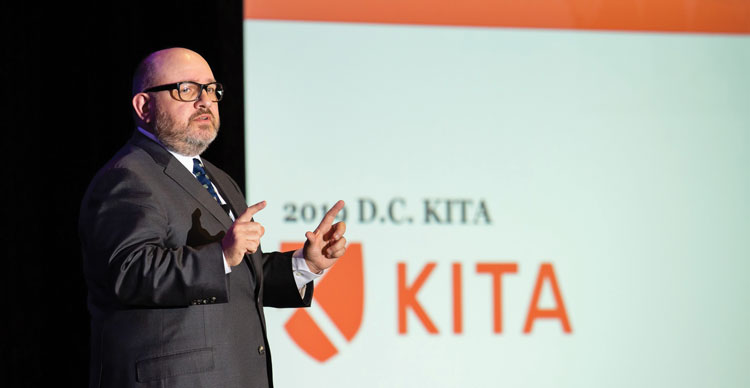 At this point, it’s a given that junior associates at big firms will struggle for actual court time. Cases rarely go to trial anymore, while clients frequently demand experienced attorneys in court for the cases that do go forward. For junior litigators, most of their exposure to trial work comes in the form of doing research, writing briefs and conducting e-discovery.

For first-year associates, KITA offers direct- and cross-examination drills. In the years that follow, associates get to do mock bench and jury trials, sometimes with multiple parties. One mock trial takes place in Chicago and another in Washington, D.C. Both are a week long.

Associates are expected to behave as if they were involved in a real trial and not a mock one. “Part of what we discuss with associates is taking the time to both prepare their witnesses adequately for their testimony, as one would at a real trial, and make a personal connection with them so that they can best communicate in the courtroom,” says James F.  Basile, the Kirkland partner in charge of the KITA program.

Kirkland states that it has a trial-ready philosophy, and its lawyers have opportunities to appear in court earlier in their careers than they would at other firms.

The law firm had $3.76 billion in 2018 revenues, making it the biggest U.S. law firm by gross revenue, according to the Am Law 100 rankings. Its work over the years has included representation of BP in the Deepwater Horizon oil spill, Volkswagen during its emissions scandal and several transgender soldiers challenging the Trump administration’s ban on allowing them to serve in the military.

“Rather than a young associate getting training on the client’s dime, they get it at the firm’s expense,” Basile says. He would not say how much the program costs, but disclosed that the Chicago and D.C. programs take up more than 9,000 hours in attorney time and include 90 partners, who besides serving as judges provide training and performance critiques.

“People’s experience with KITA is that things will go wrong, but the nice thing is that nobody is going to lose any money when things go wrong,” says Basile, who has handled litigation matters for clients including Facebook, JPMorgan Chase, Discover Financial and 24 Hour Fitness.

According to Basile, it’s possible to replicate surprises that can come up in real trials.

“Just like with regular judges, you never know how things will come out. Also, just like in the real world, witnesses vary on how effective they are, and you don’t know the strategy your opponent will take,” he says.

When asked why the firm just didn’t send its associates to trial skills programs offered by the National Institute of Trial Advocacy, Basile replied that in the 1970s, many Kirkland partners were among the first group of trial lawyers recruited to participate in NITA, and they thought that bringing a similar program in-house made a lot of sense. The KITA program has been offered for 41 years.

In terms of who gets to go to court at Kirkland, Basile says it’s the client’s choice, and he advocates for associates to be included.

“I wouldn’t recommend someone for something I don’t think they are ready to do. I’m a firm believer that learning by doing is the most effective way to do anything, and the KITA program is a way to learn through doing,” he says.

Marc Galanter, a University of Wisconsin-Madison law professor who wrote the oft-cited 2004 Journal of Empirical Legal Studies article about “vanishing trials,” says that 20 years ago, he would have been surprised that a firm like Kirkland & Ellis publicized a mock trial program rather than real court time. Today he thinks it makes sense, as there are so few federal trials. According to his research, 11.5% of federal civil cases were resolved by trial in 1962, and by 2002, that number dropped to 1.8%.

He says today less than 1% of federal civil lawsuits are resolved by trial.

“This creates an alternative way to have the experience of a jury trial, and maybe the sense of confidence for people, to negate that suggestion that it seems like kind of a weak substitute. I’m impressed they think it’s worth it to get this kind of experience,” Galanter says. He adds that the program could help Kirkland recruit law students as summer and first-year associates.

“It wouldn’t turn them off, and it gives the perception that the firm is interested in investing in them,” he says, adding that today, young lawyers working as public defenders, prosecutors, city attorneys or sole practitioners probably get the most trial time.

Current and potential clients would also be likely to view the Kirkland program favorably, says Deborah Farone, a consultant who has previously served as the chief marketing officer with both Cravath, Swaine & Moore and Debevoise & Plimpton.

“The client would want to know that the firm is investing in their associates and providing them with training. Also, the client ends up with a higher-caliber associate that’s actually had this mock trial training and gone through a serious curriculum,” Farone says.

Stephanie Biderman, a managing director with the legal recruiting firm Major, Lindsey & Africa, frequently works with young lawyers. In terms of job searches for lateral associates, she’s not sure how much weight employers would give to participation in the KITA program. But she thinks it is a great draw for young lawyers who Kirkland would like to hire as lateral associates.

“When junior associates are looking to make a move, oftentimes it’s because they don’t feel that their skills are developing the way they want, in terms of opportunities given,” Biderman says.