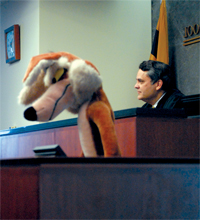 Law Professor Jonathan Turley is disheartened by the fact that surveys show many citizens can’t name the three branches of government or any of the basic liberties set forth in the Constitution. But he can’t suppress a smile every time he asks groups of sixth-graders to list what’s in the Bill of Rights.

For the last year, Turley—a constitutional law scholar at George Washington University—has been bringing groups of elementary school students to the law school for a kid-friendly civics lesson in the form of a full-blown trial of B.B. Wolf for the alleged murders of two of the three little pigs.

The mock trial series arose after educators heard Turley stressing the need for teaching civics at the elementary school level. “I believe a lot of corruption we see in Washington and in the financial market is due in part to the near-total absence of civics training for children at the elementary level,” he says. “We do very little to teach children about what it is to be a citizen and the obligations that come with that status.”

Though Turley is serious about his message, he makes sure the double-murder prosecution of B.B. Wolf is fun for the grade-schoolers.

Law students play various roles in the U.S. v. B.B. Wolf trial, and the elementary school students are the jury. Turley tweaks the trial process a bit, allowing the kids to make objections. 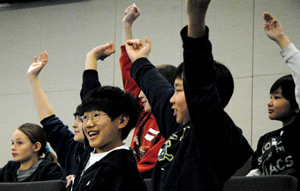 A group of second-graders last year found Wolf guilty, but the sixth-graders have consistently let him go. Perhaps they are convinced by the withering cross-examination of the remaining pig who is accused, among other things, of trying to curry favor with all pigs and “bring home the bacon.” Or maybe by Wolf’s testimony that when a door is locked a nor­­mal person would then go down the chimney.

Turley is not alone in his quest. He recently joined the board of Citizen­ship Counts—which also counts retired Justice Sandra Day O’Connor as a member—to help promote the mission.

While Turley is teaching his charges that there is more to life than the right to buy things on the Internet, which tends to come in at No. 2, he also confesses that the kids have taught him a thing or two. Who would have thought that sixth-graders would become interested in studying law because of the coolness of swivel chairs in the law school moot courtroom?

“Every year, that’s what most impresses them,” he says.

What Students Know About Civics