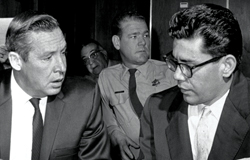 Just about every American can identify the Miranda rights; they are almost as familiar as the Pledge of Allegiance. But three U.S. Supreme Court decisions this term show that the court is continuing to slice off pieces of the famous 1966 criminal rights case, Miranda v. Arizona.

The high court ruled this term that a suspect’s request for a lawyer is good for only 14 days after release from custody, that police do not explicitly have to tell suspects they have a right to counsel during an interrogation, and that criminal suspects must unambiguously announce to police that they wish to remain silent.

“These three cases indicate the court is not going to expand Miranda an inch, and if they can construe it to cut back slightly, they will,” says Rory Little, a specialist in criminal and constitutional law at the University of California’s Hastings College of the Law in San Francisco.

Historically, Miranda warnings have served as a procedural safeguard, articulated by the Warren court “to secure the privilege against self-incrimination,” including the right to remain silent and the right to have counsel present during interrogations.

The court’s conservative majority has been outspoken about its distaste for the case, and in at least two Miranda cases argued during this past term, they’ve drawn broad support from the rest of the court. In the process, say many civil rights advocates, the Roberts court has subverted Miranda’s original intent.

“This term you had three Miranda cases. None of the cases comes out in favor of the defendant and in some sense that means they did not come out in favor of Miranda,” Little says.

In February the court decided Florida v. Powell and Maryland v. Shatzer within one day of each other. In Powell the defendant was convicted of being a felon in possession of a firearm and sentenced to 10 years in prison. Powell appealed his conviction, arguing the written form of the Miranda warning used by Tampa, Fla., police was invalid because it did not explicitly indicate that he had a right to have an attorney during questioning.

The court disagreed, holding 7-2 that while Miranda requires a suspect “be warned prior to any questioning” and “that he has the right to the presence of an attorney,” semantics aren’t the issue. What’s important, the court says, is whether the warning “reasonably” conveyed Miranda rights to a suspect.

“It’s unreasonable to expect that a rote recitation of Miranda rights translates into meaningful understanding of those rights,” says Chicago defense attorney Terence Campbell, a member of the National Association of Criminal Defense Lawyers. “Custodial interrogations are, by their nature, intended to be intimidating and stressful, which can lead to false or coerced statements.”

Shatzer involved the interrogation and subsequent confession of an incarcerated man for the sexual abuse of his 3-year-old child. Shatzer had been interrogated three years before for the same crime and at that time had invoked his right to remain silent. At trial, Shatzer moved to suppress his confession, arguing that his invocation of his Fifth Amendment right years before was still applicable.

With Justice Antonin Scalia writing the opinion, a unanimous court held against Shatzer, and further articulated the seemingly arbitrary rule that the appropriate period of time for a person to be re-acclimated to normal life, and consequently free from the pressures of investigative custody, was two weeks.

“On the facts, no one was going to vote for Shatzer,” Little says. “What’s disturbing is the broader implications of the decision. When Scalia writes, he writes broadly in ways that can affect future cases. On the broad writing on Miranda [this term], the majority goes too far.”

Berghuis v. Thompkins, the last Miranda case of the term, turned out to be the most contentious, as the more moderate justices took stock of the restrictions already implemented by the court.

Van Chester Thompkins was arrested for murder in 2001 and questioned by interrogators for three hours. Police read Thompkins his Miranda rights, but he refused to sign a form showing he understood those rights. Silent for most of the questioning, he was asked, “Do you pray to God to forgive you for shooting that boy down?” Thompkins said yes. He was convicted based on this one-word confession, and he appealed.

In a 5-4 decision, the court ruled suspects in custody must “unambiguously” invoke their right to remain silent by telling police they wish to do so. The court compared this to the requirement that suspects tell police they want a lawyer, laid out in the 1994 ruling Davis v. United States. There is no reason to treat these two rights differently, Justice Anthony M. Kennedy wrote for the majority.

In a strongly worded dissent, Justice Sonia Sotomayor said the majority decision “turns Miranda upside down,” pointing out that requiring criminal suspects to affirmatively invoke their right to remain silent “counterintuitively” requires them to speak. Sotomayor called the reasoning “a substantial retreat from the protection against compelled self-incrimination that Miranda v. Arizona has long provided during custodial interrogation.”

While this may be the first indication of Sotomayor’s bent in criminal procedure cases, court watchers caution against drawing conclusions from one dissent. Sotomayor, after all, is a former prosecutor, and although she disagreed in Thompkins, she sided with the conservative majority in both Powell and Shatzer.

Many prosecutors and police applaud the three decisions for injecting a strong dose of common sense into a rule they say has stymied investigations and set criminals free on a technicality.

“I think most prosecutors, when they encounter Miranda, it’s in the context of a defendant attempting to apply it in a way that will spare them the consequences of having made admissions of a crime,” says Richard Wintory, chief counsel for the Border Crimes Enforcement Section of the Arizona attorney general’s office.

Wintory has been a prosecutor for 26 years, has trained police officers and is a past vice president of the National Association of District Attorneys. He’s a proponent of strongly limiting Miranda to avoid “absurd or counterintuitive applications of the rule,” short of gutting it altogether.

“What I’m seeing that I think is unfortunate from people who know better, is the claim the court is sub silencio reversing or overruling Miranda,” Wintory says. “I think that does a great disservice to the rights of the accused, when it’s important for us to look for common ground on what these opinions mean.”

Wintory says that defense attorneys and law professors with an ax to grind against the Roberts court and the Bush administration aren’t being “intellectually honest” when they distort the meaning of the recent Miranda decisions.

Scalia, who wrote the opinion in Shatzer, has no love lost for Miranda. Scalia has referred to the right as a “prophylactic” measure that is not a constitutional rule itself. In a blistering dissent in Dickerson v. United States, Scalia called Miranda “judicial overreaching” and supported its repeal.

Even some liberals question the relevancy, and efficacy, of the 44-year-old decision. Criminal law experts point out that many defendants choose to talk to police even after being “Mirandized,” often with full understanding of their rights. Giovanna Shay, who writes and teaches about criminal law and the legal regimes regulating mass incarceration, says suspects who are going to talk to police will do so whether or not they are read their rights.

“Miranda is culturally significant,” says Shay of Western New England College School of Law. “But whether it keeps people from talking—that’s an empirical question that still raises doubt.”

Shay says it’s unlikely Miranda would be overruled, but she describes an erosion of domestic civil rights that has continued, even into the national security context.

This spring, the Obama administration announced it would seek a broad exception to Miranda in the form of a new law allowing investigators to interrogate terrorism suspects without informing them of their rights. This is an expansion of the public safety exception already articulated in New York v. Quarles (1984).

“The war on crime has made the war on terrorism possible,” says Shay, citing Georgetown University law professor James Forman. “We have been restricting civil liberties at home, particularly toward those of color,” Shay says, “and now we’re seeing the same methods in how we conduct our anti-terror investigations.”

And as Miranda limps along, battered but alive, experts are seeking other avenues to protect civil liberties, such as taping all police interrogations or allowing more in-court expert testimony on forced confessions and police coercion, says attorney Campbell.

“This is particularly important when you have a juvenile,” he says, “or someone whose psychological traits make them susceptible to manipulation or coercion by skilled interrogators.”

In the print and initial online version of the September Supreme Court Report, “Turning Miranda ‘Upside Down’?” Giovanna Shay of Western New England College School of Law should have been quoted as citing Georgetown University law professor James Forman when saying that “the war on crime has made the war on terrorism possible.”