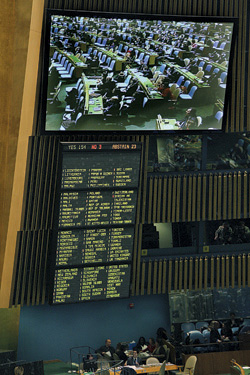 The Arms Trade Treaty—which passed easily at the U.N. General Assembly in April—faces Senate opposition due to concerns that it would restrict the rights of domestic gun owners. AP Photo/UN Photo, Devra Berkowitz.

Finding consensus on how to limit the global trade in conventional weapons has long eluded the nations of the world. After World War I, arms reduction was incorporated into the League of Nations charter, but like the league itself, the goal of limiting weapons was trampled in the march toward World War II. Over the years, there have been other limited agreements, including arms embargoes sponsored by the United Nations, but they have been largely ineffectual.

Now comes the Arms Trade Treaty, which proponents see as the best hope yet of stanching the worldwide proliferation of military weapons. When conflicts pop up in various parts of the world, the weapons used by combatants generally come from another country—like China, Russia or the United States, which is estimated to be the world’s largest weapons exporter but is also recognized for having one of the most stringent regulatory schemes of any nation.

Rather than impose one international regime to regulate the weapons trade, the treaty would require ratifying states to implement their own “effective and transparent” system for regulating transfers of military weapons. In doing so, states would have to assess whether arms sales would “contribute to or undermine peace and security,” and whether they would facilitate serious violations of international human rights laws. While the treaty contains no enforcement mechanism, states would be required to report annually on all their arms transfers to an implementation support unit maintained by the U.N.

The general assembly approved the Arms Trade Treaty by a vote of 154-3, with 23 abstentions. The treaty was opened for ratification June 3, and it will go into force after 50 countries have ratified it.

The United States was among the nations voting in favor of the treaty. “The ATT, by its terms, will help stem the illicit international arms trade and reduce the risk that international arms transfers will be used to commit atrocities without impeding legitimate arms trade, infringing on national sovereignty or being in any way inconsistent with the rights of U.S. citizens, including under the Second Amendment,” said the U.S. Department of State in a statement provided to the ABA Journal on May 17.

TROUBLE IN THE SENATE

But whether the U.S. formally ratifies the treaty will be determined by the Senate, where there is strong opposition fueled by concerns that the international agreement would restrict the Second Amendment rights of domestic gun owners. Even though the preamble to the treaty states that it is focused on international weapons sales rather than traditional domestic use of firearms, more than 50 senators already have signaled their opposition to the treaty. That is enough opposition to defeat ratification, which would require the votes of 67 senators to pass.

The National Rifle Association strongly opposes the treaty, saying it would lead to new laws and other limits on the rights of gun owners in the United States. One of the treaty provisions that concerns gun rights groups in the United States encourages nations ratifying the treaty to keep records on imported firearms, including “end users, as appropriate.” Opponents fear that the provision could lead the federal government to collect information about the owners of imported firearms.

Sen. Rand Paul, R-Ky., has called the treaty a “massive, global gun control scheme,” which would lead to tougher licensing requirements for law-abiding Americans and a ban on private ownership of semi-automatic weapons. Other critics say the treaty will be used by gun-control advocates to argue for measures such as universal background checks.

Thirty-six senators have signed a nonbinding resolution urging President Barack Obama not to sign the treaty. The resolution calls the treaty “vague, easily politicized and readily manipulated,” and says it risks infringing freedoms protected by the Second Amendment because it does not include an express acknowledgment of the right to bear arms.

But a white paper (PDF) produced by the ABA Center for Human Rights reaches a different conclusion, finding that “the proposed ATT is consistent with the Second Amendment, as that provision has been construed to date by the federal courts, including the Supreme Court, of the United States.”

The white paper, issued Feb. 26, asserts that the treaty “would not require new domestic regulations of firearms. Given that existing statutes regulating the import and export of such weapons have withstood constitutional scrutiny in the U.S. courts for decades, it is unlikely that the proposed treaty would compromise Second Amendment rights.”

The white paper was a response to outreach by a coalition of arms control groups that included several ABA members in their ranks, says Brittany Benowitz, chief counsel to the Human Rights Center. The center previously had issued a white paper on the U.S. arms export control regime.

The Second Amendment implications of the ATT were of particular interest to the center in conjunction with its atrocity prevention project and its business and human rights project. “The Arms Trade Treaty obviously has implications for both issues,” Benowitz says. “We therefore thought it was an appropriate issue for the center.” (The white paper does not constitute ABA policy because it was not submitted to the House of Delegates or Board of Governors for consideration.)

While the Second Amendment “protects ‘the right of the people to keep and bear arms,’ ” the white paper states, “it does not protect the right to supply arms to persons who are not themselves among ‘the people’ of the United States. In other words, the Second Amendment does not protect either a right to arm aliens abroad or a right for aliens to receive American weapons.”

Moreover, according to the white paper, the U.S. already has an effective regime for regulating weapons imports and exports that would meet the standards of the ATT. Further, the paper states, “since implementation of the treaty will be done by national governments, the determination that the regime is inadequate would have to be made by the executive branch and Congress. To the extent that new concerns arise that may require additional legislation, the language of the proposed ATT ensures that state parties have the discretion to address these concerns within the bounds of their own constitutional requirements.”

NOT PERFECT, BUT PROMISING

No one argues that the proposed Arms Trade Treaty offers a perfect solution to the problem. The broad terms of the treaty—and the power it gives to ratifying states to decide for themselves whether they have violated it—has generated skepticism about how effective it will be in changing conduct.

Allowing countries to decide for themselves whether sales would contribute to or undermine peace and security is a giant loophole in the treaty, says Theodore R. Bromund, a senior research fellow at the Heritage Foundation, a conservative think tank in Washington, D.C. But actually, he says, “virtually any clause in the current ATT text could be problematic.”

But even if the treaty’s greatest impact is essentially moral in nature, advocates say that it’s an important milestone. “We have human rights and humanitarian law conditions imposed on the lawful transfer of weapons, and that is a first,” says Susan E. Waltz, a professor in the Gerald R. Ford School of Public Policy at the University of Michigan and a former chair of the international executive board of Amnesty International. “Establishing a clear prohibition against breaking U.N. arms embargoes was one main objective for the Arms Trade Treaty, and that has been secured,” she says. “The principle was arguably already there through some attenuated reasoning about the powers of the U.N. Security Council and the status of the U.N. Charter as an instrument of international law. But now the prohibition is written in black and white, and there for everyone to see.”

Rachel Stohl, a senior associate with the Managing Across Boundaries initiative at the Stimson Center, a D.C. think tank that studies global security issues, also views the treaty as a positive step. “There is a lot of idealism in the ATT,” she says. “But I think it is tempered with the realism about how the international arms trade works.”