'Umpire' blog is shuttered, but its judge-author is staying in the game

"I do think that all of us put our boots on in the same fashion. There's no harm—indeed I believe that there's some good—in acknowledging that," says Kopf, a senior judge for the U.S. District Court for the District of Nebraska, who prefers to be called "Rich" when he is not on the bench.

At the same time, he doesn’t claim to be a voice for the whole federal judiciary. And some of his posts at Hercules and the Umpire—the blog he started in 2013 and “ended forever” this year—caused controversy.

Kopf now admits it wasn’t a good idea to write about how female lawyers dress or refer to himself as a “dirty old man.” He says he also regrets a post in which he stated that Texas Sen. Ted Cruz, who is seeking the Republican Party’s presidential nomination, was “not fit to be president.” In the post, Kopf cited Cruz’s proposal to subject U.S. Supreme Court justices to retention elections.

Kopf pulled the plug on the blog this year after employees at his district court indicated that they found his blog-writing concerning. “I decided that if I was making folks in our court uncomfortable with the blog, I didn’t want to do it any longer.” 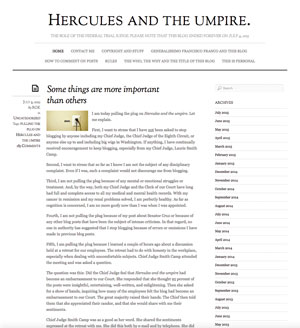 Hercules and the Umpire Blog

But Kopf has since started to write occasionally for other sites. He returned to the legal blogosphere in September with a post about federal sentencing reform for the blog Fault Lines.

Still, Hercules and the Umpire and its focus on judging is remembered fondly by readers.

Denise E. Frost, an attorney with Omaha’s Johnson & Mock, often appears before Kopf. She says his blog fostered discourse, which she appreciated.

“I thought there was some good done by pulling back the curtain and showing the judge as a human being,” she says, mentioning an April 2014 post in which Kopf wrote that he usually believes law enforcement officers instead of defendants. “He invited people to have a conversation with him about why he was wrong.”

Kopf’s commitment to judicial transparency in his blog even led him to criticize himself at times.

One of his posts dealt with his sentence of bank robbery defendant Shon Hopwood to 147 months in prison. Hopwood became a jailhouse lawyer while in prison and wrote a Supreme Court cert petition for a fellow inmate that was granted. Hopwood graduated from law school after his release and clerked for Judge Janice Rogers Brown of the U.S. Court of Appeals for the D.C. Circuit.

“Hopwood proves that my sentencing instincts suck,” Kopf wrote in August 2013. “When I sent him to prison, I would have bet the farm and the animals that Hopwood would fail miserably as a productive citizen when he finally got out of prison. My gut told me that Hopwood was a punk—all mouth and very little else. My viscera was wrong.” But does a judge’s position come with ethical limits on what he or she can blog about? After the aforementioned Cruz post, George Washington University law professor Orin Kerr, writing at the Volokh Conspiracy, questioned whether Kopf violated Canon 5 of the Code of Conduct for U.S. Judges, which forbids judges from endorsing or opposing candidates for public office. In a subsequent post, Kopf admitted that he thought Kerr was correct.

Kopf “walked over the line in terms of opposing or supporting a political candidate,” says Lucian Pera, a litigation partner with the Memphis office of Adams and Reese who also chairs the coordinating council of the American Bar Association’s Center for Professional Responsibility. Still, Canon 5 could be seen as unconstitutional under the First Amendment, Pera adds.

All ethical constraints considered, Kopf would like to see other federal judges try blogging. Though Kopf has some advice for those who do.

“Don’t try to write a post every day, like I did, and get an editor when you have doubts about the propriety of which you’re writing,” he says.

All indications are that another blogging judge would be welcomed. Legal readers appreciated the gutsy enterprise that was Hercules and the Umpire, lapses of propriety and all.

“The bright light he’s shone on the federal judge’s role, I think it took a substantial amount of courage to do that—courage I’m not sure I would have had,” Frost says.

And despite the controversy and the trouble it caused Kopf, Pera says, “I still think it’s remarkably refreshing that a federal judge would write a blog.”

What is the state of the legal blogosphere?