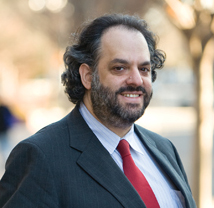 In his first two cases (both were sudden-acceleration disputes in which he represented the defense), Frank says, not only did the state appellate court approve “a bad jury verdict,” but the Center for Auto Safety disparaged Frank’s case as an example of everything that is wrong with car companies. The sting for Frank was that center founder Ralph Nader had been one of his early role models.

“I came to law school to be a consumer advocate,” Frank says, “and to discover plaintiffs lawyers—who were fighting for the little guy—pulling this scam was an incredible disillusion.”

Over the next decade, says Frank—who practiced at Kirkland & Ellis and Irell & Manella before litigating class action torts at O’Melveny & Myers—the time he spent defending cases without merit dwarfed the time he spent on justified lawsuits.

“There is so much wasted effort in litigation,” Frank says, “and so many startups brought to the brink of insolvency because of litigation costs.”

In 2005, after Frank wrote a series of posts on tort reform and legal policy on the blog Overlawyered, the American Enterprise Institute in Washington, D.C., offered him a fellowship to research the effects of the Class Action Fairness Act, which was enacted that year.

Last June, Frank founded the Center for Class Action Fairness, a nonprofit organization that represents consumers challenging class action settlements. Among the settlements that concern Frank are those that may provide millions of dollars in lawyers’ fees, while the class members receive little more than (rarely redeemed) coupons for more products from the company that wronged them.

The class action landscape has long included some “professional settlement objectors” who target large cases in hopes of extracting a percentage of the attorney fees as a reward. “But that doesn’t solve the problem,” Frank says. “The niche isn’t being filled unless you find somebody crazy like me who is willing to spend dozens of hours of his own time and hundreds of dollars of his own money to make a claim he can’t benefit from.”

Frank’s efforts to create the center were spurred by his objection to a $1 million settlement for attorney fees (less than $30,000 was allocated to class members) for In re Grand Theft Auto Video Game Consumer Litigation. Frank was a member of the class objecting to sexual depictions in the video game. The trial judge decertified the class, and that decision is being appealed.

Since then, the center has objected to seven settlements and has been retained by class members to object to two others.

In January, Frank notes, days before a fairness hearing in Lonardo v. Travelers Indemnity, a case in the U.S. District Court for the Northern District of Ohio involving homeowners insurance, plaintiffs attorneys “unilaterally agreed to reduce their $6.6 million attorneys’ fee request by $2 million and have that money revert to the class, which will now recover $5 million to $6 million instead of $3 million to $4 million.” Frank had filed an objection (PDF) to the original settlement.

“What Ted is doing is something very necessary: being there to protect classes from potentially collusive settlements between businesses and lawyers,” says Todd Zywicki, a George Mason University law professor.

TAKEN ON THEIR MERITS

Frank has accepted only 40 percent of the requests he’s received to object to a settlement: “If it’s a good settlement or close enough to the line, I don’t want to risk creating bad precedent,” he says.

The center is funded by benefactors of DonorsTrust, a charity “dedicated to the ideals of limited government, personal responsibility and free enterprise,” according to its website. To date, Frank hasn’t asked for or received attorney fees for his work, but he doesn’t rule out the possibility.

Frank is awaiting results in appeals of three adverse rulings to settlement objections by federal district courts. “The whole reason I started this is because there is a high probability of district courts rubber-stamping settlements,” Frank says. “I think these are very bad settlements that the [9th U.S. Circuit Court of Appeals] will … provide guidance for when judges should or shouldn’t approve settlements.”

District courts weigh several factors, including counsel’s time and labor, the requested fee in relation to the settlement and public policy issues, when considering lawyers’ fees. However, in practice district courts consider the plaintiffs attorneys’ lodestar, the hourly rate times the number of hours worked, as the baseline.

“The system needs someone like the center to come in and show courts that you’ve got to look at settlements fairly,” says Jeff Jacobson, a partner at Debevoise & Plimpton in New York City who, as defense counsel in the Grand Theft Auto case, opposed Frank’s objection.

If the center’s objections are successful at the appellate level, it may compel district courts to reduce the lodestar when the benefit to the class doesn’t justify that amount. And if a couple of objections are successful, Jacobson is optimistic tort reform will occur without legislation, because district courts will be on notice and defendants will be back in the game.

“Until the playing field at the scene of negotiation is settled, defendants have trouble fighting because they have more to lose than to gain,” Jacobson explains. “Ted is playing an important role. Plaintiffs [attorneys] should risk getting less than the lodestar if the case doesn’t warrant it.”