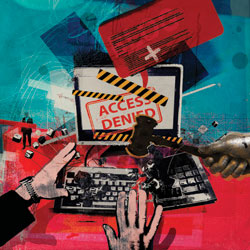 An attorney’s blog that primarily discusses cases in which he obtained successful outcomes for clients constitutes commercial speech subject to regulation under the state’s professional conduct code for lawyers, the Virginia Supreme Court has decided in a case that sheds some new light on the issue of how advertising rules for lawyers should apply to social media and other new forms of electronic communications.

“The decision could have a chilling effect on the speech of some of the most informed people in the United States when it comes to problems with the criminal justice system—namely, the attorneys who deal with it on a daily basis,” says Clay Calvert, an expert on media law who serves as director of the Marion B. Brechner First Amendment Project at the University of Florida in Gainesville. “Those attorneys may now fear posting their own views and comments on their blogs for fear their speech will be treated as commercial or violate state bar rules about self-promotion.” The project filed a joint amicus brief in the case with the Thomas Jefferson Center for the Protection of Free Expression, based in Charlottesville, Va.

At issue in Hunter v. Virginia State Bar (PDF) was a blog maintained by Horace F. Hunter, one of the two attorneys at Hunter & Lipton in Richmond. The noninteractive blog, This Week in Richmond Criminal Defense, which is accessible through the firm’s website, discussed a variety of legal issues and cases. But most of the posts described cases in which Hunter obtained favorable results for clients.

The bar also charged that he violated Rule 7.2 because his blog posts did not include prominent disclaimers, and Rule 1.6 on grounds that he disseminated client confidences without their consent. Hunter argued that his blog should not be subject to advertising regulations because it constituted primarily political speech rather than commercial speech, which the U.S. Supreme Court has held is entitled to a lower level of protection.

The Virginia bar ruled that Hunter’s blog violated all three professional conduct rules. The bar imposed a public admonition that included a requirement that he remove case-specific content for which he did not receive client consent, and that he post a disclaimer complying with Rule 7.2 on all case-related posts.

Hunter took the case to the Virginia Court of Appeals, which overturned the bar’s ruling that the blog violated Rule 1.6. But the court affirmed the bar’s determination that the blog violated the advertising rules. The court required Hunter to post the following disclaimer: “Case results depend upon a variety of factors unique to each case. Case results do not guarantee or predict a similar result in any future case.”

Hunter then appealed to the Virginia Supreme Court, which issued its opinion Feb. 28. The seven justices agreed unanimously that Hunter’s blog posts did not violate client confidentiality under Rule 1.6. In her majority opinion, Justice Cleo E. Powell reasoned that Hunter’s posts all dealt with public information about cases that had been concluded. “To the extent that the information is aired in a public forum, privacy considerations must yield to First Amendment protections,” wrote Powell. “In that respect, a lawyer is no more prohibited than any other citizen from reporting what transpired in the courtroom.”

But the court ruled 5-2 that Hunter’s blog posts were a form of commercial speech rather than political speech. The distinction often is outcome-determinative in First Amendment jurisprudence because restrictions on commercial speech are subject to intermediate scrutiny, while content-based restrictions on political speech generally are subject to a higher standard of strict scrutiny.

“Here, Hunter’s blog posts, while containing some political commentary, are commercial speech,” Powell wrote. “Hunter has admitted that his motivation for the blog is at least in part economic. The posts are an advertisement in that they predominantly describe cases where he has received a favorable result for his client.”

Powell also determined that while the posts were not inherently misleading, they were potentially misleading. Thus, the bar could require Hunter to post a disclaimer on all case-related posts, rather than just once, which the appellate court called for in its ruling. The supreme court reversed and remanded that part of the lower court’s ruling for imposition of disclaimers that fully comply with Rule 7.2.

Two justices dissented in part, finding that Hunter’s blog posts were political speech. “Speech concerning the criminal justice system has always been viewed as political speech,” Justice Donald W. Lemons wrote. “The majority does not give sufficient credit to the fact that Hunter uses the outcome of his cases to illustrate his views of the system.”

Hunter sought review by the U.S. Supreme Court, which denied certiorari on June 24. Now his intention “is to simply drop his blog and take it off the Internet,” says his attorney, Rodney A. Smolla, an expert on free speech issues who is a visiting professor at Duke University School of Law.

(In April, the Virginia Supreme Court adopted amendments to the state rules that eliminated Rule 7.2 but retained the disclaimer requirement as Rule 7.1(b). The amendments became effective July 1.)

Predictably, Smolla agrees in part and disagrees in part with the state court’s ruling. “My quite strongly held view is that Mr. Hunter’s speech should not have been treated as commercial speech,” says Smolla. “Hunter described, in detail, the proceedings of public criminal prosecutions. He spiced those descriptions with ideological commentary, reflecting his values as a criminal defense lawyer, regarding those public proceedings.”

But Smolla applauds the court’s handling of the confidentiality issue. “The Rule 1.6 issue was every bit as controversial as the lawyer advertising issues in the case,” says Smolla. “The important point for me was that neither the Virginia bar nor any of Hunter’s clients complained that he revealed anything that he was required to keep in confidence. Rather, everything contained in Hunter’s [blog posts] had been openly revealed in public judicial proceedings. For me, this was a critical First Amendment red line.”

Legal ethics expert Peter A. Joy takes a different view. “In effect, the Virginia Supreme Court has created a public records or public knowledge exception to client confidentiality, which erodes the duty of loyalty lawyers owe current and former clients,” says Joy of the Washington University School of Law. “Now lawyers can embarrass and humiliate former clients with impunity as long as they use confidential information that is in the public records. The court’s ruling is in direct contradiction with the rules of professional conduct.”

Smolla agrees that commercial speech is a ripe topic for the justices. “At some point in the not-too-distant future, the Supreme Court will feel obligated … to resolve the question of whether otherwise political speech may be treated by government regulators as ‘commercial’ merely because one of the motivations of the speaker is commercial,” he says.

“I believe,” Smolla adds, that the court “is somewhat long overdue in accepting review of a case that offers the opportunity to establish the borders of permissible speech by lawyers engaged in the sort of self-laudatory ‘puffing’ expression, often in the form of humor, parody, music or drama so common in other aspects of our mass culture, and so clearly protected by the First Amendment outside the realm of professional marketing.”

This article originally appeared in the November 2013 issue of the ABA Journal with this headline: “Commercial Ahead: Virginia Supreme Court holds that advertising rules may be applied to a lawyer’s blog.”