Want to be the next Miss America? Then you might want to hire this lawyer 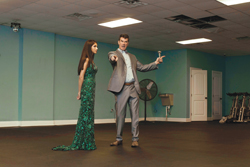 Bill Alverson has been practicing law in the small town of Andalusia, Alabama, for nearly a quarter of a century. Together with his son, William Alverson, they run a law practice that handles everything from personal injury matters to divorces and wills.
When he's not litigating, the senior Alverson moonlights at an atypical gig that is among his crowning achievements: He coaches beauty queens.

And he's really good at it. From the past three Miss Americas to a Miss USA and dozens of other contestants who have competed in various pageants, Alverson is the guy behind the glitz, glamour and, yes, brains of their victories. He schools aspiring beauty-pageant contestants on current affairs and myriad other topics, including how to make their skin glow under the glare of stage lights.

But beauty queens aren't his only acolytes. Alverson bills himself as a life coach who helps bring out the best in all kinds of people, whether they're preparing for a job interview or for a televised appearance before a panel of contest judges.

"It's not just pageants," he says. "Anything you do in life is an interview, whether you're at a cocktail party or a job interview. If you have self-awareness you can handle yourself in so many situations."

So how did Alverson expand his role as counselor beyond the legal realm? We asked him that and a whole lot more.

How in the world did you go from civil litigation to beauty queen coaching?

I worked in retail through college at a store called Todd & Sons that specializes in uniforms and corporate apparel. When I got to law school, I helped people learn how to present themselves. I helped them dress for interviews and talk through sound bites for clerkship positions. After I graduated from law school in 1986 and then clerked at the Supreme Court of Alabama, I moved to Andalusia. In 1992, a choir director at my church asked me to help a young, aspiring beauty queen in town. I did--and she won. Local people started calling me. I started getting more involved in judging at the local level and then in the Miss America system.

Do you only work with pageant contestants?

You charge $125 per hour for your services. What sets you apart?

I do it differently than most people who do interview prep. Most people prepare their clients for the immediate goal for that one interview. They lose the forest for the trees. You've got to have a continuum. I've formed somewhat of a system that I think leads to empowering women to know themselves and develop themselves, well beyond a pageant.

Can you reveal some of your secrets?

I develop things that would go beyond a resume, like the type of questions you might get asked at lunch or questions about pop culture. It's about what makes you connect with others while still showing your skill set, whether it is during an interview for Miss America or for a litigation specialist at a large firm.

You still run a busy practice at your father-son law firm, Alverson & Alverson. How do you keep up?

The demand comes and goes depending on whether a big pageant is coming up. It's just me and my son, so I can manage very easily if someone wants to come in for an hour appointment. And I often come back late at night to see a pageant client. It's nights and weekends at times. The law practice and court appearances come first, but we work around it.

Are there synergies between the two jobs?

The two are very similar. When you prepare a client for court, you're supposed to anticipate what the other side will do. In any legal situation we have that logical analysis. You have to always be relatable not only to your client but to a judge. The key thing for pageants, and also for being a successful attorney, is you have to develop trust. They've got to know that you can do the job.

You have to take those burdens off of them.

What about your personality makes you a good fit for this job?

I guess I have a keen sense of reading people.

What is the hardest part about your job?

With pageants, it is the honest discussion pertaining to the reality of winning when it's a hope but not probable.

Who is your most memorable client?

Scarlotte Deupree, Miss Alabama 2002. She was the first runner-up to Miss America that I coached. She is an amazing young woman. Scarlotte was the first one who really worked and it went beyond the pageant. She aptly says I take what's good and make it great. We remain close friends to this day.

What is the most useful thing you learned in law school?

Pride cometh before a fall. An arrogant person is subject to defeat by the exercise of his or her own self-made superiority.

This article originally appeared in the December 2014 issue of the ABA Journal with this headline: "There He Is ... Want to be the next Miss America? Then you might want to hire this lawyer."