What does it take to run a contest to find Bigfoot? 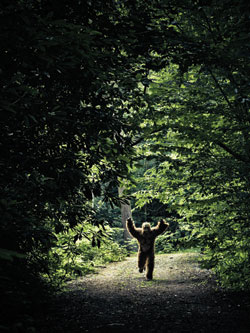 The contest, which started last spring and runs through March 31, offers a $1 million prize to anyone who can “ensure the safe capture of Bigfoot,” the giant, elusive apelike creature that some people believe inhabits the forests of the Pacific Northwest, where Olympia—which is owned by the Pabst Brewing Co.—is sold. The contest is no joke. Olympia partnered with the Falcon Project, a group that plans to conduct an aerial search for the creature with thermal imaging camera equipment, and it engaged an underwriter to put up the prize money.

“My two major concerns were: first, that we do no harm with this promotion—to Bigfoot or another animal or person; and second, whether we would be able to describe exactly what we were looking for regarding proof of Bigfoot’s existence,” says Stephens. “We had to make sure this was doable.”

For the first part, Stephens says she looked to legal models established for catch-and-release fishing contests, which she says are normally highly regulated to ensure proper handling of the fish. For the second, the contest team put hours into deciding what would constitute irrefutable evidence of Bigfoot and the wording of the rules. Those rules state that “there is no set type or amount of evidence required to establish proof” of Bigfoot’s existence. But that evidence may include DNA and/or visual proof of a live, physical body (so no footprints, skeletal remains or even video), and be judged sufficient by an independent, three-member panel.

And while the contest clearly states no harm can be done to the creature, the company had fun with the wording. “When we say safe capture, that means Bigfoot has to be alive and breathing, folks—with no wounds,” the website says. “That’s right, you can’t use any act of violence, no guns/knives/boxing gloves/nets/etc., only sugar or sweets to lure him in.”

“The idea was to create buzz for this small brand, and it really caught on,” says Pat McEvilly, president of Promotion Watch, the company handling management of the contest. “But between the underwriter, the insurance company and the public, there were a lot of moving parts that needed to be put together and addressed from a legal standpoint.”

There was also the matter of ensuring that the company only address legitimate claims. To that point, the contest website allows submission of either a “sighting report,” which it says is “for entertainment purposes only,” or a “capture report,” which it stresses involves “letting us know you have the Bigfoot in your possession and unharmed (or irrefutable evidence that Bigfoot exists).” At press time, there were more than 300 sighting reports filed, but no capture reports. Maybe those contest rules are a little too well-crafted?

This article originally appeared in the December 2013 issue of the ABA Journal with this headline: “On the Lookout: What does it take to run a contest for Bigfoot?”