Where the Buck Stops: Lawyers Need to Verify All the Nice Things Being Said About Them Online 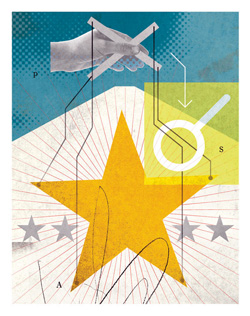 Majed Nachawati, one of the name partners in the Dallas law firm of Fears Nachawati, says he was stunned when he learned about a series of oddly coincidental online reviews of the firm by people purporting to be clients.

Random Google searches by the ABA Journal turned up a five-star review of Fears Nachawati by a certain “Rebecca.” But she didn’t stop there. Rebecca also gave five-star reviews to four law firms in San Antonio and another one up in Norman, Okla. She also gave top reviews to the North Dallas Spine Center and Culligan Water Conditioning.

And there were more coincidences.

Some of the reviewers posted their comments on the same day, so maybe it was just another coincidence that many of the reviews used similar language, including the phrase “best in Texas.”

Nachawati’s predicament isn’t a fluke. Pick a city and a legal specialty and throw them into a Google search. The odds are good that you’ll find questionable reviews. Random Google searches by the ABA Journal produced dubious reviews for a firm in Chicago and another in Miami. Neither firm responded to requests for comment, but the reviews disappeared shortly after the firms were contacted.

The dilemma also is an example of how ethics rules for lawyers intertwine with the often murky and mysterious ways of the Internet.

Contacting the “reviewers” isn’t possible; there is no link from their review pages or contact information for them.

A Google representative says it does not create reviews. Google leans toward a hands-off approach on reviews for Google Places, the function that allows businesses to be listed on a map along with reviews when users do certain searches. But the company has published criteria for removing reviews in its posting guidelines, advising users not to post “fake reviews intended to boost or lower ratings.”

The Google representative, who asked not to be identified by name, acknowledges that bogus reviews are a problem: “We want people to see ratings and reviews that are relevant, helpful and trustworthy. Unfortunately, not all reviews and ratings found across the Web are entirely honest or legitimate.”

Google has procedures for flagging questionable reviews. “We will then investigate if the review violates our guidelines and take the appropriate action,” says the representative.

Nachawati recognizes that at least some of the online reviews of the firm raise red flags, and he says he has asked Google to conduct an internal audit of them. “It obviously seems like there are some issues,” he says. “It’s a concern to us, and we take it seriously. We’ve in the past contacted Google and asked it to remove both positive and negative reviews because they seemed weird.

“I’ll tell you this definitively: We’d never have a contract with someone to provide positive reviews. And who would do that? I can’t imagine a reasonable lawyer wanting to do this stuff. It’s just not worth it.”

Nachawati hits the nail on the head: Commissioning fake consumer reviews—or even turning a blind eye to them—isn’t worth the potential trouble.

In 2009, the Federal Trade Commission published guidelines on pay-for-positive-feedback arrangements, essentially reiterating its long-standing principle that “material connections” like payments or free products between advertisers and endorsers must be publicly disclosed.

But for lawyers, an even more practical concern is that phony endorsements amount to violations of professional conduct rules for lawyers in just about every state.

“If lawyers are using people to write false reviews of the lawyers or the lawyers’ services, in my mind that’s blatantly unethical,” says Andrew M. Perlman, a professor at Suffolk University Law School in Boston who serves as chief reporter for the ABA Commission on Ethics 20/20. “The Model Rules of Professional Conduct make clear that lawyers can’t have advertising about their services that’s false or misleading. And another rule says you can’t use the conduct of others to violate the rules. If lawyers knowingly use people to create false or misleading comments about their services, that would be unethical, in my view.”

Four key provisions of the Model Rules—which serve as the direct basis for lawyer conduct rules in every state except California—come into play:

• Model Rule 7.1 prohibits a lawyer from making false or misleading statements about the lawyer or the lawyer’s services.

• Model Rule 7.2 states that a lawyer may, subject to certain requirements (including Rule 7.1), “advertise services through written, recorded or electronic communication.” But Rule 7.2 also states that a lawyer “shall not give anything of value to a person for recommending the lawyer’s services” beyond the costs of advertisements and charges for participating in a legal service plan or lawyer referral service.

• Under Model Rule 8.4, it is misconduct for a lawyer to violate or attempt to violate ethics rules “through the acts of another.”

• And Model Rule 5.3 states that a lawyer with general managerial authority at a firm, or direct supervisory authority over a nonlawyer employed or retained by the firm, must make reasonable efforts to ensure that the nonlawyer’s conduct would not violate professional conduct rules if engaged in by the lawyer.

WHAT YOU DON’T KNOW CAN HURT YOU

But the trickier question is how the ethics rules apply to situations in which a lawyer may not know that an employee or outside consultant, such as a marketing firm, is engaging in conduct on the lawyer’s behalf that amounts to a violation of legal ethics rules.

So what if you’re not particularly Web-savvy and you’ve hired a marketing company to create and manage your website and market your firm online? Are you vulnerable to ethics charges if the marketing company tells you it is common practice to commission or create fake reviews when it submits your firm for inclusion in Google Places—and you don’t object?

“Lawyers may not know the marketing service they’re subscribing to is using improper or fraudulent means to improve their search position or visibility on the Internet,” says James McCauley, legal ethics counsel for the Virginia State Bar. “But once they’re made aware of that fact, they can’t continue employing the vendor who’s using means the lawyer couldn’t use himself.”

On the question of what obligation a lawyer has to monitor his or her online marketing, Perlman says, “I don’t think there’s a black-and-white answer. But the lawyer has to take reasonable measures to have a reasonable assurance a marketing company is acting in a manner consistent with the lawyer’s professional obligations. It’s not a hard-and-fast rule that a lawyer must always do X and never do Y. That depends on the services the lawyer intends to use and what the lawyer knows and should know about them.”

McCauley maintains that law firms should take responsibility for policing and investigating what is being said about them online. “That would be an easy thing to do,” he says. “The argument from an attorney’s perspective is: ‘Come on, bar! I can’t spend my time scouring Google to find out what people say about me.’ ”

But if lawyers don’t make that effort, disciplinary authorities might do it for them.

“Our style of regulating advertising isn’t strictly complaint-driven,” says McCauley of the Virginia State Bar’s approach. “We look at blogs, Craigslist ads, Facebook pages and LinkedIn profiles, and we caution and warn. Our position is that if you have an online platform to market or advertise, and a third party makes a comment on your blog explaining how wonderful you are, you need to review it to be sure it’s accurate. You have an ethical obligation to affirmatively and periodically check your online resources to see what’s up there. If you don’t and bar regulators find it, you’re responsible for that content.”

Nachawati says there is another good reason for a law firm to monitor the online comments that are made about it. “You generate positive reviews by doing a good job, not by trying to manipulate search results,” he says. “I’m not interested in harming our firm’s credibility with these reviews.”