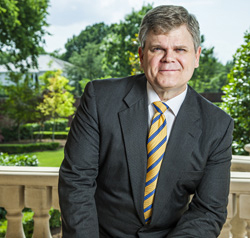 For many years in lectures, I’ve likened practicing lawyers, when it comes to writing, to 23-handicap golfers who believe that they’re equal to the touring professionals. For those not golfers, this would mean that pretty poor golfers—those who habitually shoot in the mid-90s but benefit from the big handicap—somehow fool themselves into believing that they really are shooting in the mid-60s, and that they’re about as good as it gets. I’ve been trying, in other words, to say that lawyers on the whole don’t write well and have no clue that they don’t write well.

Now, thanks to an erudite lawyer friend of mine in Atlanta, Scott Killingsworth, I’ve discovered that there’s a scientific explanation for this phenomenon: the Dunning-Kruger effect.

In 1999, two Cornell psychologists—David Dunning and Justin Kruger—conducted a series of studies showing that unskillful or unknowledgeable people (1) often think they are quite skillful or knowledgeable, (2) can’t recognize genuine skill in others, (3) uniformly fail to recognize the extremity of their own inadequacy, and (4) can recognize and acknowledge their own previous unskillfulness only after highly effective training in the skill. A further finding of great interest is that skillful people tend to overestimate others’ skills and underestimate their own.

These findings call to mind my practice of asking secretarial candidates, who invariably describe themselves as good spellers, to spell three words—such as idiosyncrasy, inoculate and anoint. Candidates rarely spell more than one correctly, and I gently correct them. Then, when asked by the next interviewer how they fared on my quiz, they usually answer something like “Quite well, actually.”

Let me posit a few conclusions about practicing lawyers as writers:

1) The profession suffers from a pervasive Dunning-Kruger problem.

2) Although lawyers in all areas of practice are affected, the incidence of the Dunning-Kruger effect is significantly higher among transactional lawyers than it is among litigators.

3) Although all experience levels of the practice are affected, the incidence is much higher among newly licensed lawyers than it is among experienced practitioners.

Admittedly, my conclusions aren’t drawn from clinical studies. But they are drawn from 25 years of law teaching, 22 of those years being heavily weighted toward experienced lawyers and judges. I’ve also taught law students throughout the past quarter century. With that in mind, let’s take a closer look at these conclusions.

1. The legal profession suffers from a pervasive Dunning-Kruger problem. This is puzzling but true. While lawyers are the most highly paid rhetoricians in the world, we’re among the most inept wielders of words. Stop and think about that. The blame goes primarily to the law schools. They inundate students with poorly written, legalese-riddled opinions that read like over-the-top Marx Brothers parodies of stiffness and hyperformality. And they offer law students little if any feedback (on substance, much less style) from professors on exams and writing assignments. But there’s plenty of blame that falls elsewhere. Writing standards have consistently fallen over the last century in secondary and higher education. (It would take a full-scale book to unpack that set of issues.) For law firm associates, their senior lawyers too often decry any emphasis on writing style (“I’m just concerned with the substance of it! I leave style to others!”). And in general society, serious readers are becoming an endangered species.

But in law—a learned profession—things should be better. To one who believes that any competent lawyer should be able to pen a publishable editorial for a major newspaper on 60 minutes’ notice, the current bar proves a disappointment. Please don’t view that statement as an offensive denigration but as a promising personal opportunity to rise.

When it comes to recognizing competence, an alarming number of lawyers can’t tell which of these clauses is a superior legal and linguistic performance:

(a) It is agreed that no waiver by either party hereto of any breach or default of any of the covenants or agreements herein set forth shall be deemed a waiver as to any subsequent and/or similar breach or default.

(b) If either party fails to require the other to perform any term of this agreement, that failure does not prevent the party from later enforcing that term. If either party waives the other’s breach of a term, that waiver is not treated as waiving a later breach of the term.

But of course you can tell.

2. Although lawyers in all areas of practice are affected, the incidence of the Dunning-Kruger effect is significantly higher among transactional lawyers than it is among litigators. Transactional lawyers have little idea how little they know. We could say a good deal about litigators’ failings, but the lapses in contract drafting know-how are huge. Ask three elementary questions:

• What’s wrong with using provided that; provided, further, that; or provided, however, that?

• What’s wrong with using such in place of this, that, these, those or the?

(I’ll give the answers at the end of this column, but please try to answer the questions yourself before peeking.) These are among the most elementary flaws of legal drafting—there are dozens more—but transactional lawyers go through their professional lives blithely unaware of the land mines they’re inadvertently planting in their documents—at least until litigation over those land mines ensues.

Again, we can partly blame the law schools here. Although the three drafting errors I’ve just mentioned have been well-documented in the literature for more than a century, they’re still ubiquitous in law practice. Most law schools don’t even teach the practicalities of contract drafting.

And practicing contract-drafters rarely get their papers “graded” as compared with litigators. Consider the highly publicized cases in 2012 alone in which courts thoroughly excoriated litigators who filed subpar briefs. That’s a strong motivator to do better. Transactional lawyers rarely suffer this negative experience.

3. Although all experience levels of the practice are affected, the incidence of the Dunning-Kruger effect is much higher among newly licensed lawyers than it is among experienced practitioners. This conclusion shouldn’t be surprising. The way to improve your writing is to have the stamina and self-confidence to seek and appreciate others’ editing or rewriting of your own work. Don’t fall into the trap of discounting it as just ego-destroying make-work by sadists bent on crushing you. Everyone—everyone—needs editing. You don’t need hand-holding, either: The editing or rewriting alone should be enough to teach you what you need to know, assuming you have the proper frame of mind.

Here some science comes into play. What does it take to master a skill? The popular science writer Malcolm Gladwell says, in his best-selling book Outliers, that you can’t truly master a skill until you’ve spent about 10,000 hours doing it. That makes perfect sense to me.

It also strikes me, however, that few junior lawyers have spent 10,000 hours writing. As the great William Prosser once said, a lawyer over the course of a career will probably write as much as a productive novelist. But it takes years before one starts talking about “the course of a career.”

Junior lawyers are neophytes. With newly minted law degrees, many of them think they’re ready to go. In fact, though, what they’re now ready for is an apprenticeship. May they be fortunate enough to have good mentors.

Oops. Dunning-Kruger again. Only a small percentage of lawyers will be great mentors, or will even know what might make them great mentors. It’s an intractable problem.

Funny thing, though. Bad golfers do tend to know they’re bad. Mediocre golfers tend to know they’re mediocre. In golf, there are qualifying tournaments. The four major championships aren’t weighed down by incompetent pretenders. But with an unscored activity like writing, the field gets crowded with the unskillful who have no idea that they’re unskillful.

Sometimes, I’m told, a brilliant legal writer will be asked to incorporate a sentence or two, unchanged, written by an inept one. It’s a bad feeling. How would the pianist Vladimir Horowitz feel about inserting a 30-second sound clip into one of his recordings? A sound clip played by a pianist who had hardly progressed beyond “Chopsticks”? It must feel awful.

The nonstylist will say, “Who cares? It works!” Maybe, maybe not. And: “There’s not that big a difference!” Oops. Dunning-Kruger again.

• What’s wrong with using herein? It’s invariably ambiguous. Courts have held it to mean everything from in this definition to in this subsection to in this section to in this agreement. Drafting experts have long warned that using herein borders on malpractice. For more about the problems caused by here-and-there words see Garner’s Dictionary of Legal Usage 407 (3d ed. 2011).

• What’s wrong with using provided that; provided, further, that; or provided, however, that? The troublesome phrase provided that—with or without an embedded modifier—has too many meanings and functions for clarity. It may mean except, if or also. It may create an exception, a condition or an addition. Further, it’s often unclear just how far back in the sentence the phrase reaches. Depending on how long the sentence is, it could stretch back 10, 20 or 100 words. For an example of how three provided that phrases vary in function and meaning within one paragraph, see Garner, Legal Writing in Plain English 107–08 (2001).

• What’s wrong with using such in place of this, that, these, those or the? It’s often ambiguous. When used as a demonstrative adjective, such typically means of that kind—as in “Extraterrestrial invasions and witchcraft? I’ve never believed such poppycock.” That means not just the two beliefs mentioned, but all similar kinds of thought. Lawyers use phrases like such property in such (ahem) a way that one can’t always be certain whether it’s the “property just mentioned” or “property of that type.” For more about such, see Garner’s Dictionary of Legal Usage 859–60 (3d ed. 2011).