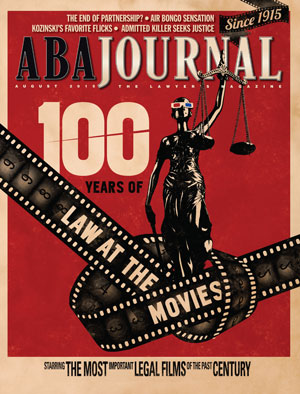 Academy Award-winning actress and Harvard heartthrob Natalie Portman announces that she has signed on to do a biopic on the life of Supreme Court Justice Ruth Bader Ginsburg, and law lovers everywhere come to a halt—Bluebooks drop in mid cite-check, throats go dry at oral arguments, billable hours stop for a minute (actually, just a second), and court watchers turn off Judge Judy and long for selfies with the glamorous Portman dressed in a black robe.

Football is America’s game, but movies are its favorite form of entertainment. And movies about the law are as essential to Hollywood history as cowboy Westerns or romantic comedies. Heroism that acquits the falsely accused will hold its own against any nonstop action flick.

When the American Film Institute published its list “100 Years … 100 Heroes & Villains,” defense attorney Atticus Finch from To Kill a Mockingbird topped the list, beating out Indiana Jones and James Bond. Finch, however, didn’t need a whip or gadgets from Q to earn the title or thrill moviegoers worldwide.

And Finch was no legal fluke, no flash in the pantheon of movie royalty. Other righteous defenders of the innocent made the list: Mahatma Gandhi in Gandhi comes in at 21, Juror No. 8 from 12 Angry Men holds spot 28, and Andrew Beckett—the corporate lawyer succumbing to both AIDS and its social prejudices in Philadelphia—made the cut at 49.

From Sophocles to Shakespeare, Dostoyevsky to Dickens, John Grisham to Scott Turow, the world’s great poets and dramatists, novelists and film directors have been enamored of the legal system for its plotlines and morality tales. Artists, in fact, are equal opportunity borrowers of justice both delivered and denied. Injustice can ruin a happy ending, but it can also open up possibilities for personal redemption. The literature of law values the object lesson over the cheap thrill. Audiences crave universal truths, and by the time the closing credits roll, movies about the law have left behind wisdom to live by.

But why is the law such an attraction for artists? Most practitioners of the law know that the work itself is often tedious and repetitive—more mechanical than original, more emotionally detached than fully human. There’s nothing cinematic about Bartleby, the scrivener, arched into his copyist’s pose. The vast majority of cases never make it to trial. The combative spirit of the profession is mostly confined to angry phone calls and sniping letters. Where is the movie in that? All that decorum leaves little chance of addressing grievances that are emotional in nature but get mistranslated into legal complaints. The bloodless captions of plaintiffs v. defendants mask a lot of the hurt that ends up as garbled legalese.

Why do readers and audiences care so much about characters who come before the law seeking fairness only to be coughed out of courthouses feeling embittered and helpless? Is it voyeurism or heroism we seek? Perhaps it is both—the misfortune of one, the treachery of another, the promise that the banging of a gavel will restore order and that a crusading lawyer will make us all feel less alone. There is great drama and mystery in how justice is fashioned. Standing up for another in a court of law can surpass the exploits of even the Man of Steel—with far less sweat and without all that heavy lifting.

A courtroom can be as riveting as any Colosseum or OK Corral.

Artists tell stories, and stories about the legal system are laced with human vulnerability. They are cinematic not because they are visual, but because the human experience—in all its complexity—is on full display. How else to explain the magnetism of 12 Angry Men? Nearly the entire movie takes place in a jury room. There are no car chases. Guns are never drawn. A murder takes place, but before the film even begins. The movement is limited to pacing men wearing pained faces, crowded into a jury room on a hot summer day. There is pervasive heat in an airless setting. Even the fan doesn’t work. Rampant prejudice and prejudgment serve as substitutes for thoughtful deliberation.

Yet, even though the film is shot in black and white, it is bursting with human color. Twelve men struggle with the task of balancing the evidence with their sum certainties and reasonable doubts.

Filmmakers find the choreography of the law irresistible. There are disputes between parties who possess vastly unequal resources. Impossible odds are sometimes lowered by timely intervention. The search for the truth is constrained by unseen obstacles, evil doings and trapdoors. Punishment is obligatory but also complicated. Sometimes restraint is what is most required.

The universal appeal of the revenge movie is the righting of a wrong. But to do so often means leapfrogging the law, taking justice into one’s hands. Yet revenge films are not entirely lawless. Their moral currency rests on the law having already failed. The avenger readies himself to settle the score only after justice is denied under color of law. When a wrongdoer seemingly gets away with a crime, the avenger—and the audience—are mobilized by the morally unbearable.

Basic distinctions between right and wrong are best explained through stories. That’s why storytelling is used to introduce children to the moral universe. And these stories, regardless of when they are received, enter through a different portal of knowledge. Whether around campfires, home entertainment systems or darkened movie theaters, the lessons learned enhance our moral development. And they linger long in our memories.

Movies about the law are not tutorials for budding lawyers but cautionary tales for enlightened citizens—an expression of our collective longing for justice and fair treatment. Most people realize that the legal profession looks more exciting, or functions more diabolically, in a movie; but they aren’t looking to pass the bar exam. They just want to be entertained and elevated—both at the same time. Artists see the world in a different light, and human beings are well-served in following that light—especially when projected onto a screen.

Finch naively informs jurors in To Kill a Mockingbird that the legal system is the great leveler where Rockefellers are treated no more favorably than common people. The plaintiffs who bring a toxic waste wrongful-death case in A Civil Action come to learn a different reality. Frank Galvin in The Verdict pleads with the jurors to look into their hearts before rendering their verdict, even though their hearts were never entered into evidence. The prosecutor Kathryn Murphy in The Accused realizes that she owes a duty to the victim that is no less important than the laws of the state she is charged with defending. In A Few Good Men, defense lawyers are reminded that trials are about discovering the truth, no matter how difficult it sometimes is to handle.

Of course, we know that the legal system often falls short of these ideals. In keeping with Hollywood tradition, movies offer happier endings than what are found in novels and plays about the law. Just ask Joseph K. in The Trial, Shylock in The Merchant of Venice, the Isaacsons in The Book of Daniel, Bigger Thomas in Native Son, and just about every dreary soul in Bleak House how much bleaker things are in the literature of law than in the magical world of movies.

After all, in movies, having one’s day in court is possible. Neither procedural delay nor incessant discovery will stand in the way of a protagonist taking the stand or prowling the courtroom in lawyerly, gladiatorial fashion. Films about the law generally do not settle for less than justice. It is a small irony that justice is more likely to be found in movie houses than in actual courthouses, where the burden of overcrowded dockets is keenly felt and the cynicism about actual justice is widely shared.

Law film junkies are no different from other moviegoers: Everyone, to some degree, is looking for an escape from reality. For a few hours spent in the dark, imagination is transported elsewhere and disbelief is suspended—at least until the closing credits. It is during these moments when the lawyers of our dreams come to our defense, where judges are wise and jurors are merciful and the entire system of justice can be depended upon to uplift the human spirit and answer its prayers for relief.

Thane Rosenbaum is a distinguished fellow and director of the Forum on Law, Culture & Society at New York University School of Law, which hosts the annual FOLCS film festival. He is a regular adviser and contributor on law in popular culture for the ABA Journal. He helped assemble the panel of judges and fine-tune the movie ballot for this issue.

A Century of Legal Films

This year marks the 100th anniversary of the ABA Journal, so we’ve been exploring the legal and cultural history of the past century. For our annual pop culture issue, we looked for the best legal movies released in the decades since our launch in 1915. What follows is our list of the most important and influential legal movies for each decade, along with comments from some of the jurors who helped us with our picks.

To determine the ballot and make selections, jurors used criteria adapted from Professor Christine A. Corcos, who created a list of must-see movies for law students.

Jurors considered the following six elements when choosing the most important and most influential movies of the defined decades: