With Charity to All--Except for Scammers: Tougher Laws Seek to Nail Bogus Nonprofits 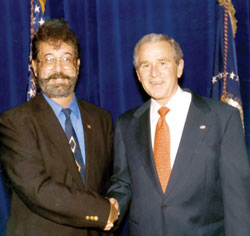 For a boiler room operation, the U.S. Navy Veterans Association was particularly successful. Since launching in 2002, the group raised an estimated $100 million from donors throughout the country.

Its leader, supposedly a retired lieutenant commander going by the name Bobby Thompson, made contributions to the campaigns of several Republican politicians, including Virginia Attorney General Ken Cuccinelli and Minnesota Rep. Michele Bachmann. Thompson was photographed buddying up to the highest echelons of the GOP: President George W. Bush and political strategist Karl Rove.

But an exposé last year by the St. Petersburg Times revealed the U.S. Navy Veterans Association to be something other than it claimed. According to the series, none of the organization’s 80-plus board members could be found, the address for its national headquarters turned out to be a mail drop, and Thompson disappeared after the paper started asking questions.

Authorities concluded that “Thompson” was an alias and that only a small portion of the money raised went to charity. Former Ohio Attorney General Richard Cordray obtained an indictment against Thompson for identity theft, racketeering, money laundering and theft. A former associate of Thompson’s, Blanca Contreras, pleaded guilty in Ohio to several crimes, including theft and money laundering. In Au gust, she was sentenced to five years in prison.

A LACK OF SCRUTINY?

Now some reformers are holding up the U.S. Navy Veterans Association as the poster child for the types of abuses that can occur when charities operate without scrutiny. The reformers say the way to prevent such scams is to ensure that law enforcement can monitor charities before donations are misspent.

In July, the National Conference of Commissioners on Uniform State Laws voted to approve the Model Protection of Charitable Assets Act, which explicitly gives attorneys general jurisdiction to investigate charities and ensure that their assets are used in accordance with the charities’ mandates. The model act additionally requires charities with more than $50,000 in assets in a state to register with authorities in that state, provided the charities have their principal place of business in the state or were formed there.

Supporters say the act will provide a much-needed update to the laws governing charities. The intent is to give donors, charities and their advisers a road map to the complex area of charitable regulation, says Hugh Jones, a deputy attorney general in Honolulu and former president of the National Association of State Charity Officials. “This is not some sinister attempt at a ‘power grab,’ ” he says.

But others criticize the model act, saying it could impose burdensome regulations on all charities. “Non- profits are raising a question as to whether this is really necessary,” says Des Moines attorney Willard L. Boyd III, immediate-past chair of the Nonprofit Organizations Committee of the ABA’s Business Law Section. He says opponents argue that federal tax laws already require comprehensive disclosure.

Currently, charities in most states don’t need to comply with reporting mandates beyond filing with the IRS. Additionally, although some states explicitly empower attorneys general to investigate charities, others lack such laws. In those instances, attorneys general argue that they have jurisdiction over charities under common-law principles, but the extent of that power is subject to debate.

University of Oregon law professor Susan Gary, who serves as a reporter for the drafting committee, says the model act was driven by the National Association of State Charity Officials, whose members say they need to know what’s going on before nonprofits’ money disappears.

“Being able to get information early would be very helpful, so they can keep an eye on things better,” she says.

Unfortunately, by the time a problem of fraud comes to light, the money is usually gone, Gary says. Often that’s because when officers plunder a charity, the victims—that is, the donors—aren’t in a position to be aware of the financial misdealing, much less to complain to the authorities.

Indeed, when scams are uncovered it’s often a result of independent probes by the media or other outsiders. The U.S. Navy Veterans Association is only one recent example. In January 2010, the Washington Post Magazine ran an exposé of Baltimore-area rabbi Menachem Youlus, who claimed to rescue Torahs hidden or lost during the Holocaust. This August he was charged with fraud and accused of siphoning money from his foundation, Save a Torah.

Additionally, earlier this year, investigations by the TV show 60 Minutes and author Jon Krakauer questioned the charity founded by Greg Mortenson, author of Three Cups of Tea, the highly influential book about the U.S. presence in Afghanistan. The reports alleged that he diverted some of the charity’s money for his own use, and that the group didn’t build all of the schools it said it had. Mortenson and the charity’s board have denied the allegations.

Potential abuses of charities aren’t limited to fraud or embezzlement. Investigations by major newspapers in the last decade uncovered such dubious practices as paying directors exorbitant salaries or making interest-free loans to officers.

But groups like the First Amendment advocacy organization Free Speech Coalition say that the potential for abuse doesn’t justify new reporting requirements that could drain the resources of smaller organizations. In February, the coalition argued in a letter to the drafting committee that new laws are unnecessary.

“On those rare occasions where fraud exists, there are sufficient existing laws to remedy such problems,” the group wrote.

Mark B. Weinberg, co-counsel of the Free Speech Coalition, based in McLean, Va., says the act could end up affecting advocacy groups’ ability to operate, or even launch, because the reporting requirements could prove too costly. “It imposes barriers to entry,” he says. While the model act excludes political lobbying groups from its definition of charities, it still could apply to a host of other nonprofits that take stances on controversial issues.

The drafting committee aimed to address those concerns by imposing the $50,000 threshold for reporting. An earlier version of the model act would have required charities with assets of more than $5,000 to register. But Weinberg says that even with the change, the measure is still too burdensome.

Mark Fitzgibbons, president of corporate and legal affairs at American Target Advertising, a direct marketing group for nonprofits based in Manassas, Va., adds that each state could require separate paperwork, which could prove onerous.

“Dealing with charity regulators is always more difficult than you think it will be,” he says. “They bounce back applications, they modify the laws, they come up with interpretations of their authority that are quite interesting.”

Critics also question the wisdom of allowing law enforcement to demand an organization’s records without judicial oversight. The model act specifies that attorneys general may subpoena records from charities when they have “reason to believe an investigation is necessary to determine whether action may be advisable.”

But opponents proposed stricter requirements, saying that attorneys general shouldn’t be able to demand an organization’s records unless they already have enough evidence to bring a complaint. Fitzgibbons says the problem is that the model act’s “reason to believe an investigation is necessary” standard doesn’t protect charities’ rights to be free from unreasonable searches and seizures.

He also argues that the model act’s very definition of charity leaves room for interpretation. For instance, the model act leaves it up to individual states whether to require religious organizations to register. Even the drafters, however, had problems figuring out how to define religious organizations, so they offered four alternative definitions for states that want to exclude such groups.

“If they had focused in on a clearer bill that had good definitions and no registration requirement, it could have done some good,” Fitzgibbons says. “The way it turned out, it’s pretty awful.”

Nevertheless, authorities are still hunting the trail of the mysterious Thompson. He won’t be the last scammer that investigators will be after.