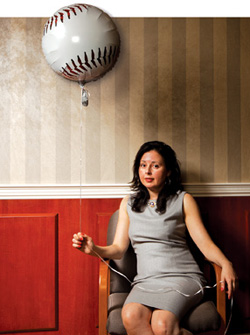 Carla Varriale says she couldn’t have built a national presence in the male-dominated specialty of sports law without social media. “I’ve got appearances on TV and clients I might not have been otherwise exposed to,” says the partner at Havkins Rosenfeld Ritzert & Varriale in New York City. “It opens up so many additional doors.”

Has Varriale expanded her business because social media levels the playing field for women and requires skills that women excel at—like communication and relationship building? Some women say yes.

‘THE POWER OF A VOICE’

Varriale says social media has given women a platform they never had. “I still think of women as a minority, certainly in law firm partnerships,” she explains. “If you view social media as the power of a voice you otherwise don’t have, I don’t think that’s an issue for men. The fact that you have an automatic presence online is certainly an advantage.”

However, Bob Ambrogi, a solo who specializes in media and technology law in Rockport, Mass., says social media is about flexibility, whatever the user’s gender.

“Social media levels the playing field for people who need more flexibility in their professional lives, but I don’t know that’s necessarily gender-specific,” he says. “It’s a set of tools for marketing yourself that requires no significant [financial] investment, and allows you to operate from wherever you happen to be and on whatever schedule works best for you.

“It might favor women insofar as women often, because of family obligations, require more flexibility in their careers and lives. But I’m a stay-at-home dad who works out of a home office and finds the same advantage.”

As for the idea that social media plays to a perceived feminine advantage in nurturing relationships, Nina Kaufman is a believer. “It’s a medium that’s better suited for women because it’s about relationship building,” says the New York City solo.

Dallas solo Amy Elizabeth Stewart says she’s cultivated more relationships with women than men through social media. However, she adds, men skilled at relationship building, as well as introverts of both genders, can get results.

“Social media is a nonconfrontational way to develop real social relationships with people who can impact your success,” she says.

There’s also an argument that social media may allow women to prosper in a universe where blatant self-promotion is frowned upon.

“There’s still somewhat of a reticence on the part of women to toot their own horn the way men do,” Kaufman says. “Social media isn’t about sales: ‘Read my ad, buy my product.’ It’s about how I’m providing value, which is its own reward.”

However, women aren’t shy about promoting others, which achieves the same results. “Women, from my experience, tend to be a lot more supportive of their friends, and they’ll take the time to connect more deeply and share their accomplishments on social networks,” says Erin F. Giglia of Montage Legal Group, a network of 20 female freelance attorneys in Irvine, Calif. “Men can do this, and they do. I just think women do it more.”

Despite the debate, the bottom line may be that anybody can succeed big—and bomb equally so.

“I see both men and women who are quite effective at communicating on social media,” says Ambrogi, “and others of both genders who fail miserably at it.”