Comic Book By Teens Gets to the Basics: 'I Got Arrested--Now What?' 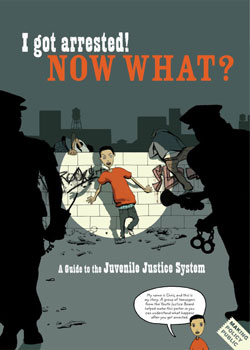 While most teenagers are still trying to figure out what to do with the rest of their lives, 16-year-old Khaair M. knows exactly what his future holds: “I want to run for mayor of New York City.” Khaair credits his budding interest in government and public policy to his work with the Youth Justice Board. Run by the nonprofit Center for Court Innovation in New York City, the Youth Justice Board helps high school teens develop leadership skills and learn about public policy and government. The board also serves as a vehicle for policymakers to hear what kids have to say about the public policy issues affecting their age group.

The yearlong program offers teens the opportunity to study issues they consider important. Participants learn about civics and public speaking, conduct research and interviews, and interact with policy makers. The program culminates with the development of a pol icy proposal presented to local officials.

Most of the Youth Justice Board participants are between 14 and 18 and hail from the New York public school system. Some of them have had personal experience with the juvenile justice system, but all are inspired to learn more about how they can effect change by learning about public policy.

“All of us came in with the mindset that we wanted to change something in New York City,” says Khaair, a senior at Francis Lewis High School in Queens who didn’t want his last name published. “I feel like the youth of New York City don’t have representation—and we really need a voice, especially for the stuff that involves us.”

In previous years, the board’s work was limited to making policy recommendations, but this year the center wanted students to have a tangible, final product as evidence of their work. The 18-member board created a comic book to help New York City’s young people understand the juvenile justice system.

I Got Arrested! Now What? is a four-page instructional pamphlet that now is distributed to anyone under the age of 16 who is arrested on delinquency charges in New York City. It takes young readers on an easy-to-follow journey from booking to sentencing by breaking down com plicated legal concepts into language they can understand. For example:

“File a Petition: This is what it’s called when the Law Department decides to bring a case to Family Court.”

“Remand: When the judge decides to send you to a detention facility during your case.”

“Parole: When the judge sends you home during your case instead of putting you in detention.”

Information in the comic book was compiled through interviews with lawyers, probation officers and judges, as well as parents and kids who have experienced the juvenile court process.

“From my perspective the comic book embodies one of our core beliefs—that knowledge is power,” says Greg Berman, director of the Center for Court Innovation.

The comic book was so well-received that Berman plans to add a second year to the Youth Justice Board program. The new “action year” will allow participants to go from idea to actuality.

“You cannot imagine the sense of pride and accomplishment when they saw the results,” Berman says. “To devote all this time and energy and deliver a product out of nothing—there’s nothing more powerful than that. In some small way I think this is a contribution to making government more transparent and to increasing public faith in justice.”