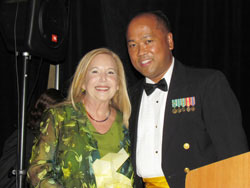 Alan DeWoskin still chuckles at the thought of the controversy surrounding the formation in the 1970s of the solo and small firm committee within the ABA’s General Practice Section.

“People felt that you could not be a sole practitioner and be involved in an important ABA position,” says DeWoskin, a former chair of the now-renamed Solo, Small Firm and General Practice Division. “Today it sounds ridiculous.”

My how times—and perceptions—have changed. The division is now the fifth-largest within the ABA with nearly 25,000 members, and it continues to grow in numbers and stature as more and more lawyers hang shingles.

The ABA formally recognized this sea change in membership—and in the profession–when, at this summer’s annual meeting in Chicago, the House of Delegates unanimously agreed to the name change.

“While it may be clear to the active members of the ABA that GPSolo is the home of the solo and small-firm lawyer, it is possible that it may not be clear to lawyers that are new to the ABA, thinking about joining the ABA or have never been active in GPSolo,” states the division’s report to the House in support of its name change resolution.

“By moving ‘Solo and Small Firm’ in the division’s name, it would be of great benefit to the ABA and also send a clear message to the solo and small-firm lawyer population (both within and outside the association) that the ABA, through the division, is doing all it can to meet the needs of this underrepresented population.” This theme was echoed repeatedly to the nearly 250 members attending the 50th Anniversary Gala Celebration at the Westin Hotel Seattle during the division’s fall leadership conference—as well as by past, present and future division leaders.

As more lawyers become sole practitioners—by choice or necessity—their need to be a part of the organized bar has become more apparent. “It’s amazing how lawyers, once they leave the large law firm setting, become more attuned to professional organizations because they are now alone,” says DeWoskin, a sole practi-tioner in St. Louis. This recognition also is a significant change for the division. When it was formed 50 years ago as the General Practice Section, it became a home for those in the ABA who felt otherwise homeless. Military lawyers, judges, in-house counsel and lawyers with general practices all joined the section, forming a loose-fitting but cohesive group for those without substantive practice specialties. But sole practitioners—especially those from small towns and rural settings—were not especially welcome.

“It’s had a really interesting evolution,” says Christine Meadows, a Portland, Ore., lawyer who served as co-chair of the division’s 50th Anniversary Committee. “We have evolved because more and more practicing lawyers are solos or in small firms. That has made people more focused on meeting their needs.”

As current chair of the division, Benes Aldana plans to “think forward” by continuing to focus on areas that will demonstrate the value of the division to existing and new members.

“With the current economic situation, the trend shows that most law school graduates and even practicing lawyers are moving into the solo and small-practice field,” says Aldana, a captain in the U.S. Coast Guard who is chief counsel in the Legal Engagements Division for the U.S. Africa Command in Stuttgart, Germany. “So it’s even more important today that the division provides the cutting-edge tools and resources to help these lawyers adapt to a shaky economy and to accommodate new technology. That means our CLE and practical skills offerings need to be about how to make our members become better lawyers and help them mind their practice—which means growing it into a business.”

Jennifer Rymell, chair-elect of the division, also plans to continue to shape the division to help solo and small-firm lawyers. As a judge in Tarrant County, Texas, Rymell sees many young lawyers who have hung out their own shingle because they were otherwise unable to find jobs due to the economy. She knows this trend is a nationwide one and plans to focus her year as chair on helping new lawyers who have gone solo to learn how to practice law and run a law firm.

Among her plans is an effort “to identify programs and resources in each state to help young lawyers start their practice,” she says. She also wants to continue to build the Solo and Small Firm Resource Center on the ABA’s website. For example, Rymell says that the Texas Young Lawyers Association offers a popular CLE called Office in a Flash to help attorneys get their practice up and running. The division will collect those sorts of resources and put them in one place, “so if a new lawyer in Washington gets out of school, he can look on our website and see what is available.”

The division also convened in Seattle a first-of-its-kind bar leaders dialogue with representatives from national, state and local bar associations to discuss best practices, programs and the sharing of resources to assist this growing segment of the lawyer population.

The division also will continue to focus on its good works and commitment to diversity and pro bono programs, says its immediate-past chair, Laura Farber of Hahn & Hahn in Pasadena, Calif. Farber, who initiated the Kids in Need of Defense project within the division, says its leaders are committed to the program for the next four years. KIND trains lawyers to represent unaccompanied children pro bono in immigration proceedings.

During Farber’s tenure the division also sponsored programs to help female- and minority-owned law firms become certified as such to help them engage in business opportunities reserved for them from various state and local governmental agencies. And it brought “virtual brown bags” to division members on issues such as technology and some substantive legal areas, as well as offering practical office management tips. Farber says the idea behind the virtual brown bags was to bring programming directly to members who might otherwise not be able to come to formal ABA programs. “It’s really important to think about how we can come to you and help,” she says.

To that end, Meadows sees the division continuing to be a leader in technology programming for its members as the practice of law continues to change. “There will be an evolution in terms of how we deliver legal services,” she says. “I anticipate that a lot of that is going to happen at the solo and small-firm level because they have more flexibility. I think a lot of innovations will be driven by technology and client demands. As a division, we can help support that and spark some initiatives.” 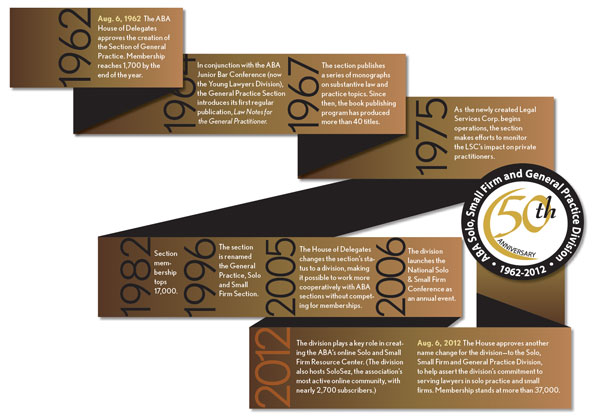 Aug. 6, 1962: The ABA House of Delegates approves the creation of the Section of General Practice. Membership reaches 1,700 by the end of the year.

1967: The section publishes a series of monographs on substantive law and practice topics. Since then, the book publishing program has produced more than 40 titles.

1996: The section is renamed the General Practice, Solo and Small Firm Section.

2005: The House of Delegates changes the section’s status to a division, making it possible to work more cooperatively with ABA sections without competing for memberships.

2006: The division launches the National Solo & Small Firm Conference as an annual event.

Aug. 6, 2012: The House approves another name change for the division—to the Solo, Small Firm and General Practice Division, to help assert the division’s commitment to serving lawyers in solo practice and small firms. Membership stands at more than 37,000.