Zombies-at-Law: NY Lawyer Fascinated by the Law's Fascination with Zombies 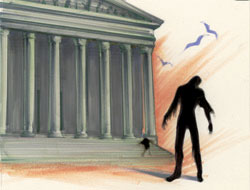 Warren has been dutifully tracking the number of times zombies (the word, not the undead) has appeared in opinions and, if he has his way, he’ll also be publishing a textbook on the topic.

Warren began noticing the increasing use of the word zombie in the mainstream media last year as part of his work pursuing a PhD in cognitive studies in education. He soon began sending his fellow doctoral students links to different zombie-containing articles. When the word took off in connection with the Pennsylvania “Zombie Muhammad” case, Warren’s interests began to take shape.

And when the media began referring to a “bath salts”-induced attack earlier this year in Florida as a zombie attack, Warren knew he was on to something. “That’s when the blog started,” Warren says about ZombieLaw, which he saw as an outlet for his growing interest in the use of the word zombie by the courts.

To date he has noted the use of the word zombie in more than 300 federal court opinions.

Most, he says, come from Social Security disability cases as a layman’s way of describing certain medical conditions. But the use of the word is exploding in a variety of legal opinions and materials. Even federal judge Richard Posner has incorporated it into his writings, and the word has found its way into at least one SCOTUS opinion, Warren says.

Warren learned that the word zombie came to the U.S. by way of Haiti in the early 20th century before becoming assimilated into horror movies. He wants to write a legal textbook-style treatise on zombies and the law to help teach nonlawyers about the profession and about reading case law.

He started a fundraising campaign on Kickstarter to help finance the project, and by early October Warren had raised the entire $4,666 he needed to breathe life into his zombies.