10 common misconceptions about the Constitution

On this date 228 years ago, the delegates to the Constitutional Convention signed the Constitution. To celebrate Constitution Day, we offer you a little trivia about the document which forms the foundation of our republic.

We enlisted the help of Robert J. McWhirter, whose new book Bills, Quills, and Stills: An Annotated, Illustrated, and Illuminated History of the Bill of Rights was released this year by the ABA. McWhirter, a criminal defense lawyer from Phoenix, has provided us with a list of 10 common misconceptions or lesser-known facts about the Constitution and the Bill of Rights:

1.) Most voters today would not have had the right to vote under the original Constitution. Women, blacks, Catholics and white men without substantial property could not vote. Abigail Adams wrote a charming, though pointed, letter to her husband John Adams on March 31, 1776 reminding him “To Remember the Ladies.” But it was not until the 15th Amendment that the Constitution gave black men the vote, and not until the 19th Amendment did it “remember the Ladies.”

2.) Many of the rights we take for granted were not granted by the original text of the Constitution. For instance, the right to travel comes from Magna Carta in 1215; Magna Carta is also the source of our right to due process, and the common law gave us the presumption of innocence in a criminal cases. The Framers provided for no universal public education and no workers’ rights. Sure the original Constitution recognized the right to a civil jury, a habeas corpus petition, and a prohibition on ex post facto laws. But beyond those, the main right that the 1787 Constitution gave was to keep slaves—hardly a promising start!” 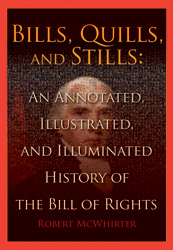 4.) The word “democracy” never appears in the Constitution or Bill of Rights. We do not live in “a democracy,” but a republic. James Madison and Alexander Hamilton argued in the Federalist Papers that democracies were a disaster.

6.) Most of the Framers believed a Bill of Rights unnecessary. This was because in their view, the federal government had only the power the Constitution specifically gave it. Alexander Hamilton argued a Bill of Rights was redundant because the states had their own bills of rights and “the Constitution is itself, in every rational sense, and to every useful purpose, a bill of rights.”

7.) The Bill of Rights was not, originally, 10 amendments. Madison took over 200 proposals from the states and political leaders and submitted 17 to Congress, which he largely based on George Mason’s Virginia Declaration of Rights of 1776. The House approved all 17 amendments, but the Senate rejected some (including Madison’s favorite on protecting conscience and the press) and combined others.

8.) The First Amendment was not originally first. It started out as the third amendment. (So much for the hortatory speeches that “the First Amendment is so important because the Framers put it first!”). In fact, the Framers originally put it after an amendment regarding the size of the Congress and another related to Congress’s pay. The original “first amendment” never passed, but the states did ratify the original “second amendment” concerning congressional salaries on May 7, 1992, making it the 27th Amendment.

9.) Several states did not immediately approve the Bill of Rights. Connecticut, Georgia, and Massachusetts never got around to ratifying it until the sesquicentennial of the Constitution in 1939.

10.) The Constitution begins and ends with the People. Its first words are “We the People”. If we count the Bill of Rights as part of the original Constitution, which we generally do and should, the last words of the Constitution are the Tenth Amendment’s reservation of rights “to the people.” The People are first and last the source of government power and legitimacy.

Did you already know all this? Think you know the Constitution inside and out? Try this quiz to test your mettle.