14 years after Sept. 11 attacks, families of victims and others await justice 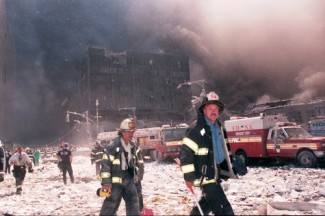 New York City firefighters walk near the area known as Ground Zero after the collapse of the Twin Towers on Sept. 11, 2001 in New York City. Anthony Correia / Shutterstock.com

Fourteen years after the September 11, 2001 terrorist attacks, the legal system is still dealing with those alleged to be responsible for the hijacked commercial airlines that crashed into the World Trade Center, the Pentagon and a field in Pennsylvania. (The fourth plane is thought to have been headed toward another Washington, D.C., target before passengers brought it down.)

In Guantanamo Bay, Cuba, five men accused of masterminding the attacks are still awaiting trial after more than a decade in U.S. custody, Yahoo News reports. A military judge put the case against Khalid Sheikh Mohammed and his associates on hold earlier this year after accusations that an FBI informant had tried to infiltrate one defense team.

Meanwhile, consolidated litigation that accuses Saudi Arabia and other defendants, including some banks and charities, of helping to fund the attack by lending material support to terrorism is proceeding in federal court in Manhattan.

Attorney Jim Kreindler, who chairs a plaintiffs’ committee, had estimated from the beginning that the case likely wouldn’t be resolved for at least 15 years, the Wall Street Journal Law Blog reports. More details about the case are provided by a New York Times (reg. req.) article published earlier this year.

Throughout the country Friday, memorial services were held, and memories of the attacks that killed 2,977 people and sent planes, people and buildings crashing down on those below still sear.

Even those who didn’t lose family members or friends in the attacks say it affected their view of the world.

Shocked, disbelieving and amazed at the news, he was reminded by the attack that “we live in a world that is full of hate and sin,” he told USA Today, and that “America is not sheltered from the world.”

ABAJournal.com: “Defense lawyers say they think US may be eavesdropping on client talks in Gitmo terror cases”